‘Star Wars: The Rise of Skywalker’: Full galaxy of goings-on packed in a 42-year escapism pod 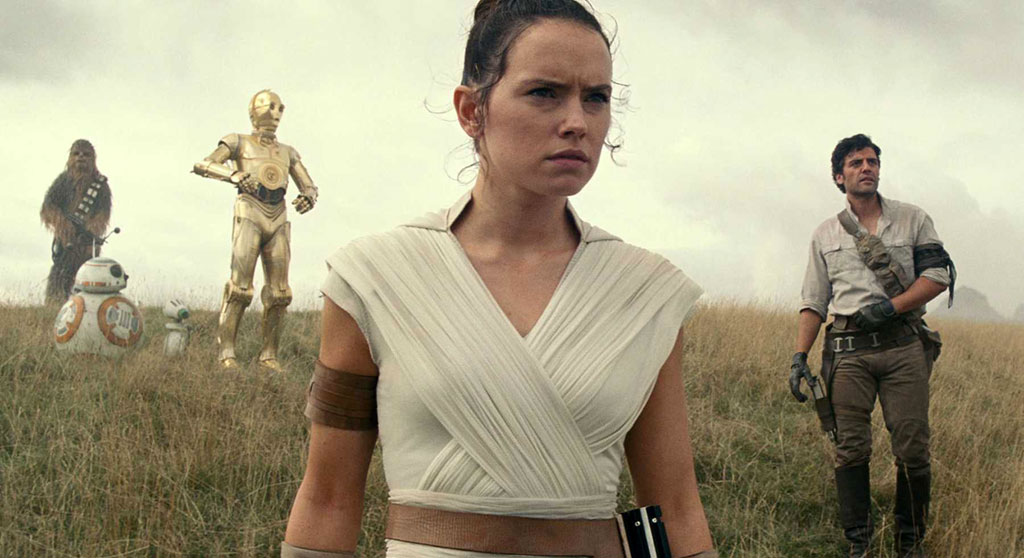 ‘Star Wars: The Rise of Skywalker’: Full galaxy of goings-on packed in a 42-year escapism pod

More than 40 years in the making, the “Star Wars” trilogy of trilogies finds its way to the end – kind of. Not that we (those who saw the original “Star Wars” in theaters in the days before Fandango or the Internet) ever thought it would really be made into the extended triple trilogy envisioned by George Lucas. But with Disney managing the final three of “The Force Awakens” (2015), “The Last Jedi” (2017) and now “The Rise of Skywalker,” there’s been a revival of excitement that went missing when the inert, Lucas-helmed prequel series of the late ’90s and early 2000s neutered the frenetic fandom of the original “Star Wars” (1977) and the enterprise’s crowning jewel, “The Empire Strikes Back” (1980).

Just because you build it doesn’t mean you own it. That’s something Lucas learned in 1980, when he turned “Empire” over to Irvin Kershner and then returned to make the less-than-satisfying “Return of the Jedi” (1983). J. J. Abrams, who so brilliantly rebooted the “Star Trek” franchise and gave great lift to the “Star Wars” sequel trilogy with “The Force Awakens,” gets Lucas-ed himself with this latest chapter, which tries to do too much in the name of nostalgia. “Rise of Skywalker” feels more like a Disney theme park experience than an organic narrative. Everything but Yoda and the kitchen sink (and blessedly no Jar Jar Binks, perhaps the most obnoxious incarnation ever to grace the screen) are in it. Han Solo (Harrison Ford), Princess/General Leia (Carrie Fisher, eerily from beyond), Luke (Mark Hamill), the remains of the old Death Star, Ewoks and even Billy Dee Williams show up. The latter, with his smooth, amiable grin, almost saves this hyperdrive-driven mashup by himself. Of course, the pivotal triad of Jedi-in-the-making Rey (Daisy Ridley), stormtrooper-gone-good Finn (John Boyega) and rebel ace Poe (Oscar Isaac) are the focus, but none of the three – all fine actors – are Billy Dee Williams.

What’s to know? Well, there’s a lot about bloodlines. We all know Darth Vader’s protege, Kylo Ren (Adam Driver) was formerly known as Ben Solo, but who made Rey? All that’s gets answered, but first Finn, Poe and Rey must take out a massive fleet of imperial starship cruisers, each equipped with planet-killing cannons, and Kylo is hot on their heels due to a pact he has made with the Dark Sith Lord because (somebody cue up the Tears for Fears) everybody wants to rule the world – well, galaxy. Yes the tired trope of the battle between good and evil and pull of the Dark Side (they live in shitty, light-starved dungeons, so I don’t get the appeal) gets bandied about as sleek spaceships zip through narrow confines and lightsabers buzz. There are some really neat action sequences (Rey taking out a cruiser with a lightsaber tops them all), but most feel overstaged or worse, video-game lackadaisical. And that’s the problem with “Rise of Skywalker”: There’s never any real peril or character development.

As much as I tip my hat to Abrams for getting the whole shebang back on track, Rian Johnson helmed “The Last Jedi” with greater breadth and depth and might have been the better choice here. As is, “Rise of Skywalker” feels like an intergalactic chess game that we know the outcome of, but don’t particularly care about. Fortunately there are the droids – and though BB-8 and R2 are cute, they don’t endear so much here. The real fun is the dicey reboot of C-3PO (the droid played by Anthony Daniels through all nine chapters) and the human-shy (from abuse) duck-like droid that says “No thank you” a lot. And, yes, it’s a win to see Chewbacca re-team with Willams’ Lando Calrissian, as well as Keri Russel as a former spice bootlegger who ran with Poe, wearing sleek garb that’s something of an unholy cross between Ant-Man and the Wasp’s superhero costumes (since Disney now also owns the Marvel Universe, it probably required only an internal memo to filch the design).

For the record, this guy who saw the 1977 “Star Wars” in a second-run theater (Newtown, Connecticut’s Edmund Town Hall Theatre) refuses to refer to it as “A New Hope,” as it’s been revised and retconned with all the Episode III, IX, V, etc., tags. If you need a table of contents and a rebranding to make it all make sense, where’s the fun? As is, IX doesn’t feel like a closing chapter. There’s closure and revelation, but there are also seams enough for another 40 years.