‘A Hidden Life’: We see Austrian reject Nazis, stick around with Malick for all that follows 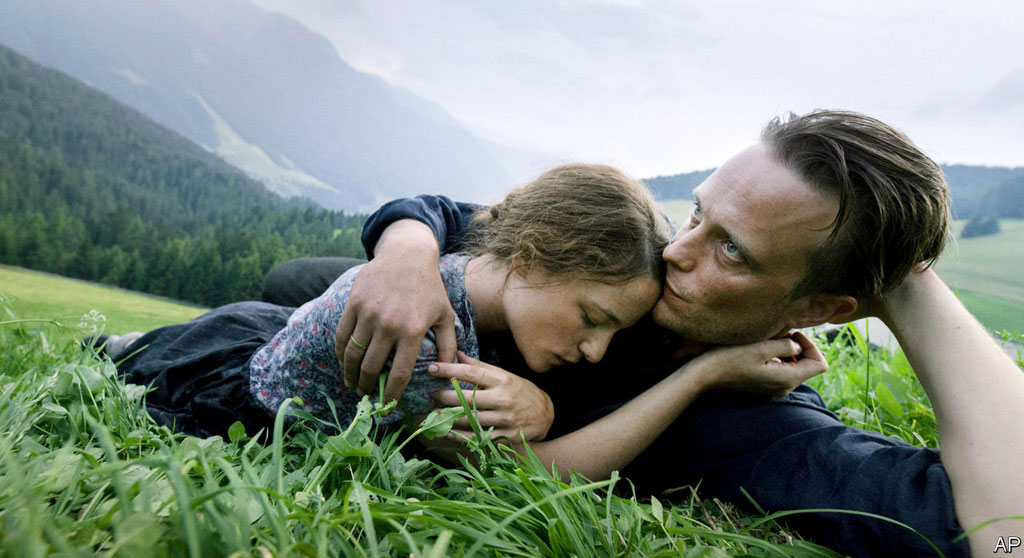 ‘A Hidden Life’: We see Austrian reject Nazis, stick around with Malick for all that follows

There’s a moment three-quarters of the way through Terrence Malick’s exhaustingly self-indulgent new film that sums up the story’s message in moment of blink-or-you’ll-miss-it brevity: The protagonist, while imprisoned, stops in a shop to right an umbrella that’s fallen. It’s a small act of grace, a gesture of reactive and instinctual kindness, that acts as the heart, soul and thesis of “A Hidden Life” but is threatened to be swallowed whole by the sheer excess of it all. We are all human and each have a responsibility to the world and those who exist alongside us to live and act with virtue. This responsibility is the platform on which Malick’s film rests, employing again an omnipresent narration to tell the story of one of the many unsung heroes lost to history trying to find humanity in a world torn apart by war. 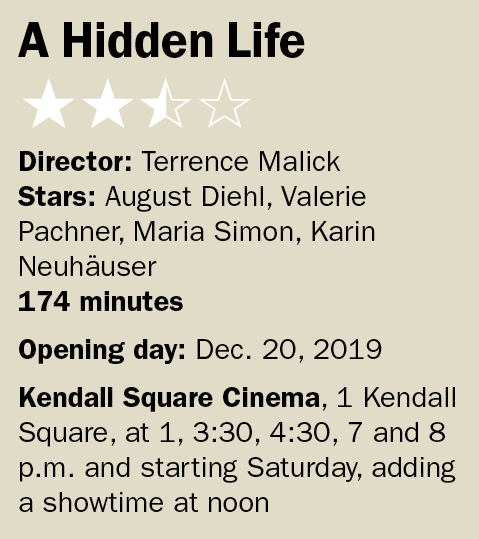 The narrative tells the true story of Franz Jägerstätter (August Diehl) and his wife Franziska (Valerie Pachner), Austrian farmers working diligently and providing their daughters a life of love and stability. But their quaint lives begin to unravel at an upsetting speed during the onset of the Second World War when Franz refuses on moral grounds to fight for the Nazis. He is faced with the threat of execution for treason and his wife and daughters become ostracized by their tight-knit society; staunch faith keeps his soul and heart sturdy as this act of martyrdom threatens their very right to existence in this new world.

The minutiae and technicalities of “A Hidden Life” are indisputably flawless. You don’t reach the heights Malick has without an innate understanding of romanticism in film, no matter the bleak or seemingly hopeless nature, and he, along with cinematographer Jörg Widmer and editors Rehman Nizar Ali, Joe Gleason and Sebastian Jones, have put visual lyricism to screen. The world shown is rendered with such vibrancy – the greens of the central duo’s home pastures, the blues of the skies that box them in, the brown of the mud that coats their fingertips – that it amounts to a textured world more reminiscent of an oil painting than film. The silence of nature is celebrated further because it represents unsoiled freedom; there is a clear beauty in isolation to be found among the wilderness Malick & Co. present to us.

It’s directed by Malick with camera movements that sweep the lush countryside as if caught in the act of staring off into nature, and written by him with a purposeful repetition that explores the life of the family so fully that a small act of kindness by Franz later in the film feels familiar and commonplace. We watch as Franz and Franziska plow their fields, play with their daughters, walk home and seek comfort in one another’s embrace again and again, and then again some more. We then watch as Franziska toils in the field with her sister, her husband long absent, their rugged, blistered hands holding as much of the physical world as possible as they feed the mouths of animals and children, dig through a dried-up well for water, cradle each other’s faces and persevere as grief overtakes them. Malick, especially latter-day Malick (from the superb “Tree of Life” to the unmoored “Knight of Cups” and “To the Wonder”), displays great passion for the routine, embodying it through characters stuck in a cycle of self-destruction or in depicting the mundanity – and beauty – of an everyday life.

There’s a noted linear structure this time around, which allows some greater moments of triumph and losses that hit harder, but it’s weakened by a script that digs its heels into the ground. The emotional wallop of the ending is stunted by the tedium of getting to that revelatory moment of symbiotic connection to the earth and god. “A Hidden Life” is a tremendous display of filmmaking in sheer scale that builds on emotional blocks of storytelling from the beginning. The loftier moments are held together with charismatic performances by Diehl and Pachner, and the will of the fight and unflinching smile in Franz, the persistence of Franziska in the face of her world crumbling, the aching score by James Newton Howard – all build to a momentous and enlightening crescendo.

But the pacing is glacial, and the story doesn’t warrant it. This year Martin Scorsese and Quentin Tarantino created masterwork codas to their decadeslong careers with films that ran the clock either close to the three-hour mark or well over (“The Irishman” and “Once Upon a Time … in Hollywood” respectively.) Last year, Lynne Ramsay displayed her finest work, and it ran a tight 90 minutes. Edward Yang’s “A Brighter Summer’s Day” (1991), a personal favorite, hits four hours. There’s no rule about a film’s time limit, and there’s an argument here that we’re not simply being told a story of grace, but experiencing one.

“A Hidden Life” is an ode to the men and women whose actions make them heroes, whether history acknowledges them or not, whose stories add the gravelly texture of the world. There’s an abundance of empathetic beauty to glean from the picture that makes the tedium largely bearable. But in the execution here lacks, the story growing looser, less of salt and soil and more a thesis that’s abandoned its gravity for great pieces of ideas. The beauty remains, the soul falters and with it our focus. For the Malick completists it’s a must-watch, a mark of a filmmaker’s reset after a few artistic stumbles. For others, it’s as simultaneously bloated as it is thinned out, too consumed with ideas and allegories to put enough thought into the final, emotional swell that could have left us stunned by the time the credits silently roll. Vexing and infuriating, and made all the more so by how stupefyingly stunning the entire picture is, “A Hidden Life” needed someone to pull the visionary behind the camera back from some of his more indulgent fantasies.