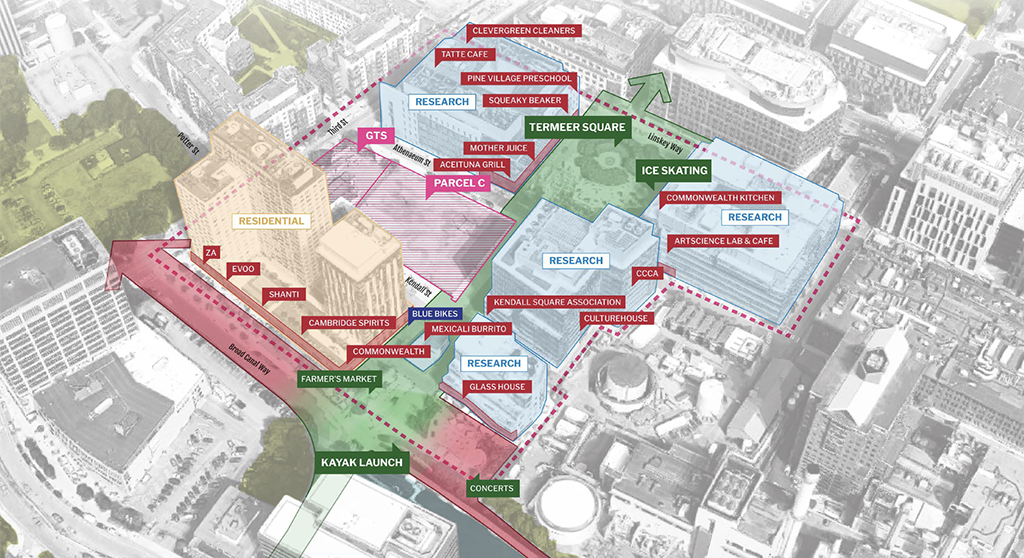 Canal District Kendall is moving forward with zoning centered around space once intended for the Constellation Center for the arts. (Image: BioMed Realty)

All nonessential public meetings are through April 30, and health officials encourage social distancing to prevent coronavirus exposure and the spread of infection. But with no systems in place for full civic engagement, these are meetings members of the public may yet feel it is important to attend.

City municipal buildings and their departments close to the general public at 5 p.m., Monday until further notice, except for City Hall staying open for the City Council meeting on Monday, said Lee Gianetti, director of communications and community relations. Information about the remaining meetings would come Monday, he said.

Update on March 16, 2020: Meetings, including the Monday meeting of the City Council, will no longer be conducted in public and open and physically accessible to the public, but will be accessible to the public remotely and will allow for participation by the public through alternative means, officials said in a 2:50 p.m. email. The public is encouraged to submit testimony and comments at cambridgema.gov/remotepubliccomment.

Public comment will be available electronically starting at 5:30 p.m., with participation by phone or computer at zoom.us/j/9246600496. Instructions on using the technology will be posted on the City’s Open Meeting Portal, officials said.

“Given the current public health crisis, these operational adjustments are necessary to protect the general public and to be able to transact necessary business for the time being. We appreciate the public’s patience as we navigate through this together,” Mayor Sumbul Siddiqui said.

City Council, 5:30 p.m. Monday. The big topic will be the city’s response to the nationwide coronavirus outbreak, bringing together not just a report on preparedness from chief public health officer Claude Jacob but orders from councillors, including a call to “cancel, postpone or shorten all nonessential in-person meetings until further notice, including non-urgent committee meetings and regular meetings where no urgent business will be transacted” and arrange for public comment periods in which the public doesn’t have to be present; and asking for a mobile testing and information center; bank-style dividers to be installed at more city service counters; and guidelines for staff to work from home. The outbreak will likely overshadow the annual surveillance report and a $4 million request by the city manager for the Complete Streets Reconstruction Program and to repave streets in the separated bicycle network (and forwarding of a Cycling Safety Ordinance for discussion), and even a call for a real estate transfer fee home rule petition. Councillors are also calling for bigger fines for absentee property owners who aren’t doing their part to prevent a rat infestation and for the city to join a state test of automated traffic enforcement. Also, BioMed Realty is filing its request for a big “planned unit development” zoning relief in its Canal District Kendall, where it has plans for the long-empty space where we once expected a Constellation Center just for the arts.

Ordinance Committee, 5 to 7 p.m. Tuesday. This committee run by city councillors Dennis Carlone and Marc McGovern will talk about changing the definition of family in the Cambridge zoning ordinance away so the law encompasses not just households of people with blood ties, but also people “living as a single nonprofit housekeeping unit,” formalizing group living situations that already exist around the city.

School Committee, 5:30 p.m. Tuesday. There’s a bare-bones agenda that includes passage of items including next year’s district calendar as, but also hearings on a proposed School Department budget and the Student Opportunity Act, a state plan to direct money to districts that have higher-performing pupils – obliging districts to set targets for “addressing persistent disparities in achievement” and show how they’ll do it. Update on March 17, 2020: This meeting has been canceled and budget hearing and workshop postponed to a so-far unidentified date.

Planning Board, 6:30 p.m. Tuesday. A seller of recreational marijuana called The KG Collective wants to open at 701-703B Mount Auburn St., West Cambridge, near the Star Market and the Watertown line. The site has 1,756 square feet of retail space and another 2,235 square feet just for storage and offices. Also, Mitimco wants to change how it’s doing traffic mitigation in its East Campus area in Kendall Square, and the Crimson Galeria in Harvard Square has some design updates to present for its upward expansion for offices and residential units.

This post was updated March 15, 2020, with information about the closing of municipal buildings starting Monday.