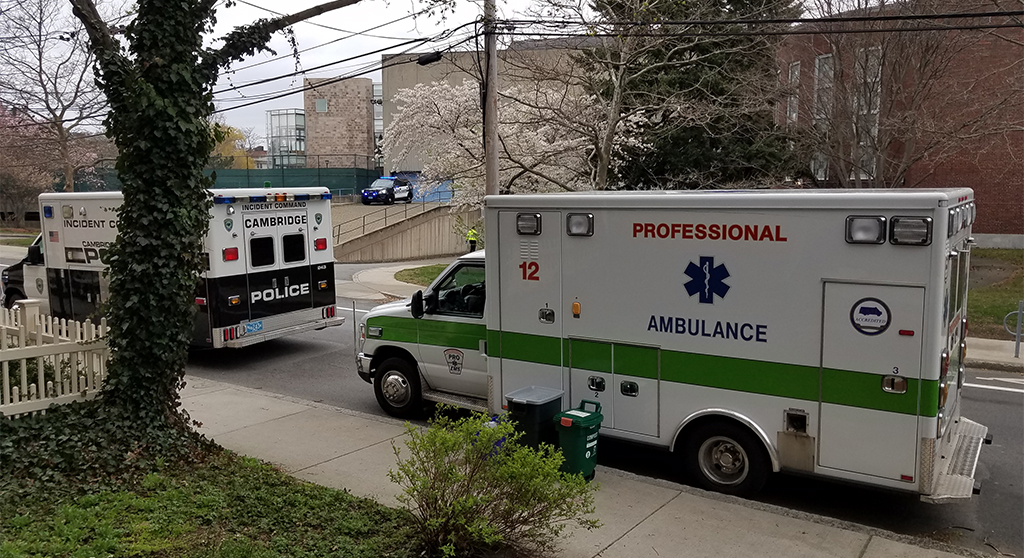 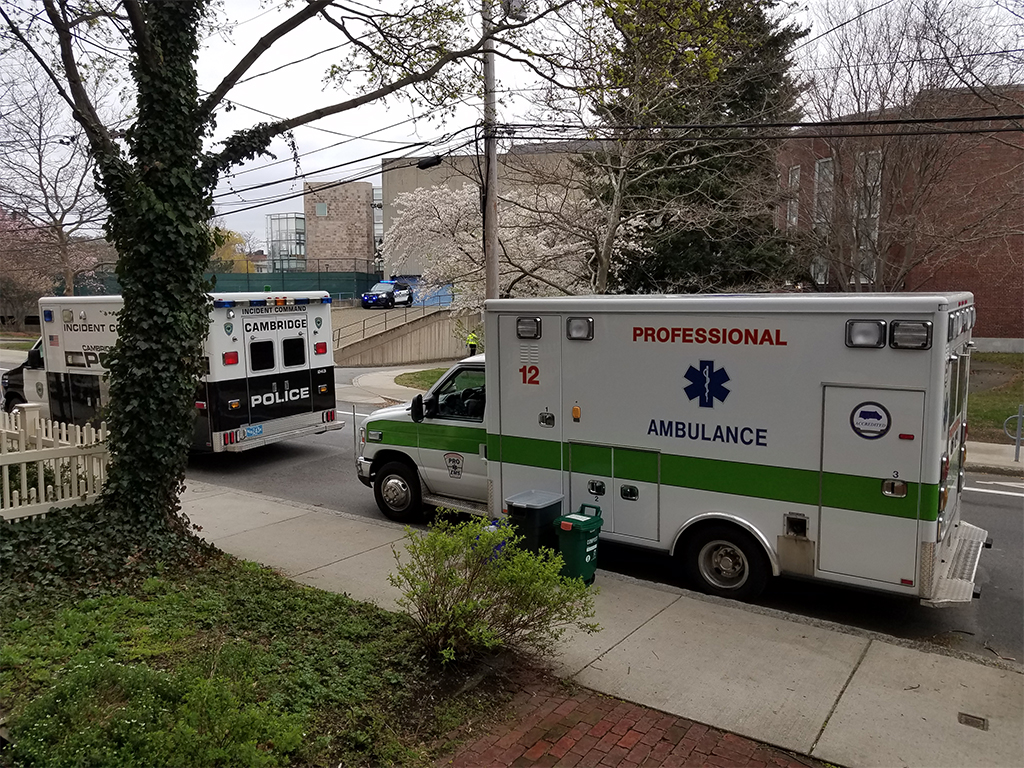 First responder vehicles are parked on business at the temporary homeless shelter at the War Memorial Recreation Center in April.

Money for a winding-down homeless shelter

City Council, 5:30 p.m. Monday. This is supposed to be the week we hear a Cambridge “reopening” plan. Otherwise, this light-looking agenda includes a lot of moving around of dollars from one account to another as needed to pay for things as mundane as firefighters’ hand sanitizer, as well as $150,000 in Covid-19 tests for use as needed. The biggest request is $2.2 million for the cost of running the temporary homeless shelter at the War Memorial Recreation Center, after construction costs were paid through a $500,000 donation from Harvard and the Massachusetts Institute of Technology. Open since April 18, the field house living area holds some 60 people nightly (though more than 80 people are “registered for admission”). A quarantine area open since April 14 closed Friday after having been used by 15 people over the weeks; and a planned isolation unit was never used because the state housed infected people at hotels outside the city. There are also few hot-button items on the councillor side of the agenda, though there might be some comment on a call for the governor to end a restriction on reusable bags. There are now studies that prove reusable bags are at least as safe as plastic when it comes to transmitting coronavirus, and likely more safe, say councillors Patty Nolan and Quinton Zondervan – with the biggest deniers being the plastics industry.

The meeting will be televised and stream online. Sign up for public comment here to get instructions about how to use the necessary Zoom video conference platform.

Making up for bad semester with a smart summer

School Committee, 6 p.m. Tuesday. Even with the final quarter of classes being graded simply for credit or no credit, rather than on the A to F scale, some committee members worry that the coronavirus shutdown led to fewer seniors graduating than in years past; they’ve asked the superintendent to provide figures and provide ways for lagging seniors to still graduate by the end of the summer. They also want all online curriculum from the school year to stay available to students over the summer, and to create a “parent university” that will make parents “partners in the education of their children.” And they’re looking over the border to what Somerville has done to provide Internet to students who lack it at home, and want to hear back from staff by June 26 which options Cambridge Public Schools should add.

To give public comment, signup is mandatory and can be done through noon Tuesday by phone at (617) 349-6620 or 5:30 p.m. online at www.cpsd.us/school_committee/virtual.The meeting will be broadcast over Cambridge Educational Access TV channels 98 and 99 and should stream online. More information is here.

Finance Committee, 9 a.m. Tuesday. This committee run by city councillors E. Denise Simmons and Dennis Carlone continues looking at the proposed $715 million municipal operating budget for the next fiscal year, up $35 million (or 5.1 percent) over the current year, with $312 million of the total for capital projects. This meeting has some 19 areas for exploration, including big-ticket items such as the Cambridge Health Alliance and Community Development Department, some smaller commissions and some overarching items, such as “cherry sheet” expectations (the term for what funding the city expects to get from the state).

The meeting will be televised and stream online. Current instructions say to sign up for public comment here and watch via the Zoom video conference platform to give it.

Finance Committee school budget hearing, 6 p.m. Wednesday. It’s time to look at the proposed $214 million in school district funding. Last year, when the full budget came to a vote, dissatisfaction over school district funding resulted in only 7-2 approval, with the minority formed of councillor Quinton Zondervan and then-councillor Craig Kelley. Voting in favor but also under “protest” for school department failings was E. Denise Simmons, who is a co-chair of this committee. We’ll see how it goes this year, but there’s more likely to be frustration over uneven remote learning than over the previous biggest issue: the district’s persistent academic achievement gap.

In the moderate chaos that is public comment procedures these days, sign up to speak here and participate during the meeting via the Zoom video conference platform using this link. There are phone-only instruction here. The number to enter when Zoom asks is: 967 4380 5129.

There is also a Finance Committee hearing possible at 9 a.m. Thursday, if deemed needed after earlier hearings.