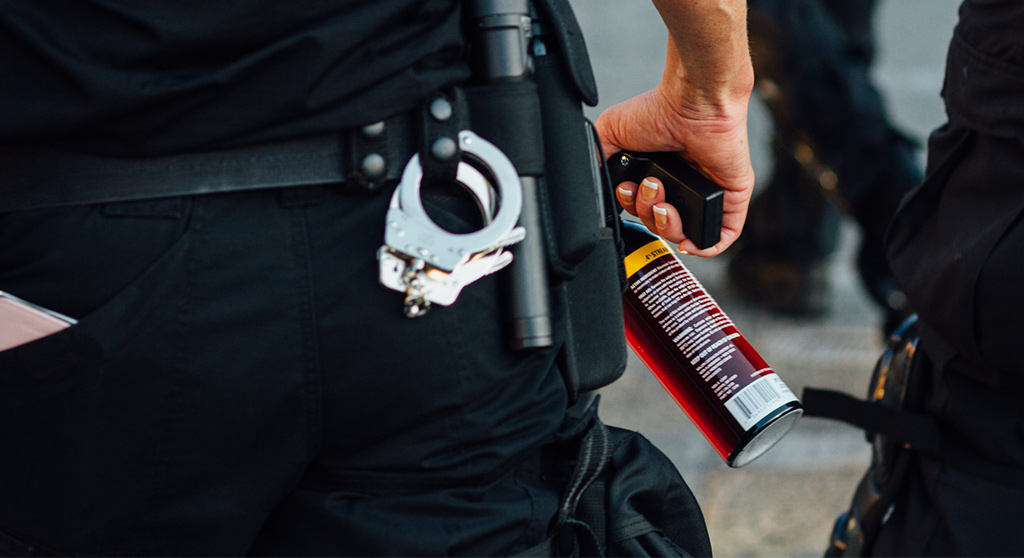 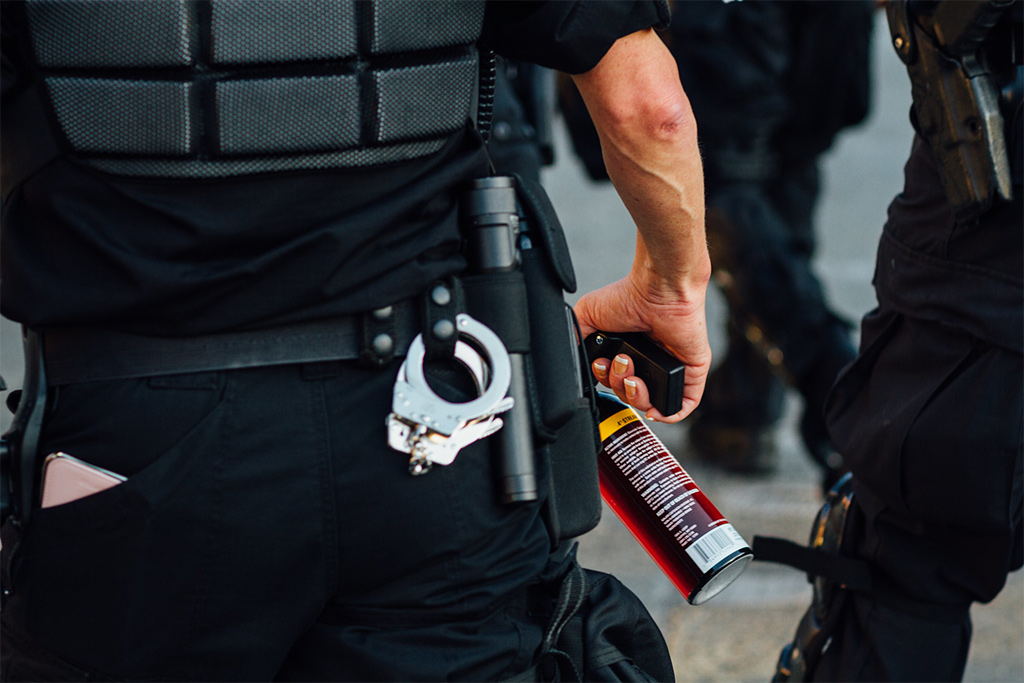 Each Cambridge police officer is equipped with a canister of pepper spray. This image is from a Seattle May Day protest in 2016. (Photo: Adam Cohn via Flickr)

When hell was breaking loose nationwide this summer, with police in riot gear clashing with protesters in city streets choked with smoke and gas, Cambridge’s top law enforcement official assured the City Council that things were different here.

Certainly that’s true in that none of Cambridge’s protests grew violent. But an expert from the protester’s side of the police barricades has a predictably different take on an assurance the council was offered June 1:

There are 278 sworn officers on the force, each carrying pepper spray canisters. (The equipment doesn’t appear on the inventory released in July by police, which said it skips “duty gear already issued.” The list did include 13 large canisters of MK-9 pepper spray that the department said could be used by specially trained members of its Special Response Team brought in for crowd control. It’s these that Bard referred to as unused for decades.)

Cambridge officers must report when they use pepper spray, and the police department’s most recent use-of-force wrap-up shows that was 37 times in the five years ending in 2018. In the first year of the period, there were seven uses; the next year, six. The peak was in 2015 with 10 uses of the spray, dropping by half the next year and in 2018. The lowest was in 2014, when it was used four times.

How the department made policy about tear gas is hard to say, because the officers with firsthand knowledge of the decision-making process have retired from the force, said Jeremy Warnick, director of communications and media relations for Cambridge police.

But is it better that pepper spray is made of natural materials? And is there an appreciable difference felt by the person who has been sprayed by pepper spray instead of tear gas?

The spray is made from red pepper, resin and oil. “It is not classified as a hazardous chemical [and] has no history of long-lasting side effects or aftereffects. In over a decade of field experience, there has never been any substantiated instance of adverse reaction to the spray by any subject with respiratory illnesses, heart problems or poor reflexes,” Warnick said in an email.

A one-second burst to the face will hurt the eyes and skin and hit the respiratory system, but cool water will speed up recovery, “as the oily OC resin will be easily rinsed out,” Warnick said. Symptoms might be gone within 15 minutes. Even without treatment, you’ll be recovered in 30 minutes to 45 minutes, he said.

Tear gas, on the other hand, is more commonly used by police to disperse crowds, usually outdoors. It is a humanmade chemical that “reacts with sensory nerve receptors” to hurt the skin, eyes and mucous membranes, and while its effects might be gone as quickly as with a burst of pepper spray – 30 minutes – they might also last a few hours, Warnick said. Unlike pepper spray, tear gas is insoluble in water and only partially soluble in ethyl alcohol, making it harder to rinse away the effects.

It’s the very fact that pepper spray and tear gas have different uses that makes the police department’s statements confusing to Brian Conley, a former Inman Square resident who is co-founder of the globe-trotting Small World News. Though he was most recently witness to protests in Portland, Oregon, he’s been in the middle of clashes with law enforcement in Miami, New York and Washington, D.C., as well as in Oaxaca, Mexico, and Canada’s Quebec City in 2001, where “just walking outside of the media center I had to be treated for tear gas, because it was so thick in the air.”

Consulted about the commissioner’s comments, Conley was amused. “It’s a totally different case. Pepper spray should be used at most for detention submission of a violent arrestee or somebody who police worry will become violent, whereas tear gas is for dispersal of a mob,” he said. “Pepper spray, I mean it’s like a water gun, right? You can target it or you can spray it in an indiscriminate manner, sort of in a sweeping motion – whereas tear gas by its nature is an indiscriminate tool.” (Warnick agreed that pepper’s spray’s purpose was to temporarily distract or stop someone long enough to handcuff them.)

Conley had not experienced instances where police first used tear gas for dispersal, then applied pepper spray to individuals in a crowd, he said.

Pepper spray, on the streets

The effects of pepper spray may also be different in the the real world. Conley recalled “terrible” effects of being sprayed, such as in Oaxaca in 2006, but it was rinsed off immediately and he was fine some 15 to 20 minutes later. This summer in Portland, he was sprayed without immediately knowing it and “12 hours later, I was still burning.” But he was aware that police have been experimenting with mixing pepper spray and the compound 2-chlorobenzalmalononitrile, a component of tear gas, and said it may have been that he was hit with.

Even without the use of a more potent mixture, people on the wrong end of a pepper spray blast may find themselves suffering more than the official descriptions would suggest. The one-second burst described by Warnick isn’t always how police apply OC.

“We’ve all seen the videos,” Conley said, alluding to citizen video from around the country showing police officers sending sustained bursts of pepper spray directly into the faces of even nonviolent protesters or people who have already been detained and have no way to rinse the spray away with water.

“I don’t know how you could expect police officers who are trained to use their weapons to shoot center mass, and shoot to kill if you have to take up a weapon, and then train them that ‘When you use this weapon, do this other thing,’ when the weapon is held and operated almost the same way,” Conley said. 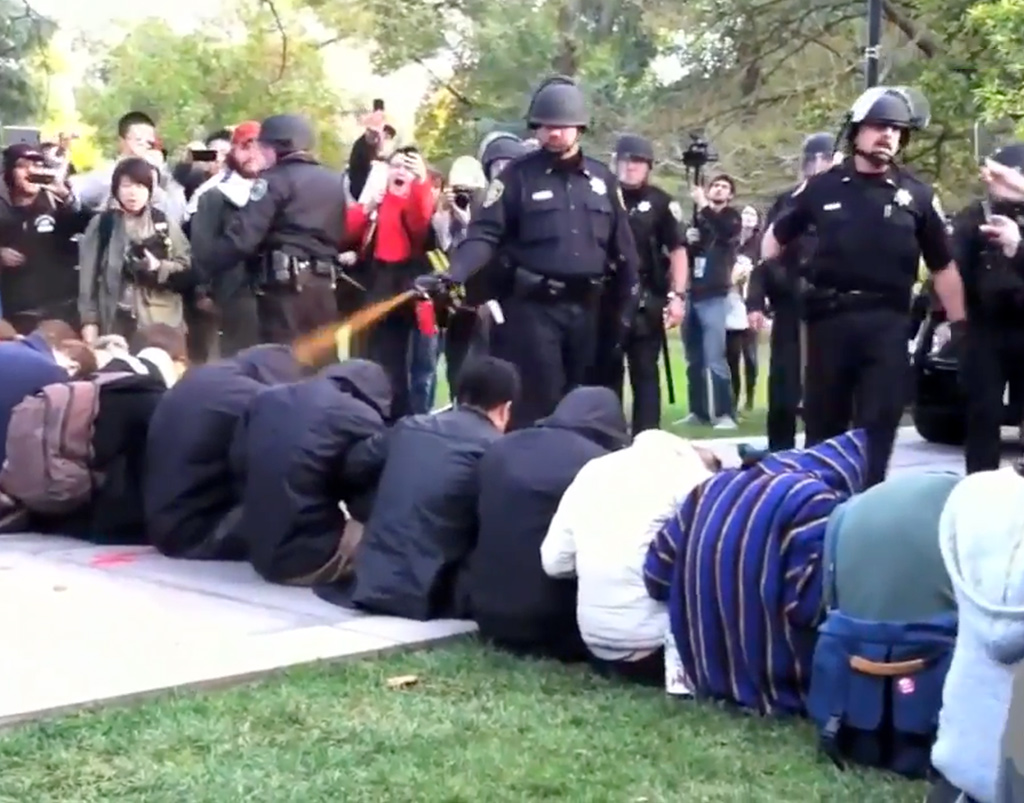 In one of the most iconic images of pepper spray use, an officer wields it against Occupy protesters at the University of California, Davis, in 2011. This approach violates Cambridge training, a local police official says.

Pepper spray, in the academy

But that’s exactly what Cambridge does, Warnick said.

Every officer going through the city’s police academy is sprayed “to personally experience a discharge” and learn how to manage if they get hit with it on the street, Warnick said. They’re also trained to spray from 4 to 6 feet away, and for one second or less, directly in the face, following guidance from a body called the Municipal Police Training Committee. “The concentration of the pepper extract typically varies from 5 percent to 15 percent,” Warnick said,  and it “can be less effective if too much OC is sprayed.”

There was a final thing about Bard’s statement that Conley could comment on from the protester side of things: The suggestion that pepper spray was better for being “from naturally occurring materials.”

“It may be made of capsaicin, but the concentration of capsaicin does not exist in the natural world,” Conley said. “And so certainly the the impact on on humans is much worse than just ‘Well, it’s like hot sauce.’ The idea that the implication is ‘Oh, because it’s natural’? Overabundance of natural things causes cancer.”