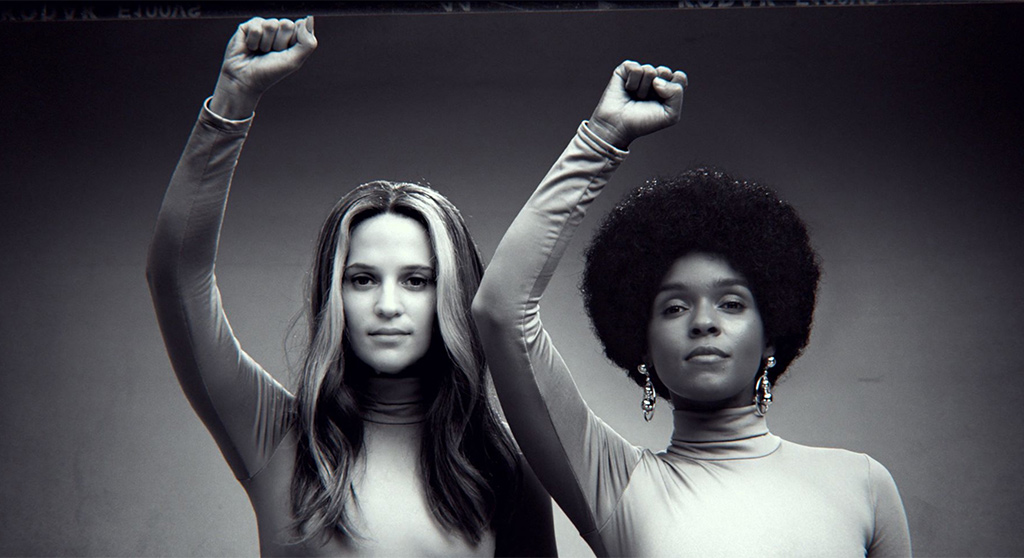 A total meandering mess of a movie with killer talent and admirable intent, but even these gifts can’t push it over the top. The loving rewind of feminist icon Gloria Steinem’s long career and notoriety is told in four iterations of Steinem – “The Glorias,” if you will – from child (Ryan Kiera Armstrong), teen (Lulu Wilson), young woman (Alicia Vikander) and middle-aged woman (Julianne Moore). Moore (“Don Jon,” “Magnolia”) gets Steinem’s biggest moments, including the 1977 National Women’s Conference and the first issue of Ms. Magazine. Vikander, so good in Alex Garland’s “Ex Machina” (2014), gets journalist Steinem’s gig as a Playboy bunny. Along the way, The Glorias partner with powerful women of color (Janelle Monáe as Dorothy Pitman Hughes and Lorraine Toussaint as Flo Kennedy), and there’s some neat cinematic flourishes added by director Julie Taymor (“Frida,” “Across the Universe”). But overall it’s a bland biopic that parboils down the legend.

Richard Wright stars as the protagonist in this cinematic adaptation of his own envelope-pushing 1940 novel about a black man who accidentally kills a white woman and tries to cover it up. That protagonist, Bigger Thomas, lives in the slums of Chicago – described in voiceover as “a prison without bars” – but lands a job as a chauffeur with a wealthy white family whose liberal waxing about elevating people of color echoes a bit of our 02138 in 2020. The film, directed by Pierre Chenal, while radical, lacks nuance, and oddly yet intriguingly edges into noir territory late in the game. Bigger’s violent tendencies are hard to get around, but his roots as the son of a man willfully lynched in the South underscores the effects of systematic racism. The film was censored often during its initial release, but plays unabridged in a new restoration as part of the Brattle Theatre’s Virtual Screening Room.

Like most fests this year, the 2020 version of the Boston Women’s Film Festival will be a virtual affair, running from Thursday through Oct. 18. Highlights include opening night’s “Antigone,” director Sophie Deraspe’s modernist spin on the classic Greek tragedy as it plays out on social media; “The In-Between,” a buddy comedy that has two women with demanding medical issues cruising through the American Midwest; and “Nina Wu,” Midi Z’s psycho-thriller about a Taiwanese actress (Wu Kexi) on the cusp of stardom who begins to confuse reality and the narrative she’s involved in, with the specter of #MeToo in the frame as well. Films are available for viewing throughout the fest’s entirety. Go to the BWFF’s website for tickets and more info.

A scathing yet comical take on the big business of football. The film, directed by Ted Kotcheff (“Wake in Fright,” “First Blood”) is based in Peter Gent’s 1973 book, a fictionalized look inside the Dallas Cowboys organization, where he spent four years as a wide receiver. NickNolte tackles the Gent-esque role with his signature growling gruffness, while Mac Davis plays the team’s charismatic quarterback, imbued with the composure and affable presence of a veteran Joe Montana. This was the big-screen debut for Davis, a popular country singer. His acting career never really took off after this winner, and he made just a handful of other films (“The Sting II”). Davis passed away last week.

William Friedkin, who directed the 1970 version of the recently remade “Boys in the Band,” made this thriller about a serial killer working the gay underground S&M clubs of New York City. Al Pacino plays Steve Burns, a straight cop who goes undercover as a clubgoing regular to catch the killer. The depictions of rough play promiscuity were pretty edgy at the time of its release, but the film misses opportunities to more fully explore gay culture or the bias behind gay bashing – it’s a straight-up thriller, and it works in that regard and as just a peek into another world.

Sofia Coppola’s sophomore effort is a haunting portrait of ennui and detachment abroad. The pairing of Bill Murray’s avuncular actor doing a turn as a Japanese scotch pitchman with Scarlett Johansson’s young newlywed having second thoughts is lightning in a bottle. The two souls are adrift in same sterile Tokyo hotel and bump up against each other in droll, laconic conversation. Their relationship feels eerily akin to Coppola’s recent “On the Rocks,” which pairs Murray with Rashida Jones, though that father-daughter caper isn’t as emotionally deep – not even close. Murray, playing an extension of himself, fills the role with ease, and Johansson is right in step with him.

Guy Moshe’s film touches on so much facing us now and in the near future: The sun is so toxic and harsh you can’t go outside, hardly anyone has real sex – virtual sex is better – and you can just clone your kids. Feeling sick? Going to die? Dial up a clone. But Adam Bird (James D’Arcy), whose wife has it in for him, whose company is about to go under and has a bad ticker, wants to remain naturally born Adam. He’s about the only guy in the city who goes out during the day, driving a convertible to the office in a hazmat suit, and the lone participant in a conference room where he attends virtual meetings with cloned board members (sounds familiar, right?). Provocative in the issues it floats, but D’Arcy’s Bird is no Joseph K.; he’s more of a blustering Karen.

Joseph Gordon-Levitt’s directorial debut is blessed with a tremendous female ensemble (Brie Larson, Julianne Moore and Scarlett Johansson) that lifts it higher than its thin rom-com premise. Gordon-Levitt also stars as the titular Jon, a lady killer with six-pack abs who can land any woman he’d like. But all is not champagne and 10s: He’s a working-class Jersey boy moving sideways sans ambition, and has a chronic porn/masturbation habit to boot. Johansson plays the woman who catches his eye and won’t give it up until he starts going to night school and she gets to meet the parents (Tony Danza and Glenne Headly). Moore adds depth to the manboy-becoming-a-man saga as a troubled woman in his night class. (Read the full review from Sept. 26, 2013.)

Sofia Coppola’s directorial debut is a dark, gauzy adaptation of Jeffrey Eugenides’ novel about five sisters with dogged male suitors. Early on you realize there’s something oddly off with the Lisbon sisters (Kirsten Dunst as Lux, the most perfect of the perfect Lisbon girls), all of whom seem disaffected, aloof and perhaps depressed. A bit more time with mom and pop (Kathleen Turner and James Woods), and the sense of something emotionally unhealthy or even mental illness is in the air. The laconic style of the film purposefully and poetically echoes the emotionally troubled tide that grips the sisters.

Kirsten Johnson’s documentary is a staged fantasy/farce about her father, who is in the early stages of memory loss after Alzheimer’s painfully took her mother a few years back. The film’s a love letter, a means of coping and an opportunity for some good father-daughter bonding. Dick gets to try out a coffin; in another scene, an air conditioner falls out a window and takes Dick out. It looks wildly real, but Kirsten Johnson, the creative force behind 2016’s “Cameraperson,” has a lot of friends in the stunt business who collaborate on ways to stage Dick’s death. He’s a game go, too, and there are the rewinds back to mom. As a person who has been down this road before with loved ones, not enough people fully understand the evils of this disease. “Dick Johnson” is a riveting illumination of it, and for those who have been there, the film will be bittersweet emotional turbulence – but there will be laughs too.