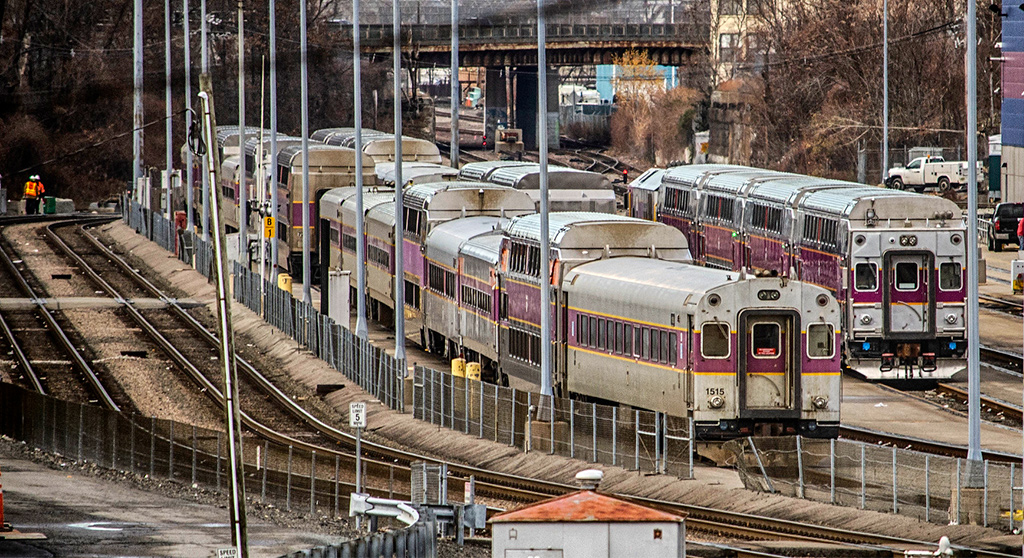 Noise from an MBTA commuter rail facility in Somerville has been unbearable over the past two months, some East Cambridge residents say. (Photo: Paul Jarvie via Flickr)

Residents in East Cambridge have reported disturbing noise and vibrations over the past two months that recall an issue with a nearby MBTA commuter rail facility more than two decades ago. The topic came up again at a Wednesday virtual meeting of the East Cambridge Planning Team.

Described as a “whirring sound; it’s low and it’s vibratory,” the sound is not blocked well by earplugs and has caused lost sleep and a bit of sanity, residents said during the ECPT meeting. Some say they’ve tried moving their beds to the middle of rooms and adding padding to reduce the vibrations.

In 1999, East Cantabrigians also complained of a loud sound that seemed to be emanating from the commuter rail maintenance facility in the Inner Belt area of Somerville. Monsignor O’Brien Highway divides this area and East Cambridge, with North Point between. On the Somerville side is mostly industry and businesses, from a UPS Customer Center to a Casella Waste Systems facility and Bunker Hill Community College.

A study commissioned at the time found that trains idling in the maintenance facility could generate noise 6 decibels above the background. (Experts at the time said sounds above 5 decibels are “clearly noticeable.”)

Residents could hear the largest impact from trains idling at “high,” while trains idling on the “low” setting were not perceivable, the report found. After being presented with the findings, the MBTA issued a memo to operators at the facility to keep trains in low idle until a train’s crew was on board and ready to depart.

The return of the loud, disruptive sounds caught the attention of the City Council in a meeting Monday. “There is new noise from this facility that had been dealt with many years ago. Suddenly, it’s cropped up again as an issue,” councillor Quinton Zondervan said. “Obviously, we support sustainable transit and we want to make sure it is not disruptive to the community as well.”

State Rep. Mike Connolly is leading the charge to figure out the recurring problem. Connolly organized a Feb. 26 meeting with the MBTA and its contractor Keolis – whose leadership was skeptical that the sound was a return of the sound from 1999 because the type of train used in 1999 was no longer in service, Connolly said.

Connolly pushed back, even documenting a midnight walk to the area where he observed the noise that seemed to be coming from the rail facility, matching residents’ description.

Residents say the 1999 memo establishing limits on idling trains is no longer being adhered to. ”We cannot tolerate continued sonic assaults on our neighborhood that are completely in your control and avoidable,” the team said to transit officials in a letter.

At the ECPT meeting, Connolly said transit officials committed to a new sound study to investigate the complaints, but it is unclear when residents would hear back.