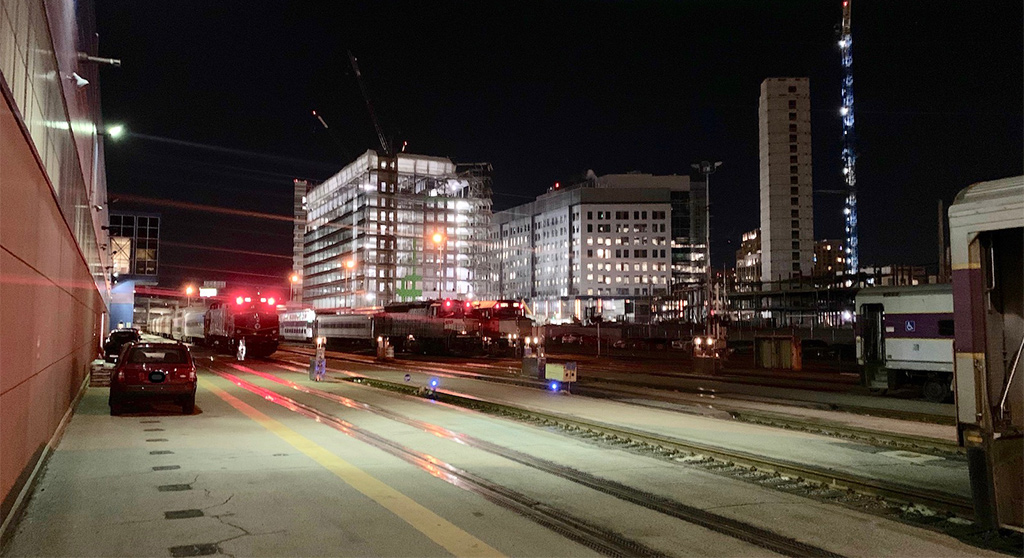 A view from inside a Somerville MBTA rail yard identified as the source of recent noise disturbing East Canbridge residents, with Cambridge Crossing buildings in the background. (Photo: State Rep. Mike Connolly)

An amendment to study the noise impacts in East Cambridge from a commuter rail maintenance facility and Grand Junction Railroad passed Thursday in the House, the first hurdle on its way to the governor.

The earmark proposes spending at least $30,000 to do a comprehensive study of the sound impact of the rail facilities in East Cambridge and Somerville on residents. The amendment was sponsored by state Reps. Mike Connolly and Steven Owens – a direct response to noise and vibration complaints from East Cambridge residents over the past four months.

For many residents, the noise seemingly emanating from the Massachusetts Bay Transportation Authority commuter rail facility in the Inner Belt area of Somerville is reminiscent of noises they suffered in 1999. After those complaints, the MBTA adopted procedures to reduce the noise impact at the facility on residents.

Connolly has led the charge in getting the the transit agency to respond, though with mixed results. “They tell me they have double checked, and that nothing has changed with the operations or procedures of the maintenance facility. And yet, over the past few months, we’ve seen a major increase in noise complaints from East Cambridge residents,” Connolly said in a statement.

At the behest of Connolly and state Sen. Sal DiDomenico, the MBTA conducted noise monitoring between March 8-12 that did not show any discernible noise disturbances. Connolly and Cambridge officials question the quality of the data. “It wasn’t clear what locations were used to collect the data, what activity was ongoing in the rail yard at the time of the data collection, what the weather conditions were at the time of collection or what methodologies were used to perform the collections,” Connolly said.

Connolly and proponents of the budget amendment want state funds used for professional sound monitoring, modeling on how new buildings at Cambridge Crossing might be creating echos in the area and draft recommendations on how to reduce the impact of commuter rail facility noise on surrounding communities.

The addition of the amendment to the proposed 2022 budget does not guarantee it will become law, because the budget still needs to go through the state Senate and the governor before being signed into law this summer.

Still, proponents of the study are hopeful it will bring relief. Anecdotally, residents report improvement since the MBTA’s sound monitoring, though many worry it’s temporary. “We all still see it as being in their control,” East Cambridge resident Helen Kobek said.

In the meantime, the MBTA agreed to work with Connolly in scheduling a meeting in the coming weeks to discuss the issue with East Cambridge residents.