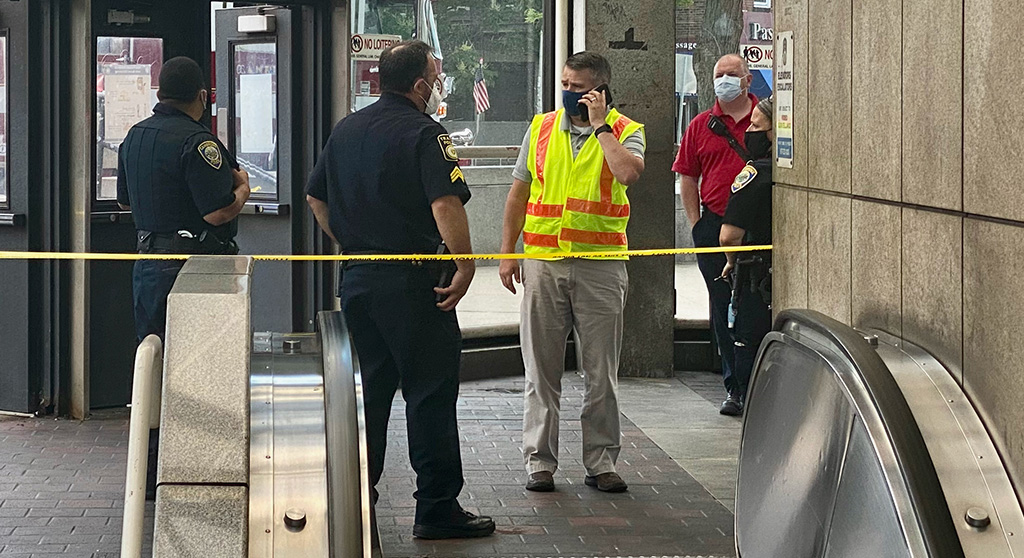 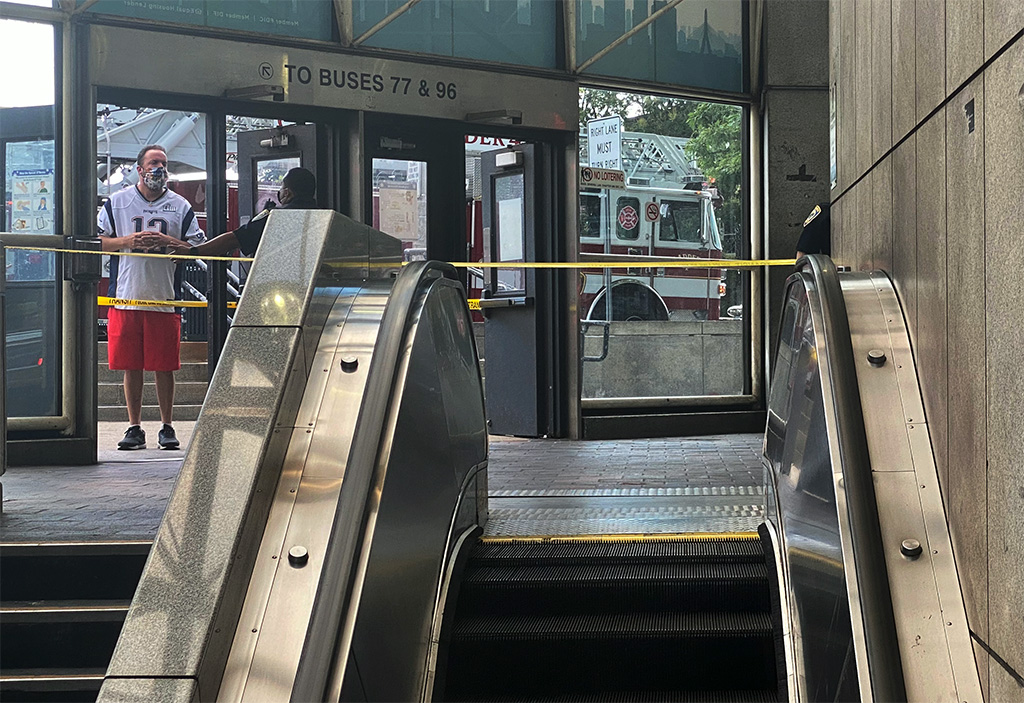 A rider is sent away by transit police June 26, 2020, after a death at Porter Station. (Photo: Marc Levy)

The MBTA Transit Police pays $178,190 annually to Supt. Richard Sullivan to serve as a media representative who does not take questions from the media, even as people keep dying on MBTA property.

Notably, after two deaths on Cambridge and Somerville rail tracks in the summer of 2020, Sullivan – identified by officers on the scene as the only person authorized to talk about the incidents – emailed in response to questions: “Please follow us on Twitter.”

Attempts to reach Sullivan after that response were unsuccessful, as transit police and dispatchers would not provide a phone number. When asked to identify Sullivan’s superior, transit police said June 26, 2020, that he didn’t have one – that Sullivan ran the agency. That was false, as it is MBTA chief of police Kenneth Green who runs the force and has oversight of Sullivan.

The distinction makes little difference: It was okay that his agency’s public information officer didn’t do his job by engaging with the public because it was “easier” for Sullivan to post an occasional paragraph online instead of “getting multiple calls” from the media, said Green, whose own taxpayer-funded annual salary is $195,500.

A call to complain to the MBTA Transit Police professional standards units in early July 2020 was answered by detective Matthew Haney. His response during a 25-minute call after being given extensive information about the problem was: “I can take on your number and pass it along to [Sullivan].” When reminded that Sullivan was the cause of the complaint and had a superior in the chief of police, Haney said, “So you would have to reach the chief.” When asked why the professional standards unit would turn complaints about a police superintendent and chief back to the same police superintendent and chief who were being complained about, Haney said his role in the two-person unit was only to do background checks on officers being hired. But there was a complaint form available, he said.

In a series of phone calls and emails in 2020, it was found that the offices of top executives at the state Department of Transportation were similarly uninterested in a well-paid police official whose job it is to handle the media doing that job to avoid “getting multiple calls” from the media.

Court cases present the Transit Police as a notoriously lazy agency: In April, a federal judge dismissed a former transit lieutenant’s wrongful-termination suit with a finding that he had been leaving his desk as shift supervisor to sleep on a cot in what was referred to as the “Night Lieutenant’s Room,” Universal Hub reported. Another former transit lieutenant, Christopher Maynard, was dismissed under ultimately unsubstantiated charges of making fake overtime requests.

Judge Patti Saris acknowledged that Sullivan “may have been angry that an officer posted a photo of him asleep,” though the judge didn’t think it played a role in Maynard’s dismissal, according to Universal Hub’s Adam Gaffin.

Sullivan’s approach to handling media questions by not answering them continued into this summer, as one man committed suicide by jumping from an MBTA parking garage in Salem on Aug. 3, followed by a second man dying by suicide in a fall from the Alewife T station parking garage Aug. 7. Cambridge police deferred questions about the death to transit police; Sullivan was emailed questions and gave no response.

Yet the 2020 injunction to “Please follow us on Twitter” was no help either, as neither incident was addressed there. In fact, instead of a note that the transit system had seen its second suicide in a week, and of a Cambridge resident and municipal employee, the only tweet Aug. 7 was a department example of “Saturday Humor” in which someone – presumably Sullivan – told two jokes:

“Bonus: Did you hear about the woman who invented Knock Knock jokes?? She won the ‘No-Bell’ prize!!!”

The Twitter account links to the transit police department’s news blog, which also shows no information about the recent deaths. Surprisingly, Sullivan answered questions about a suicide just the Saturday before, telling the Lowell Sun that a man seemed to step intentionally into the path of a commuter rail train in that city and was pronounced dead at the scene. That made for at least three deaths within two weeks.

Rules are a mystery

Sullivan also declined to release additional information in the Lowell incident, though, and information was similarly scant about another man killed March 11 by a train in Revere in which “foul play is not suspected.”

In general, transit police rules around media are a mystery, with some deaths warranting a couple paragraphs of explanation and others not. But Sullivan almost never takes questions.

The Massachusetts Bay Transit Authority made an effort in 2017 to decrease deaths of trespassers on train tracks, which are often suicides. Some two dozen people died on tracks that year – commuter rail tracks were a focus – representing a doubling of such deaths from 2016. Sullivan’s approach to questions from the media makes it nearly impossible to put the current run of MBTA deaths in any kind of context, though, or to determine whether the agency is making efforts to prevent the deaths as it did five years ago, or whether those efforts were considered successful and sustained.

Exception to the rule

There was a single time recently in which Sullivan made a distinct effort to communicate with media and even released a colorful, quotable comment: A Cambridge incident Aug. 28 in which transit police said a man had “terrorized and attempted to assault” an MBTA bus driver. A video released by Sullivan showed the man stepping in front of the bus at Mount Auburn Street and Coolidge Hill Road in West Cambridge, pulling on the bus’ bike rack, blocking the lane with a car, walking toward the side of the bus and pulling on the door “as if trying to get aboard,” WCVB-TV reported.

Though that may seem less than terrifying and no one was hurt in the incident, Sullivan spoke with unique passion on the issue.

“MBTA employees perform an invaluable public service and should never be subjected to this abhorrent conduct,” Sullivan told the channel. “The transit police will always exhaust every investigative tool and resource to hold [accountable] those who assault our employees while in the performance of their duties.”

Sullivan and MBTA spokespeople were emailed Tuesday and offered a chance to explain his job and approach to handling news and media queries. On Wednesday, Sullivan chose to answer specifically about the Aug. 7 death – saying 10 days after he was contacted for information that questions should be directed to the Middlesex District Attorney’s Office.

He further suggested Wednesday via email that his failure to respond to questions about the Alewife incident was based on a policy about respecting the privacy of the dead – though one that it took him 11 days to acknowledge, ignores the breadth of questions that remain around a spate of transit property deaths and fails to address the inconsistency of his agency’s approach. The response also suggested that his refusal to answer questions did not affect “the multitude of media outlets in Massachusetts.” (In fact, a common theme in news stories involving transit police is of Sullivan declining to take questions.)

In other matters, he said, “please feel free to contact me. I will strive to answer your inquiries in a more expeditious manner.”

But Sullivan, of the $178,190 annual salary, didn’t just defer all questions involving deaths to Middlesex County; he also directed queries to Joe Pesaturo, director of communications for the entire MBTA, if Sullivan’s own approach to answering wasn’t to a media outlet’s “liking.”