‘The Card Counter’: Poker player has a history, and maybe an appointment to settle old scores 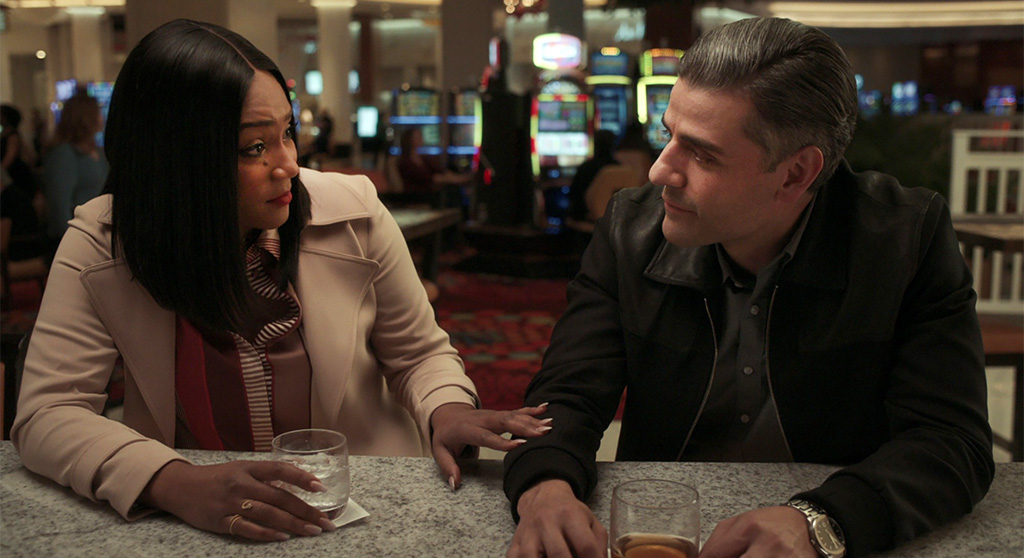 ‘The Card Counter’: Poker player has a history, and maybe an appointment to settle old scores

Film critic turned screenwriter turned director Paul Schrader has long been busy at the task of plumbing the tumult of men at war with themselves and the rest of the world. Take Travis Bickle in “Taxi Driver” (Schrader penned this 1976 Martin Scorsese classic) or Willem Dafoe’s Jesus in “The Last Temptation of Christ” (1988, another Scorsese collaboration), let alone Schrader’s last critically hailed directorial effort, “First Reformed” (2018), in which Ethan Hawke plays a priest struggling with his faith, sobriety and place in the world. “The Card Counter” is more of the same, and probably most akin to the filmmaker’s unheralded 1992 effort, “Light Sleeper.” The big ante here is the casting of Oscar Isaac (“Ex Machina,” “Inside Llewyn Davis”) as a troubled gambler who goes by the curious pseudonym of William Tell, and Tiffany Haddish as La Linda, something of a muse of the championship poker circuit who matches players with silent backers interested in a cut of the action (50 percent, to be exact).

That’s the deal, but what’s going on under those cards is something more nuanced and darker. We learn early on that Tell has spent almost 10 years in prison. Just what for isn’t readily clear, but we know he used that time to garner the skills of the film’s title. Out of lockup, Tell works casinos methodically, moving about regularly and being careful to take modest winnings and remain under the radar – until he runs into La Linda, who recognizes his talent for what it is. It’s also at one of these random East Coast casinos that Tell wanders into a police and security convention where a lecture is being given by one Maj. John Gordo (Dafoe) on the latest in security technology. It’s there too that a young man named Cirk (Kirk with a “C,” played by Tye Sheridan, best known for his gamer in “Ready Player One”) approaches Tell, slipping him a piece of paper and telling him he knows who he is and that they need to talk. Not to give too much away, but it turns out Cirk’s father, Gordo and Tell were torturers (er, experts in enhanced interrogation techniques) at Abu Ghraib. Gordo, a private contractor who led the operation, could not be prosecuted for crimes on foreign soil; Tell and Cirk’s dad, enlisted men captured posing with the tortured on camera, were not so lucky.

Like the aforementioned Schrader masterworks, “Card Counter” ultimately becomes about redemption, atonement and a sense of justice that’s not congruent with what laws and courts would impose – something Schrader made so indelible with “Taxi Driver.” “Counter” is also loaded with metaphors and a foreboding aural moodiness by Robert Levon Been that becomes the haunting externalization of Tell’s inner turmoil. (Been is frontman for Black Rebel Motorcycle Club; his late father, Michael, lead singer of The Call, scored “Light Sleeper.”) Isaac, with his long face, brings an intense heaviness to the part. His Tell is a loner, a man in between who’s not interested in saving himself but in righting the wrongs of the past. La Linda, Cirk and Gordo give him those opportunities in different ways, some willingly, some not. Tell takes Cirk under his wing for that East Coast tour staked by La Linda, who drops in from time to time to check on her “horse.” There’s a deep, instant chemistry between La Linda and Tell, one Schrader smartly pulls back on, turning it into a slow burn with palpable yen and connections that go places in the other’s soul that haven’t been stirred in years. The relationship with Cirk, while effective, often feels like too much of a plot point insert for Tell’s subsequent actions. It’s a minor flaw in an otherwise riveting character study, a retooling of Schrader’s seminal motif made wholly new again.