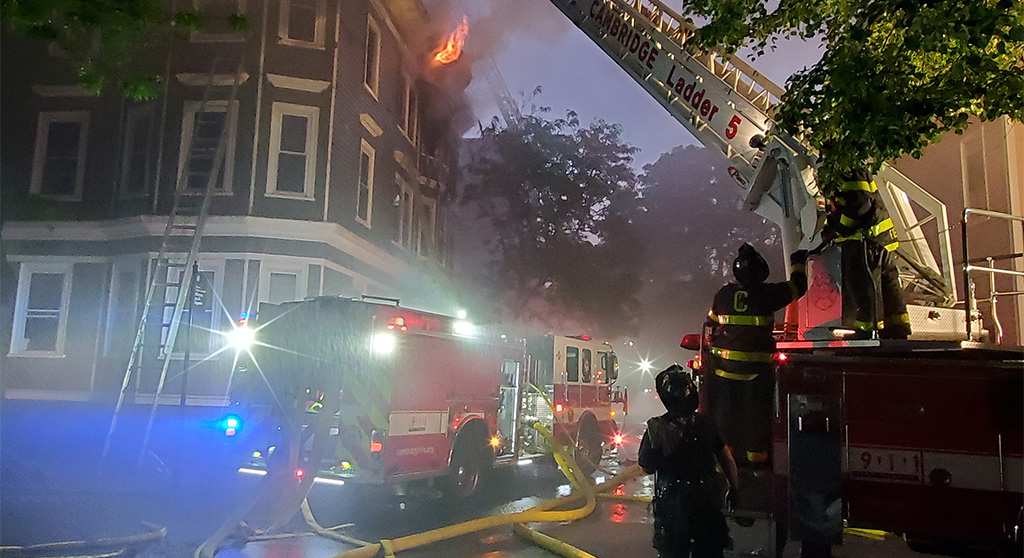 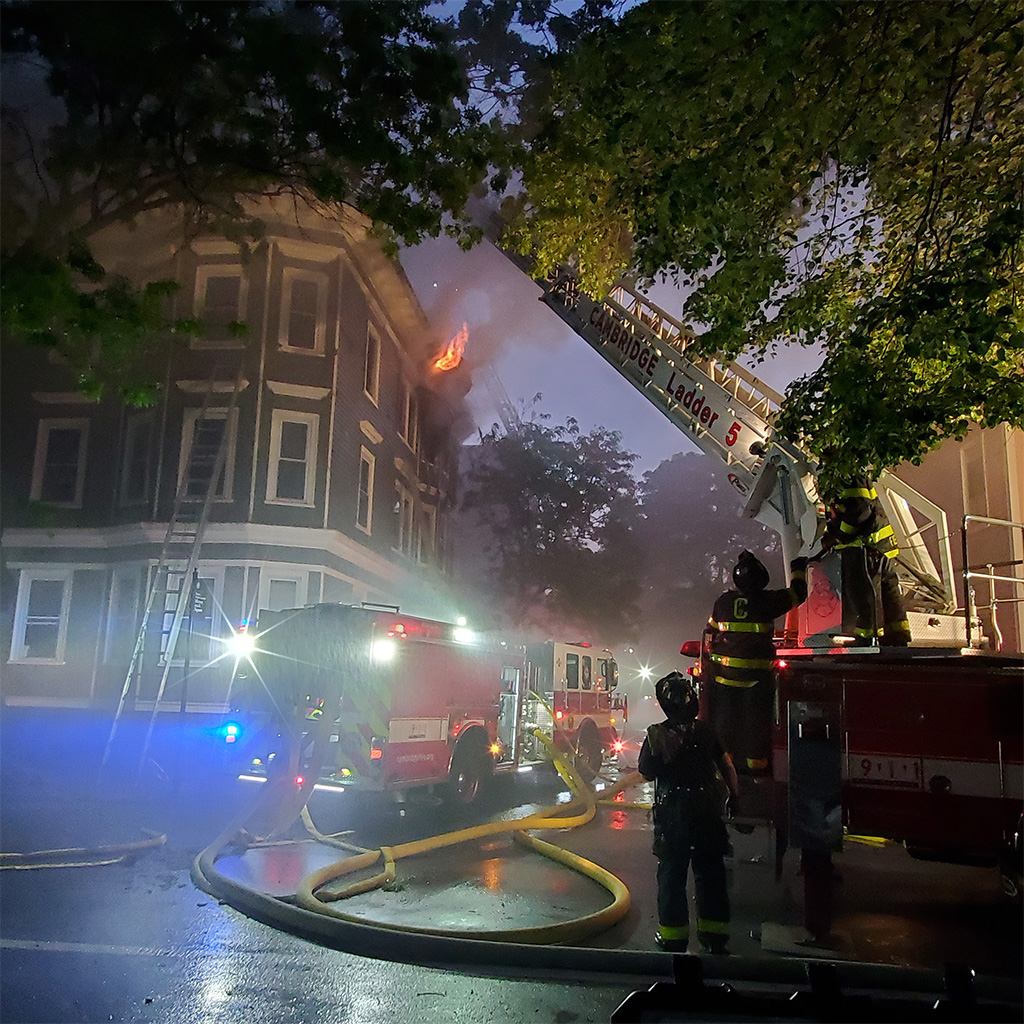 A May 31, 2020, fire destroys an apartment building at 213 Harvard St., Mid-Cambridge. A plan to replace it is on meeting agendas this week. (Photo: Cambridge Fire Department via Twitter)

City Council inauguration, 10 a.m. Monday. The public is allowed to attend but discouraged from crowding this start-of-the-term ceremony, which swears in councillors and lets them begin choosing a mayor and vice mayor from within their ranks. As the longest-serving member of the council, E. Denise Simmons is in charge until Mayor Sumbul Siddiqui is either reelected or replaced. This event was moved from City Hall to Starlight Square, 84 Bishop Allen Drive, Central Square. Televised and watchable by Zoom video conferencing.

School Committee inauguration, 6 p.m. Monday. As with the council’s first meeting of the term, committee members will be sworn in and hold an “organizational meeting” to elect a vice chair, who leads in the absence of the mayor; appoint subcommittees and their own chairs; and adopt rules of procedure. Until a mayor is elected, senior city councillor E. Denise Simmons sits in. Also as with council inauguration, the public is allowed to attend but discouraged from crowding – and unlike Starlight Square, Sullivan Chamber is an enclosed space. The committee meets temporarily at City Hall, 795 Massachusetts Ave., Central Square.

Getting to work on education

School Committee, 6 p.m. Tuesday. Aside from a presentation by interim superintendent Victoria Greer and rote contract and grant awards, there’s not much on this agenda – but as the first business of the year it’s of interest for clues to the rest of the term, now including first-time member Akriti Bhambi. The committee meets in the Dr. Henrietta S. Attles Meeting Room at Cambridge Rindge and Latin School, 459 Broadway, Mid-Cambridge. Televised and watchable by Zoom video conferencing.

Planning Board, 6:30 p.m. Tuesday. The board will appoint a chair for the new year and talk about rezoning neighborhoods that allow only single-family and two-family housing. If the previous term’s rejected “missing middle” zoning is any guide, the challenge will be figuring out how to add density without profiting only developers and welcoming in only the wealthy, raising the stratospheric costs of Cambridge real estate even further. Meanwhile, an affordable-housing mixed-use project – 107 apartments and 3,000 square feet of commercial space – is back as proposed by Just-A-Start at 52 New St., Neighborhood 9 near Fresh Pond. This is an Affordable Housing Overlay project without official oversight by the board, but Just-A-Start has heard critiques and may respond. Members may also look at a project coming before the Board of Zoning Appeal on Thursday: an eight-unit apartment building to replace one destroyed in a May 31, 2020, fire at 213 Harvard St., Mid-Cambridge. Televised and watchable by Zoom video conferencing.

Tearing down the Garage mall

Historical Commission, 6 p.m. Thursday. Members pick up hearing the case for demolition at The Garage mall in Harvard Square, which Trinity Property Management hopes to reopen at 36 John F. Kennedy St. in 2024 with expanded restaurant and entertainment space below ground; street-level shops and eateries with more access from surrounding sidewalks; and offices on five stories overhead. The structure would be razed except for two-story facades of an 1860s stable building at Mount Auburn and Dunster streets. There are also changes at the old Border Cafe to consider; it closed at 32 Church St., also in Harvard Square, after a fire in Dec. 1, 2019, and more than a year later was announced closed forever. And boutique-hotel plans and a potential landmarking are back for the circa-1912 Cambridge Gas Light Co. Building at 727 Massachusetts Ave. near Central Square. Watchable by Zoom video conferencing.

Board of Zoning Appeal, 6:30 to 11:30 p.m. Thursday. The board hears the details of an eight-unit apartment building that would replace one destroyed in a May 31, 2020, fire at 213 Harvard St., Mid-Cambridge. Watchable by Zoom video conferencing.