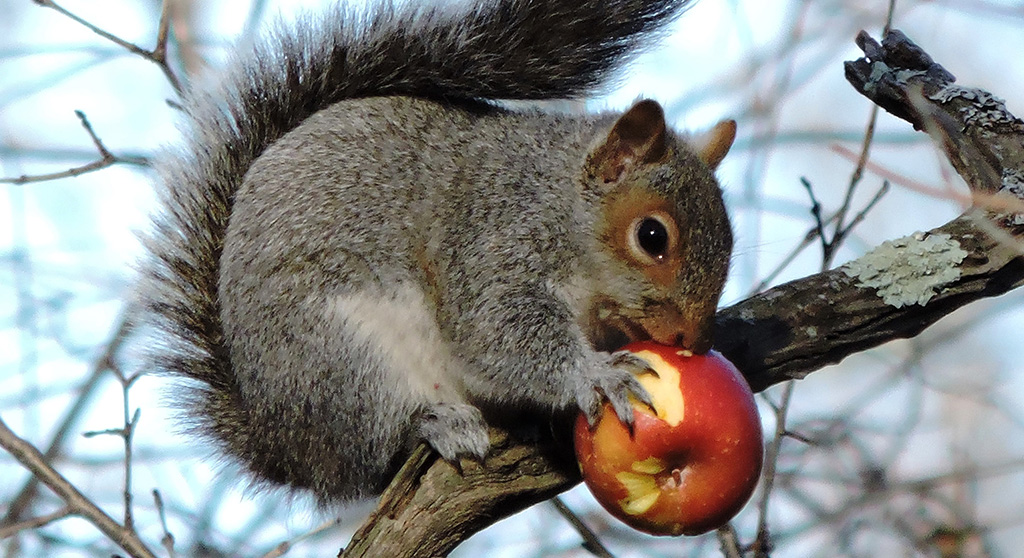 Eastern gray squirrels – whose fur is a mix of brown, black and white fur that looks gray from a distance – weigh about 1.5 pounds. This one finds a nut in Cambridge in January. (Photo: Richard George)

Eastern gray squirrels are gray – except when they aren’t. You have probably seen a black or even a white Eastern gray squirrel. Researchers believe that before Europeans roamed North America, black squirrels were common in the continent’s dark old-growth forests, where their black color hid them well from predators. Even today black is the dominant color in northern regions such as Ontario and Quebec, where scientists have found the coats also help squirrels stay warmer in cold temperatures. Black-coated squirrels have 18 percent less heat loss in temperatures below 14 degrees Fahrenheit than gray-coated squirrels, and a 20 percent lower metabolic rate. 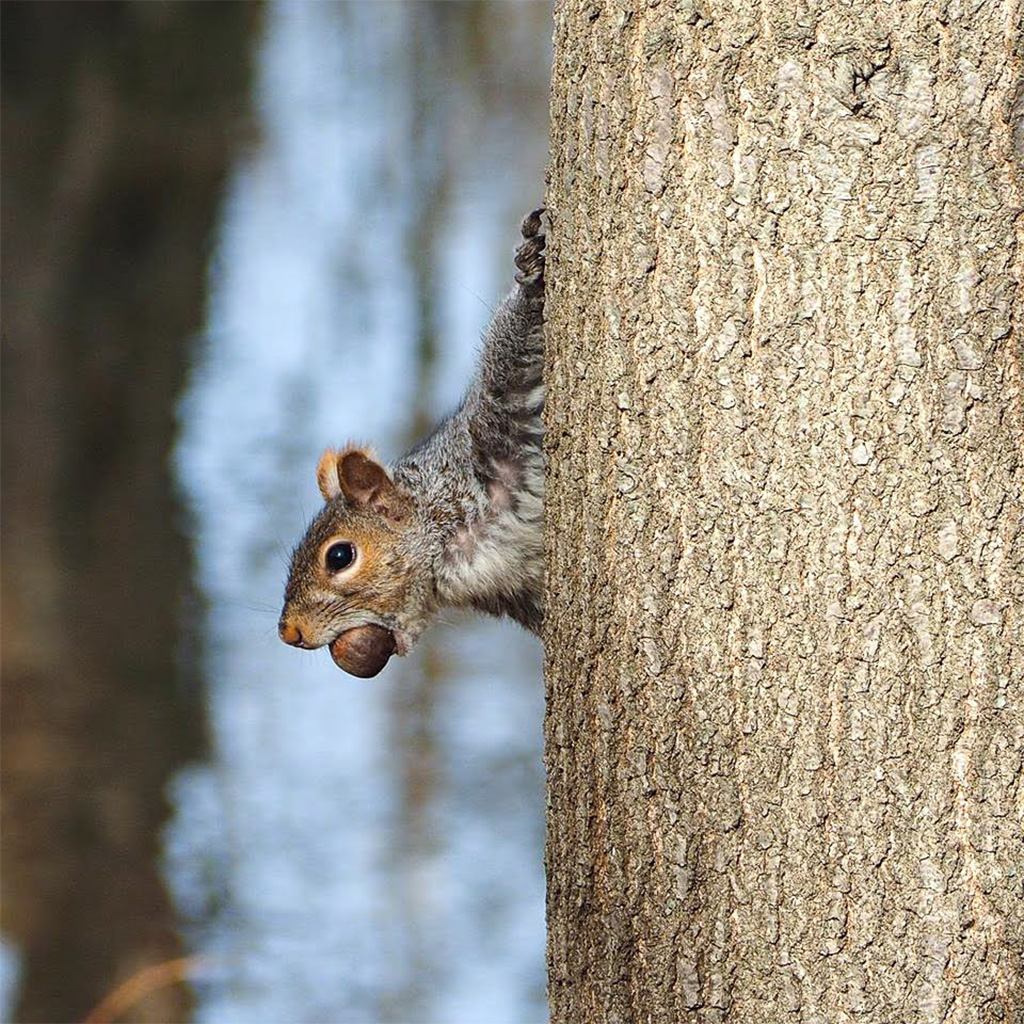 Squirrels descend trees head first. When danger threatens, they sidle around the trunk of the tree, keeping just out of sight of the predator. This behavior frustrates many a dog. (Photo: Jeanine Farley)

Some intrepid Eastern gray squirrel researchers have developed a game called Find the Squirrel! to test how quickly people can spot gray- and black-colored squirrels in different habitats. Their results showed that people have a more difficult seeing black squirrels in dark, old-growth forests (an advantage for squirrels hiding from predators), an easier time seeing them in young forests (a disadvantage), and an easier time seeing them on urban roads (an advantage). But those old-growth forests are few and far between these days; the sunnier, young forests that people encounter over most of New England offer gray squirrels the advantage.

Scientists have learned that the bit of genetic code that causes a squirrel to have black fur is a variant of a specific gene (MC1R∆24, to be exact). This gene seems to come from fox squirrels (Sciurus niger), the biggest species of squirrel in North America. Fox squirrels are usually reddish, but their fur comes in a variety of colors, including black. Scientists think that a black-colored fox squirrel bred with an Eastern gray squirrel, passing along the variant gene that causes black fur. This variant gene is similar to other genes in fox squirrels. 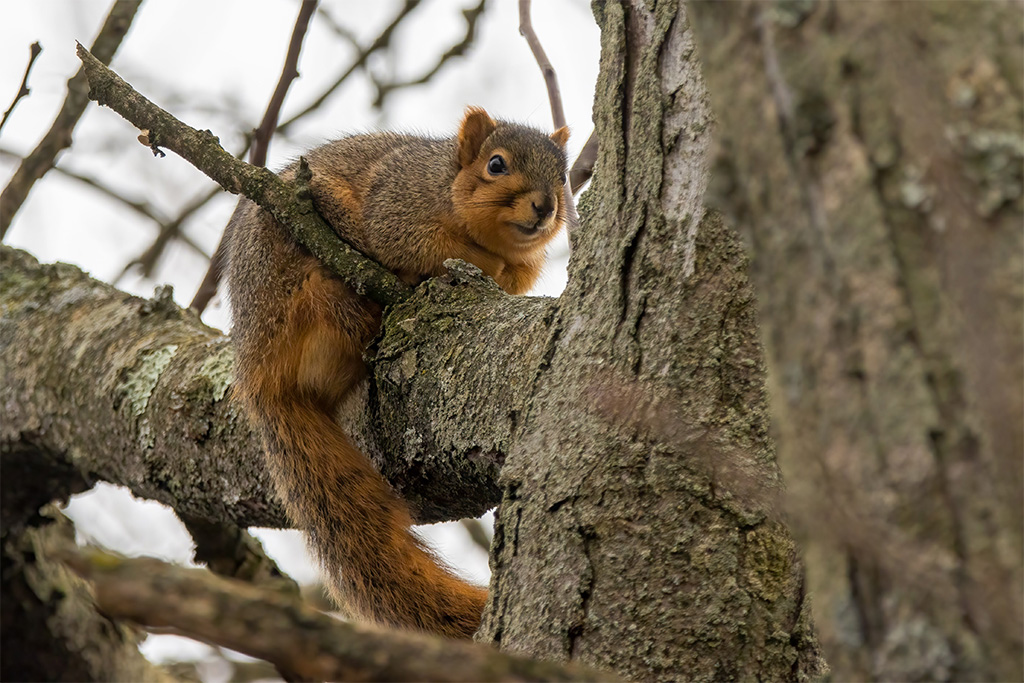 According to Mass Audubon, black squirrels have well-established populations near Springfield and in some Boston suburbs. (I used to see black squirrels in my Somerville backyard and in most of the neighboring streets and parks. I haven’t seen any in my neighborhood for a couple of years now, though.)

Eastern gray squirrels (no matter the color) breed twice per year – once in January or February and again in June or July. If you see two squirrels chasing each other through trees in those times, it is most likely a male chasing a female as part of their mating ritual. Gray squirrels are not monogamous. One male mates with several females. Baby squirrels are typically born naked and with eyes closed about a month and a half after conception. They grow hair by three weeks. By five weeks, their eyes open. By eight weeks, the young squirrels dare to leave the nest (but do not venture far). At about this time, the youngsters are weaned and begin to eat adult food. By 12 weeks, the youngsters are independent and as big as the adults. The second litter of youngsters stays with the mother over the winter before they go off on their own in the spring. 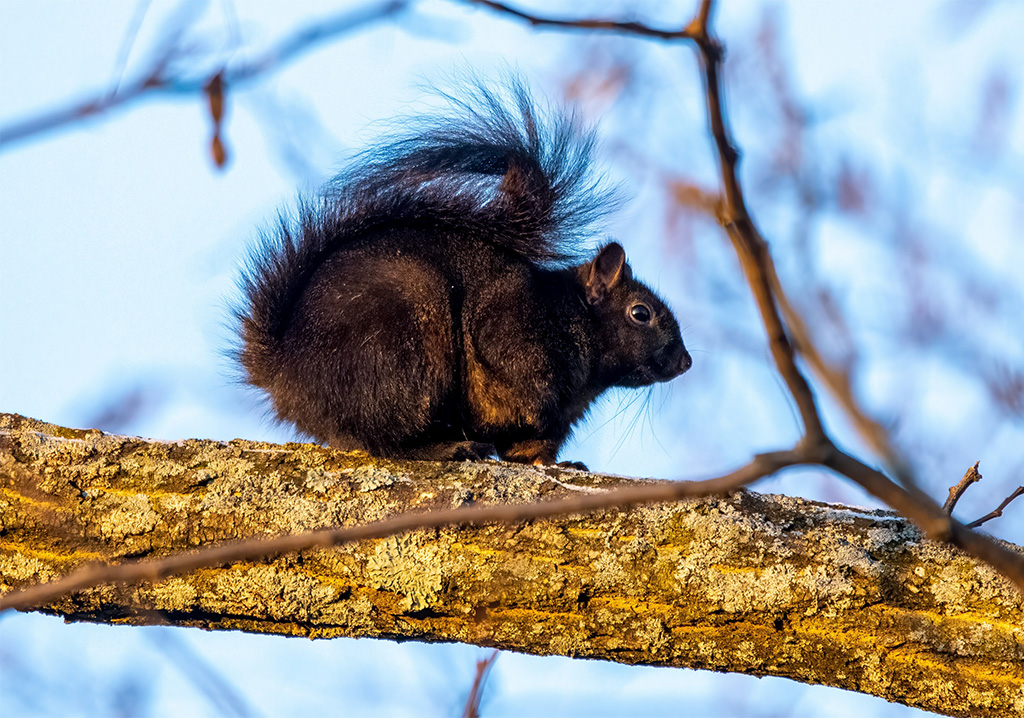 Gray squirrels use their tails for balance, as a blanket, as an umbrella, for communication, and as a rudder when swimming. This black squirrel surveys the scene in Huron Village. (Photo: Richard George) 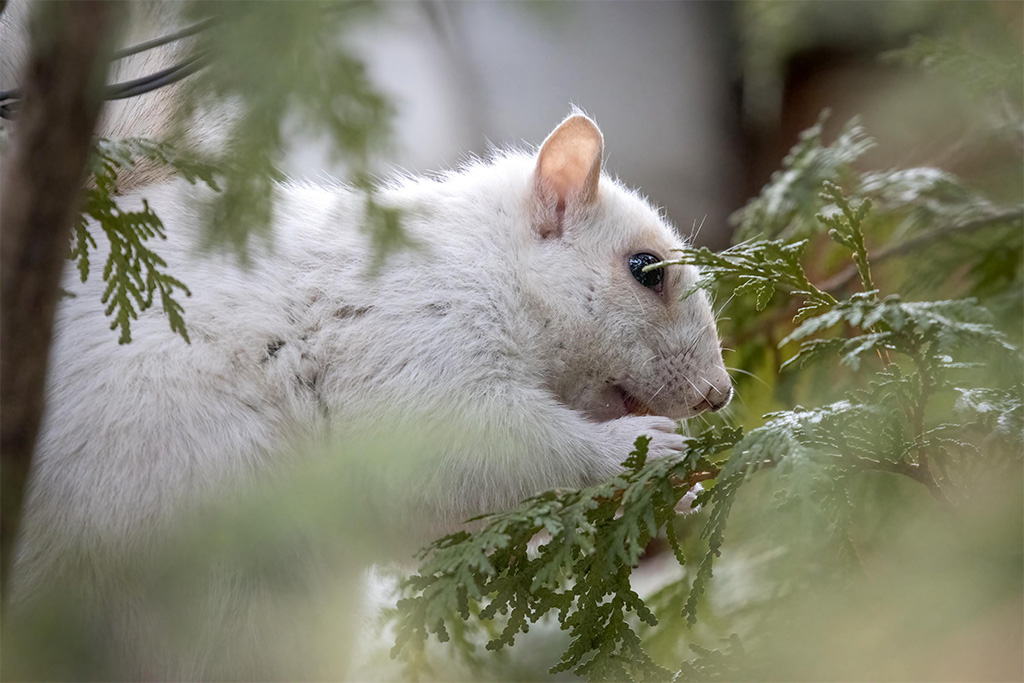 White squirrels lack pigment and are called leucistic. Because this squirrel has black eyes, it is not a true albino; true albinos have pink eyes. (Photo: Richard George)

The Eastern gray squirrel (Sciurus carolinensis) is known for its large bushy tail. In fact, the word sciurus is from the Latin skia, meaning “shadow,” and oura, meaning “tail.” In other words, a squirrel is a creature that rests in the shadow of its tail.

Each Eastern gray squirrel has its own territory, where it forages for food, builds a nest (which might look like a chaotic cluster of leaves but is really a carefully constructed skeleton of twigs lined with leaves and moss), and raises youngsters. Squirrels are a tolerant species whose territories may overlap; they can eat and forage near each other without becoming aggressive. 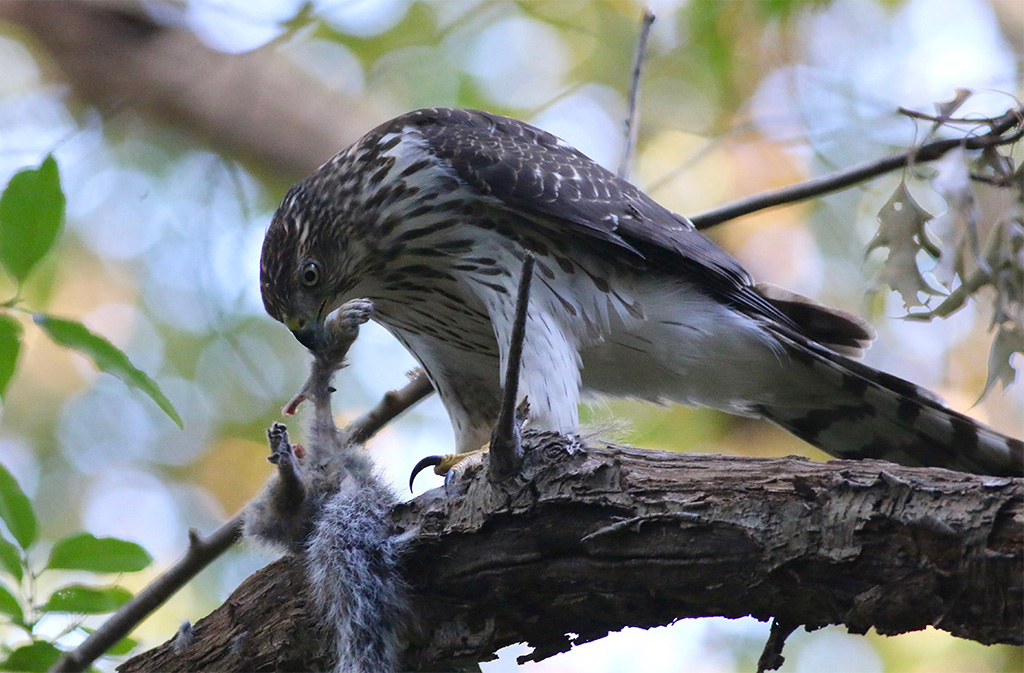 In spring, squirrels eat mostly buds. In the summer, they eat the winged seeds of maple trees and elm seeds, along with berries, apples and other fruit. In fall, they eat and store acorns, walnuts, pine seeds and other nuts. Squirrels are also opportunistic feeders and will dumpster dive or help themselves to pizza crusts and doughnuts lying in the gutter. Anyone with a bird feeder knows that clever squirrels will overcome any obstacles to take advantage of a good food opportunity.

In the fall, squirrels bury hundreds of nuts near the surface to eat during the cold winter months, staying most active around midday, when it is warmest. Squirrels have a highly developed sense of smell, and can smell buried nuts even under a foot of snow! In deep snow, squirrels dig tunnels along the ground so they can smell where they are buried. Squirrels find about 85 percent of the nuts they bury. 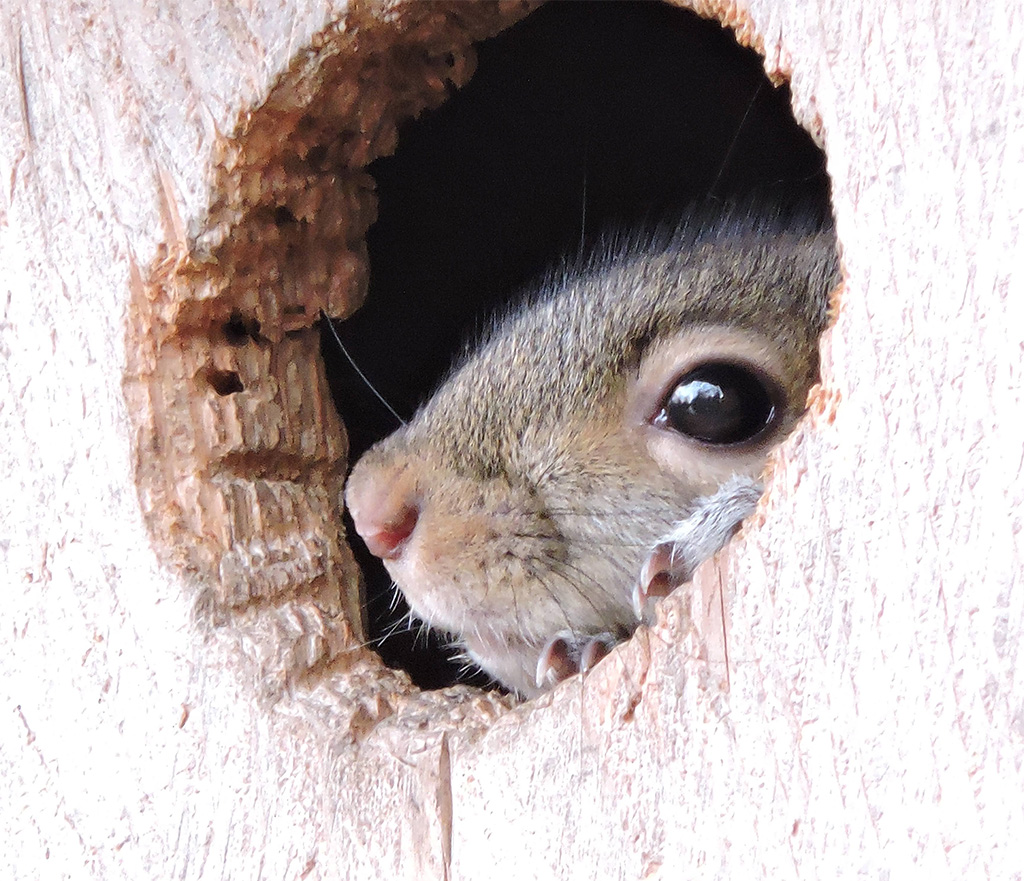 The British traveler John Josselyn wrote an account of his two voyages to New England in 1638 and 1663, during which time he saw Eastern gray squirrels: “The gray squirril is pretty large, almost as big as a Conie [rabbit], and are very good meat: in some parts of the Countrie there are many of them.” Likewise, Thomas Morton wrote about New England’s squirrels: “There are Squirils of three sorts, very different in shape and condition; one is gray, and hee is as bigg as the lesser Cony, and keepeth the woods, feeding upon nutts.”

Morton did not see gray squirrels feeding on pizza in the 1600s, but much of the rest of the squirrel story has not changed: There are many gray squirrels in most of the country, and they still feed upon nuts. Unlike many species, humans did not hunt them to near extinction and, in fact, because of their remarkable adaptability, urban squirrels have learned to live peacefully and successfully near humans. Squirrels in remote areas do fine for themselves, too.

Gray squirrels are opportunistic feeders who will eat whatever they can find. (Photo: Jeanine Farley) 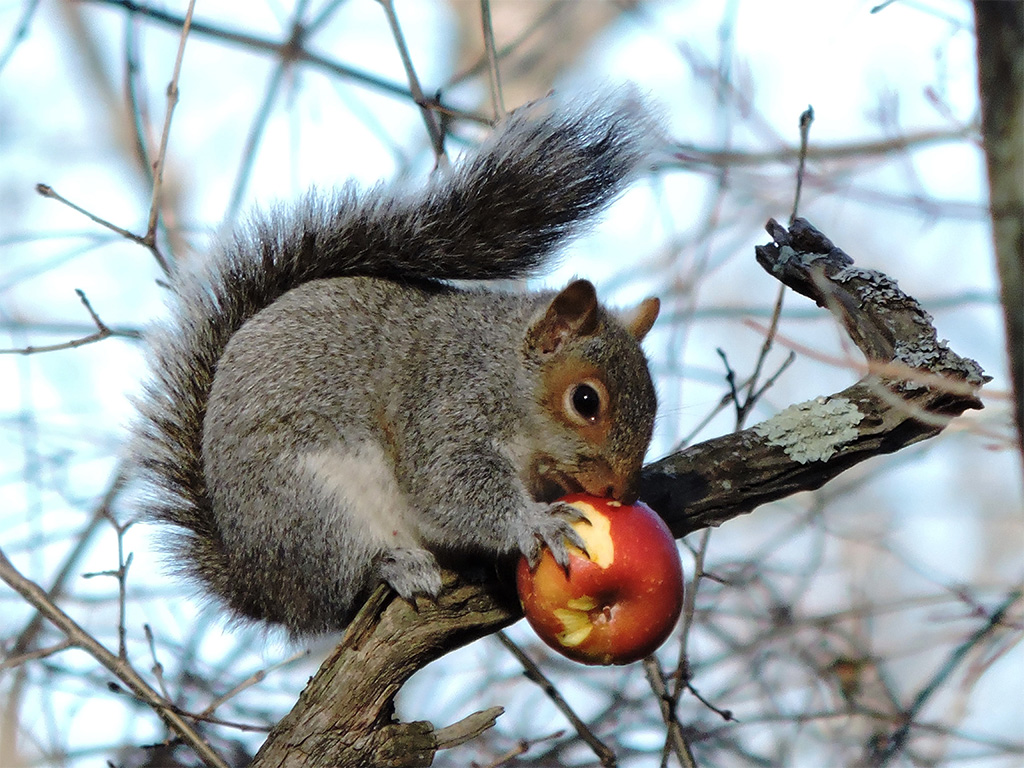 Squirrels have long claws that help them climb trees and hold on to food. (Photo: Ann Schlesinger)