‘Top Gun: Maverick’: Cruise, back in pilot’s seat, hits the same targets with wisdom of experience 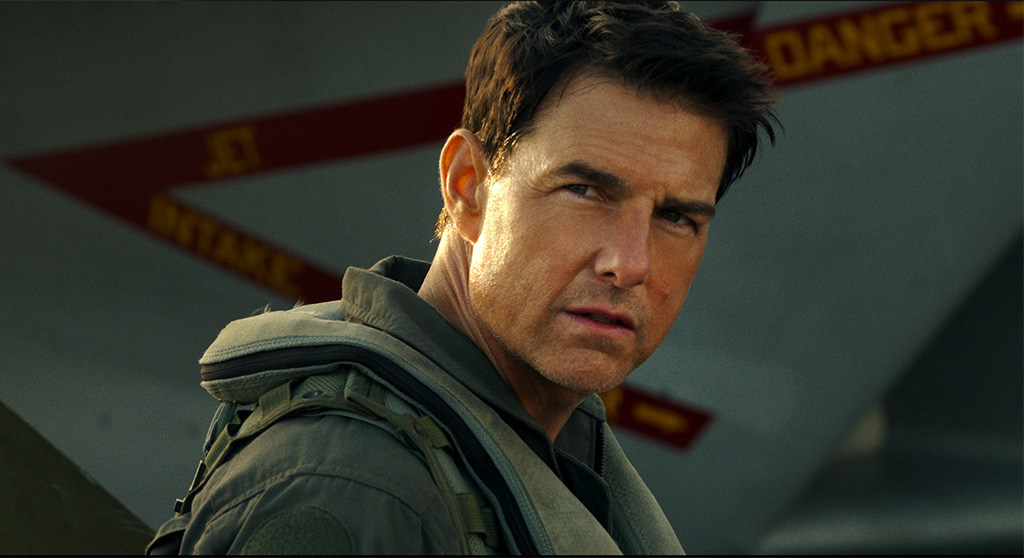 ‘Top Gun: Maverick’: Cruise, back in pilot’s seat, hits the same targets with wisdom of experience

Hard to believe it’s been 35 years since Tom Cruise and Val Kilmer tangled in the Danger Zone. The original “Top Gun” (1986) was branded by ’80s flair (the hair), music (Kenny Loggins and Berlin’s hauntingly excellent “Take My Breath Away”) and the era’s go-for-broke excess (cocaine and unregulated Wall Street), something that got amped up for effect by producers Don Simpson and Jerry Bruckheimer and director Tony Scott; amazingly, what’s on screen in the long-cooking sequel, “Top Gun: Maverick,” eerily channels the spirit and vibe of that earlier film while sliding seamlessly into the now. It’s a neat parlor trick pulled off by director Joseph Kosinski, who worked with Cruise on the sci-fi thriller “Oblivion” (2013), and Bruckheimer (he’s back; Scott and Simpson died during the in-between years). The ace in the hole, as it was then, is Cruise. Do the math: Cruise was 25ish when he made the first one and near 60 here. If you look at him in both you’d be hard pressed to think that 10, let alone 20 or, god forbid, 35 years have passed. Sure, there are some crows feet, but the man is a movie star who maintains his asset like Tom Brady does – the main difference being that Cruise has to look good doing it, and you could argue that doing his own stunts at his age is as dangerous as avoiding oncoming linemen when you’re 15 years younger.

If you put the two “Top Gun” movies on the tarmac together, the newer one would leave the other in its vapor trail with relative ease. The 1986 chapter was steeped in macho cliches, the tang of pre-#MeToo sexism and thin characters pumped up to be more than they were. “Maverick” is more about soul finding than chest beating; while there’s some of the latter, it’s reserved mostly for the new young guns.

To get us off the ground, Cruise’s Maverick pulls an unauthorized stunt (taking a hypersonic jet out for a jaunt when his privileges have been revoked) and gets grounded, busted down and sent back to Top Gun to be a flight instructor when all he really wants is to be the Chuck Yeager of the next century. If that sounds about the same as the old Mav, know that the wisened Mav 2.0 half did the deed to save the jobs of his crew; the 1.0 version would have done it just for a Trumpian high.

The broad team of writers – the story wonks and screenwriters include Christopher McQuarrie, who’s worked with Cruise on several “Mission: Impossible” films – work in tight formation to nail down the details and get the plot tie-ins just right. Kelly McGillis is no longer in the mix as the love interest; she’s replaced by Jennifer Connolly as Penny Benjamin, the daughter of an admiral whom Maverick was rumored to have had a thing with before arriving at Top Gun the first time, when he was a cocky hotshot looking to compete for the crown of top naval air combat pilot. He fell second to a toothy dude named Iceman (Val Kilmer), who’s back in a small, nostalgic bit as a higher-up who’s got Mav’s back. (If you’re unaware of Kilmer’s struggles with cancer, see the recent documentary “Val”; no matter, the few scenes he’s in are done with tender touches all around). Another slick cross-weaving comes in the form of one of Mav’s students, Rooster (Miles Teller), who’s the progeny of Mav’s navigator, Goose (Anthony Edwards), who perished in the first film. It doesn’t help the teacher-pupil dynamic that Mav still bears the guilt of that death, or that he willfully delayed Rooster’s application to flight school. Rooster has his Iceman too, a lad named Hangman (Glen Powell, whose cocksure glee rivals that of the young Kilmer). And to get with the program and the times, there’s a member of the opposite sex by the call name of Phoenix (Monica Barbaro), who not only can fly circles around most of the lads but can mix it up on the football field too.

The film’s driven by some inspired moments. Take Mav out on Penny’s sailboat, where he knows nothing about jibs and cranks (“You’re in the Navy, right?”) or a granite-faced Ed Harris unflinching and unmoved by the torrential jet wash of that sleek, sexy hypersonic bird going Mach 8, 9 and beyond. Watching Mav race his cycle alongside a fighter just taking to the sky, the signature scene of the 1986 film, is a mere box check here by comparison. The mission du jour, once again against an unspecified enemy (clearly either Russian or Middle Eastern, and given all this Putin nonsense in the Ukraine, folks are going to paint it that way), is to destroy a uranium factory or some such thing before it comes online (and they can make nukes, or that’s my guess). Massive complications abound: It’s in a deep mountain ravine lined with surface-to-air armaments, and the only jet capable of getting in under radar is the old F-18; should the team have to dogfight their way out, assuming they don’t crash into a cliff face and get not one but two “miracle” strikes, they then face fifth-gen fighters that can pretty much shred an F-18 with their pilots asleep. It doesn’t help that no pilot has beaten the simulation at Top Gun when we get news that the facility’s going online two weeks ahead of time. As you can imagine, Mav and crew are all in.

Another nicely honed edge to the film comes in the form of Jon Hamm as a top-tier shot caller who thinks Top Gun and folks such as Mav are archaic and ripe for replacement by drones and ’bots. I recently rewatched Sam Peckinpah’s great western “The Wild Bunch” (1969), set on the eve of World War I, in which a bunch of old-school outlaws led by a gruff William Holden are confronted by the automobile, the airplane and a big-ass Gatling gun. They’re out of place, lost in time and outgunned, which only hardens their resolve. And let’s not forget the punchy, indomitable Captain Kirk beating the no-win Kobayashi Maru scenario in “Star Trek: The Wrath of Khan” (1982). Bring on the drones. Mav wouldn’t have it any other way.