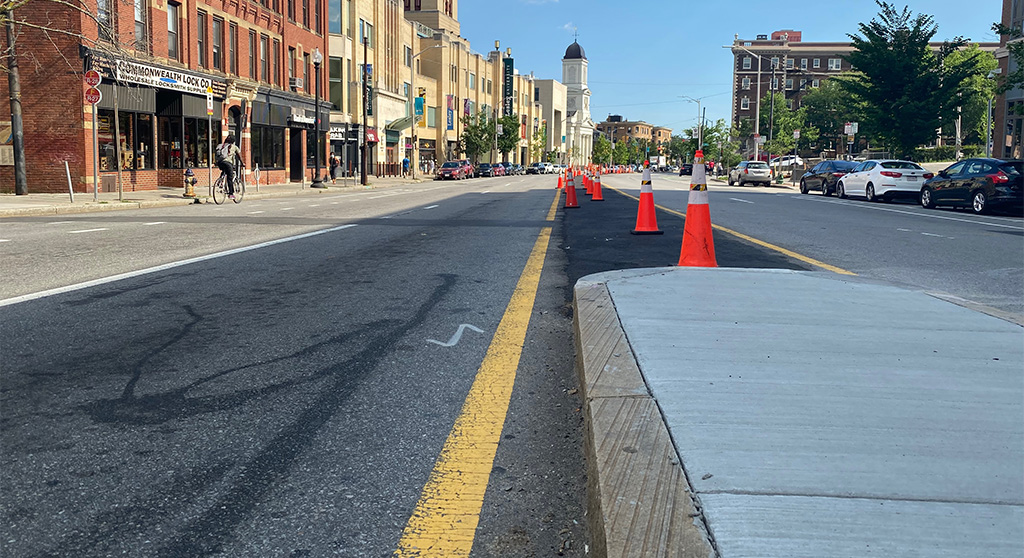 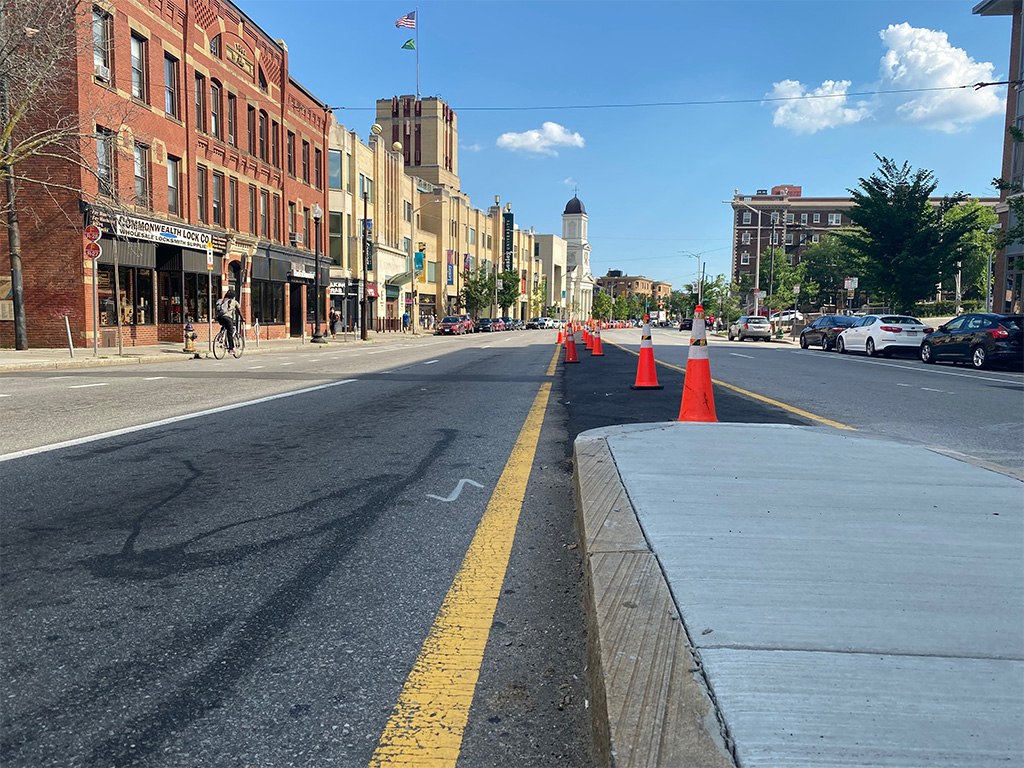 A bicyclist heads south out of Porter Square on Sunday, past where concrete median has been removed to allow for bike lanes to be installed without costing all parking spaces. (Photo: Marc Levy)

The judge was unconvinced by the arguments by the group of business owners and residents called Cambridge Streets for All and swayed by arguments made by the city, which were presented in a virtual hearing June 23 and in documents filed afterward. Pappas posted a memorandum explaining his thinking at around 12:30 p.m., and Cambridge Streets for All responded five hours later to say they would appeal and keep pressing the case.

The rejection of the injunction was due primarily to doubts the group’s case would succeed “on the merits” of its arguments, Pappas said in his memo, but he addressed other points Cambridge Streets for All made through attorney Ira Zaleznik, of the Boston firm Lawson & Weitzen, and seemed to grant none.

Those included the arguments that with its bike lanes, Cambridge was making changes to Massachusetts Avenue that it could not because the avenue belongs to the state; that the City Council lacked the authority to pass its Cycling Safety Ordinance in 2019 and an amendment the next year setting a timeline for bike lane installation, and that instead the city should follow Chapter 455 of the Acts of 1961 and have a traffic board; that having bike lanes “interferes with the right to free movement”; that there was a lack of due process in the passage of the law in 2020; and more.

“The plaintiffs contend that the CSO is inconsistent with and preempted by the State Act because it purports to place authority for the installation of bike lanes in the city manager. The city counters that the CSO does not prevent the traffic director from installing bike lanes, it merely accelerates the installation of the bike lanes and indicates the sequence of that installation,” Pappas said, turning to cite an affidavit by the city’s Traffic, Parking and Transportation chief, Joe Barr, in response.

As to one of the wackier legal claims by the group – that the font size of legal notices was too small to “satisfy the notice provisions” during a pandemic – Pappas cited an affidavit from the acting city clerk that “the font and format of those advertisements ‘is a standard format that is used by [the newspaper] and is understood to be a standard format used by the newspaper for similar city public notices.’” Exhibits showed other efforts to notify the public to hearings about the bike lanes as well, Pappas said.

Cambridge Streets for All filed its lawsuit June 10 saying the lanes and the Cycling Safety Ordinance behind them have “caused enormous disruption” and interfered with their “rights and privileges … by eliminating substantial amounts of on-street parking and loading facilities.”

Zaleznik and Cambridge Streets for All said shrugged off Pappas’ decision in a Friday press release. “We are, of course, very disappointed,” Zaleznik said, “but we expected from the beginning that this case was going to end up in a higher court, no matter who won, so realistically, we have been prepared. Of course, it would be better for my clients who are suffering to have won the initial victory, but this fight is far from over.”

One of the business owners in the suit, Lee Jenkins of Violette Bakers, seemed to link Pappas’ decision with Supreme Court decisions from the past days overturning gun control and abortion laws, among others. “It’s been a bad week for court decisions,” Jenkins said. “We are asking those who support the process in which these flexi post bike lanes were installed to take a careful look at what happened this week nationally and how it feels when one interest out of many takes control and imposes their will on others. It’s anti-democratic whether done locally or nationally, and no matter what the issue.”

Members of the Cambridge Bicycle Safety group were glad to see Pappas’s decision, with lawyer Samuel Feigenbaum calling it “great news and clearly the correct decision legally. This means the city’s rollout of [bike lanes] under the ordinance can continue immediately. We look forward to the city’s implementation of the Porter Square project imminently.”

“Appreciate the city’s strong defense and look forward to continued safety improvements to Cambridge streets,” wrote Itamar Turner-Traurig, one of the group members who joined in a friend-of-the-court filing with arguments against the lawsuit and injunction.

The full press release by Cambridge Streets for All is below:

Cambridge Streets for All, a diverse group of Cambridge residents and business owners, is appealing the ruling by a Middlesex Superior Court judge today to deny the group’s request for a temporary restraining order that would stop the implementation of the Cycling Safety Ordinance and remove the existing harmful separated bike lanes while this case continues to progress in Superior Court. This marks just the first step in an ongoing lawsuit filed by the CSA in June that outlines the undemocratic process used by the Cambridge City Council to amend the ordinance in 2020.

“We are, of course, very disappointed,” said Attorney Ira Zaleznik, but we expected from the beginning that this case was going to end up in a higher court, no matter who won, so realistically, we have been prepared. Of course, it would be better for my clients who are suffering to have won the initial victory, but this fight is far from over.”

State Law (Chapter 455 of the Acts of 1961) requires that Cambridge residents have a say in road changes. Both the Cambridge City Council and director Joseph Barr ignored that law, nor did the judge address it in his TRO ruling. Removal of parking on public streets without regard for the impacts on established communities that depend on them, including business owners, residential neighborhoods and faith communities is a violation of state law, which sets up a procedure for residents to appeal these changes and have a citizen’s appeal board overrule these kinds of decisions by the director of Traffic, Parking and Transportation.

“This ruling was only the first step in our legal action against the city. Not only will this lawsuit continue in the Superior Court, we will appeal the judge’s decision to deny a TRO that would have prevented additional harm to residents and small businesses,” said Joan Pickett, a Mid-Cambridge resident for over 25 years. “We are more motivated than ever to continue to mobilize Cambridge residents and business owners who have been negatively impacted. The City Council’s undemocratic tactics to pass legislation without proper community input, that completely overhauled our streets in the middle of the pandemic, is not the government that Cambridge deserves.”

“It’s been a bad week for court decisions,” said Lee Jenkins, one of the plaintiffs in the case and a business owner and resident in Cambridge. “We are asking those who support the process in which these flexi post bike lanes were installed to take a careful look at what happened this week nationally, and how it feels when one interest out of many, takes control and imposes their will on others. It’s anti-democratic whether done locally or nationally, and no matter what the issue.”

“This is far from over. This is just the beginning of a process we are determined to see through to the final hour. We’re in this fight to keep Cambridge local,” said Christine Perkins, who has owned and operated Pyara Spa & Salon in Cambridge for over 18 years. “Our bricks-and-mortars that did manage to survive the pandemic need support more than ever, but they’ve been handed another set of obstacles instead. Our small businesses are part of the lifeblood of this community, yet we continue to be harmed.”

“Safety for bicyclists and everyone who uses the streets is a community affair, and the mandates of the city’s installation of flexi post bike lanes which require the removal of parking have done nothing but tear apart and harm communities in one neighborhood after another,” said John Pitkin, an Inman Square resident and former chair of the Cambridge Board of Traffic and Parking.

Jenkins concluded, “I’ve been on advisory groups to two presidents, and participation of all stakeholders used to be important. But in today’s polarized world, the democratic concept of sharing the sandbox with others in the community has been lost.”