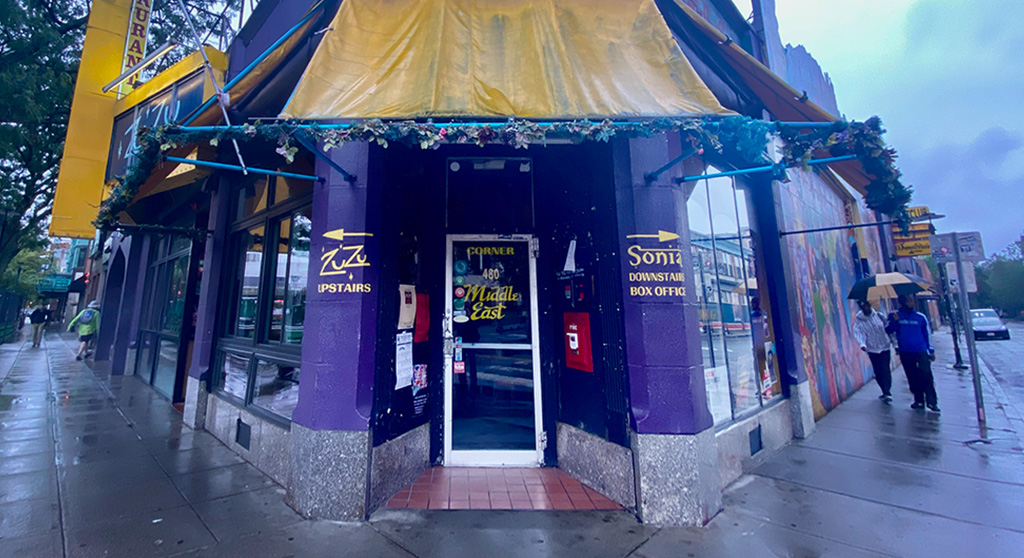 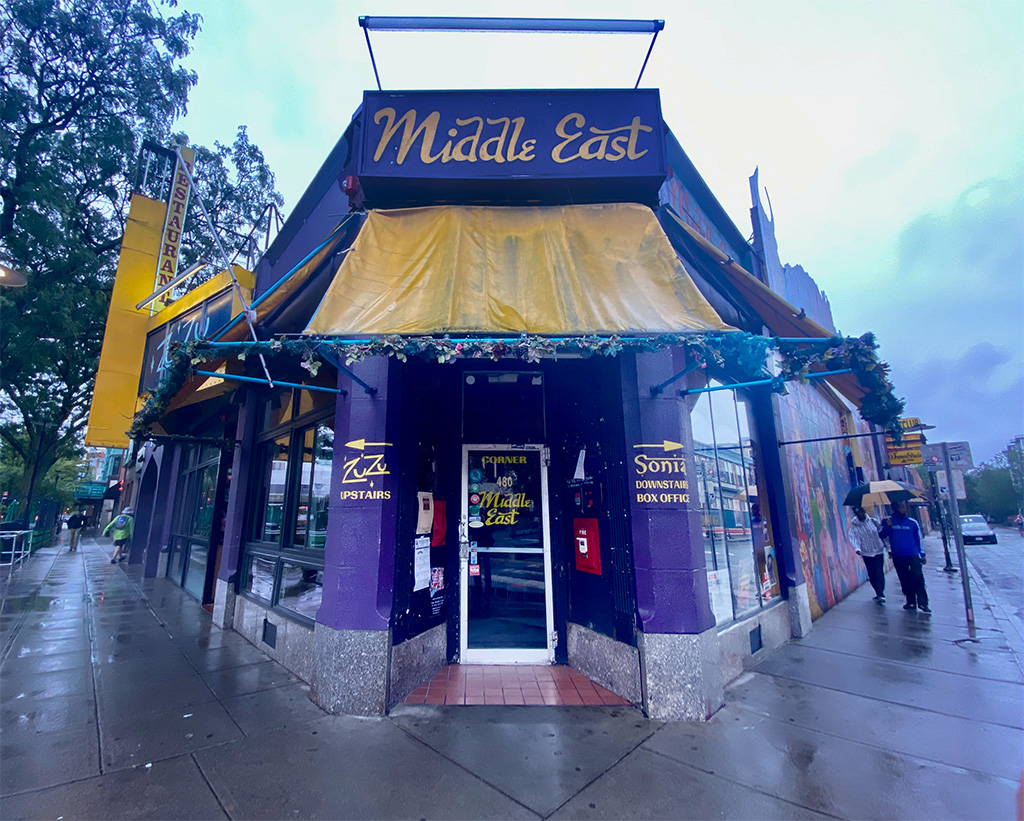 A community meeting will be held Sept. 29 to talk about proposed changes at the Middle East nightclub and restaurant complex in Central Square, developer and principal Patrick Barrett said in a Thursday call. A first public hearing with Historical Commission staff would follow Oct. 6.

The Middle East music stages, including Sonia, will stay open and booking musical acts through 2023 and maybe into 2024, Barrett said.

Plans filed this month with the Historical Commission suggested the Sater family hoped to demolish its one-story structure at 468-480 Massachusetts Ave. and at 2-10 Brookline St. and replace its four music venues, eateries and a convenience store with a six-story, 53,847-square-foot hotel with music stages and a restaurant built in.

The image of the hotel shared with the commission, though, was a placeholder and not reflective of what might be built. “Usually you don’t you don’t spend millions on design before you figure out whether you can knock a building down,” Barrett said.

Barrett had more detail Thursday on what he and the Saters envision for the site, expanding on a post put out Wednesday by the Saters on social media vowing that “the Middle East will remain the heart of Central Square for another 50 years” with plans for a two-stage music venue, a modernized restaurant and event space, and a lounge, as well as a hotel and retail space after “a short interruption during the redevelopment.” Reached by phone Thursday, Joseph Sater said he had no comment beyond what was posted online.

“The plan is to make the whole ground floor music – bring back those two main music venues and a third music venue will be attached to the lounge of the hotel lobby,” Barrett said, alluding to the Middle East’s Upstairs and Downstairs stages that hold 194 and 575 people, respectively. “I would love for it to be like School of Rock. I’m in preliminary talks with an operator who lost their space during Covid that I’d really like to help get a new space.” 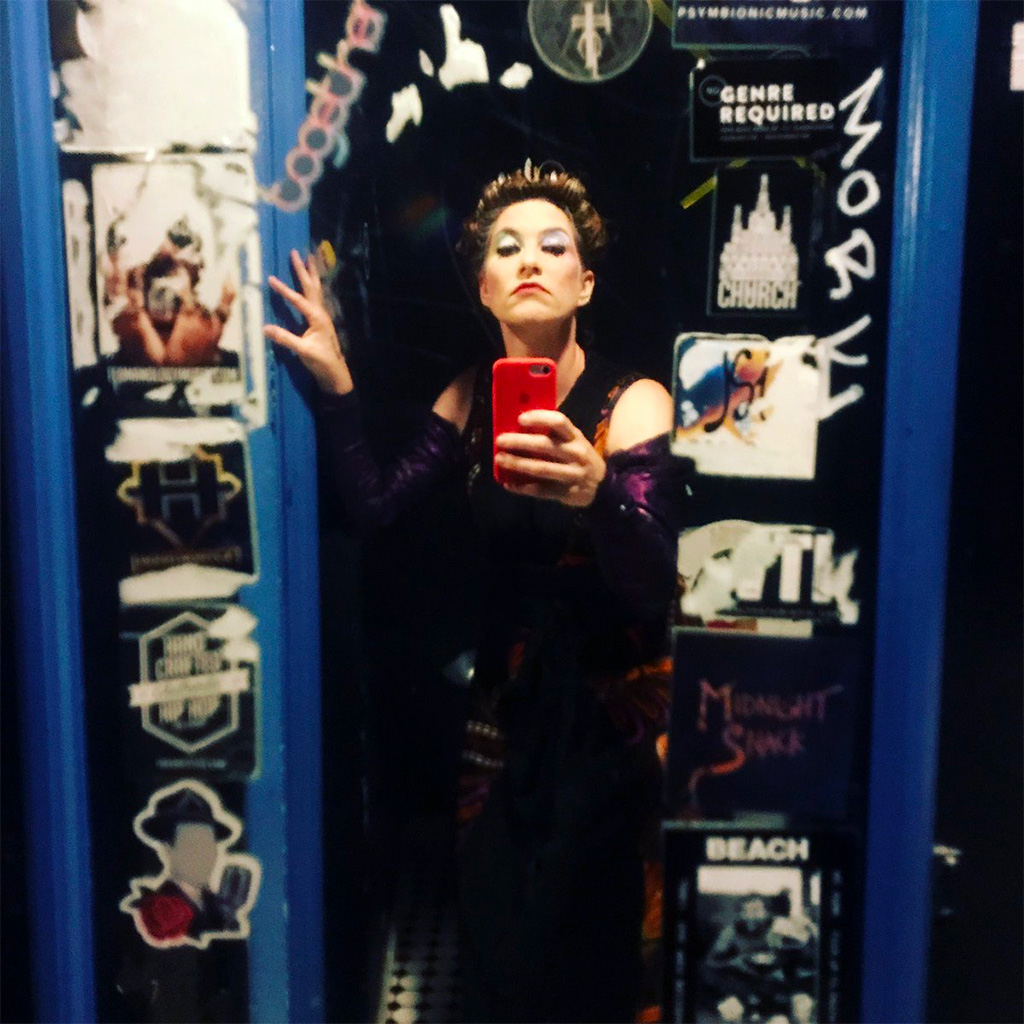 Musican Amanda Palmer tweeted this photo from “the fabled bathroom of the Middle East Downstairs” during a May 17, 2017, visit to perform in Cambridge.

Musician Amanda Palmer responded to plans described online by saying she was glad the Middle East would continue to exist, and hoped “the charm and history of the place won’t be erased with the renovation.”

“This entire joint has meant so much to me and my Boston friends for so many decades,” Palmer said. “I directed my first Boston play downstairs when I was still in high school, and that opportunity changed my life. i saw so many shows that changed my brain within those walls, and the Dresden Dolls had so many seminal moments on those stages.”

The Middle East opened in 1969. The Sater family bought the 23,388-square-foot property around it Dec. 2, 2014, for $7.1 million, seemingly ensuring the long-term life of its clubs, but found it draining to pay off the high mortgage. In January 2020, the site was listed for sale and marketed for use as a high-rise lab building, with co-owner Nabil Sater saying his ideal lease-back arrangement would allow the family-owned clubs to keep operating. Ultimately, no sale took place and the listing was taken down. A plan nearly a decade earlier had imagined adding four or five stories of condos over the clubs, built on trusses so the businesses could stay open during construction. Ultimately, the idea didn’t seem workable, and the Saters abandoned it.

Meanwhile, Barrett reworked residential property with ground-floor eateries nearby at 907 Main St., Central Square, which he bought in 2008, into a five-story boutique hotel, replacing Cinderella’s Italian restaurant but bringing back Toscanini’s ice cream and adding a patisserie and rooftop lounge. (Just as the ground floor of 907 Main is “all sugar,” the future Middle East hotel would have the theme of music, he said.)

He brought the model to the Saters, proposing that the family would stay operators of the venues within the new hotel that would be the property of Barrett’s CSQ Realty.

“To get any of that stuff, the way to pay for it is the hotel on top of it,” Barrett said. “People are curious about whether another hotel is needed in Central Square, but [at 907 Main] I’ve been at 100 percent occupancy for the past two nights and haven’t dipped below 90 percent since March.”

“I’m trying to find way to put uses back in the square that otherwise are not financially feasible,” said Barrett, a musician who said his bands have played venues throughout Central Square and nearby over the decades, including the Middle East (and met his wife at the former T.T. the Bear’s Place). Many of those stages are now gone. “I don’t want to lose any more music venues or any of the things that we have in our cultural district. I want Central Square to embrace what it really is, an arts and entertainment district – with places for housing as well, but I don’t think this is a good site for that.”

The community meeting can provide confidence to go forward with plans for the rock hotel, and it will be vital to know the Historical Commission’s approach to seeing the current property torn down and replaced, Barrett said.