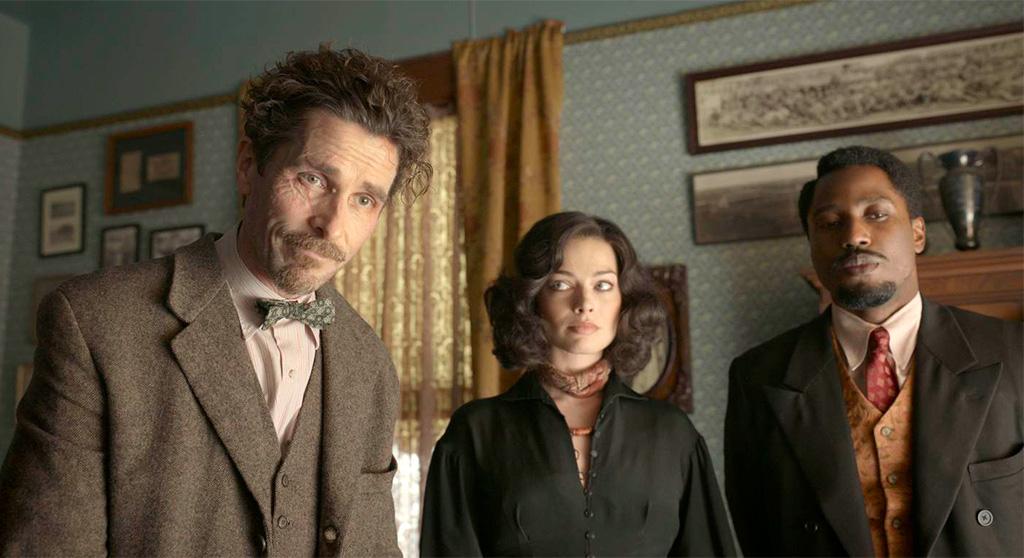 David O. Russell has made some broad-ranging films. His debut, “Spanking the Monkey” (1994) roiled literally in the Oedipal; “Three Kings” (1999), semi-famous for George Clooney and the director rankling each other, was one of my favorites of the 1990s; the locally shot story of Micky Ward in “The Fighter” (2010) was a gritty something-else for Russell; and then there was the almost-never-released “Accidental Love” (2015), an Affordable Care Act satire starring Jessica Biel as a waitress who gets a nail stuck in her head (the original title was “Nailed”) and experiences nymphomaniacal impulses. That last film has an abysmal IMDB ranking of 4.1 and came on the heels of two highly successful Jennifer Lawrence collaborations, “Silver Linings Playbook” (2012) and “American Hustle” (2013). To cleanse his palate of “Accidental Love,” Russell reteamed with Lawrence for the Home Shopping Network spoof “Joy” (2015), but his camera has been silent since. Given the ambitious scope of his latest, “Amsterdam,” that’s understandable.

If some confused Russell’s “I Heart Huckabees” (2004) for a Wes Anderson film, get ready for more: “Amsterdam” has that “Grand Budapest Hotel” (2014) punchiness to it, and an equally eclectic ensemble of quirky A-listers. We begin between the two great wars in New York City (the sets are super impressive) with Dr. Burt Berendsen (Christian Bale), a fallen-from-grace practitioner who uses his own meds, and his pal, Harold Woodman (John David Washington), an attorney looking into the suspicious death of a decorated World War I general (Ed Begley Jr.). To get information, our sleuths seek out the general’s daughter (Taylor Swift), but before she can whisper that big thing her father was on to, bad happenstance befalls her and Burt and Harold are on the hook for it.

From there it’s off to (or a flashback to) France and the Great War, with Burt as an officer assigned to lead a platoon of black soldiers because their last leader, a racist, had Harold, the spokesmen for the platoon, on the verge of mutiny and a likely court martial. In action, the pair get pretty well shot up. Burt loses an eye, and the two spend weeks in a hospital where a smart-mouthed French nurse played by Margot Robbie pulls shrapnel from their backs and buttocks. The war ends, a romance blossoms between Harold and Robbie’s Valerie, who it turns out is not really French, and the three head off to Amsterdam to mend and unwind as Burt, in moments of pause, mewls for his less-than-attentive wife back home (Andrea Riseborough, who played a similar aloofness in “Oblivion”).

But what of that mysterious death of the general and Ms. Swift, looking 1930s glam, onboard for such a brief intonation or two? Well we have the rise of Hitler, Robert De Niro (who worked with Russell on “Silver Linings”) in the mix as another war hero general, Rami Malek as an overly patriotic philanthropist, Anya Taylor-Joy, as his wife with neatly coiled braids that rival those of Princess Leia, Mike Myers and Michael Shannon as bird-loving spies, Chris Rock as Harold’s sergeant-at-arms and the ever elegant Zoe Saldana as Burt’s patient nurse and potential love interest. There’s a lot going on, to say the least, and it builds nicely in a frenetically chaotic murder-mystery way with smart twists and turns. The final end feels like an arduous goose chase without the gander – you almost wish the film never ended. Bale is at his shaggy-dog, disheveled best, far from his turns as Batman but not too far from his maniacal performance of the drug-abusing Dicky Eklund in “The Fighter,” for which her won an Oscar. It’s also good to see Washington, who was somewhat inert as a covert agent in “Tenet” (2020), return to the warmhearted intensity and signs of promise he showed in “BlackKklansman” (2018). The buddy bond that Bale and Washington forge goes a long way to holding “Amsterdam” together, and Robbie’s free-spirited third cements it.