‘The Banshees of Inisherin’: Going to extremes to remove the banal, one Irish finger at a time 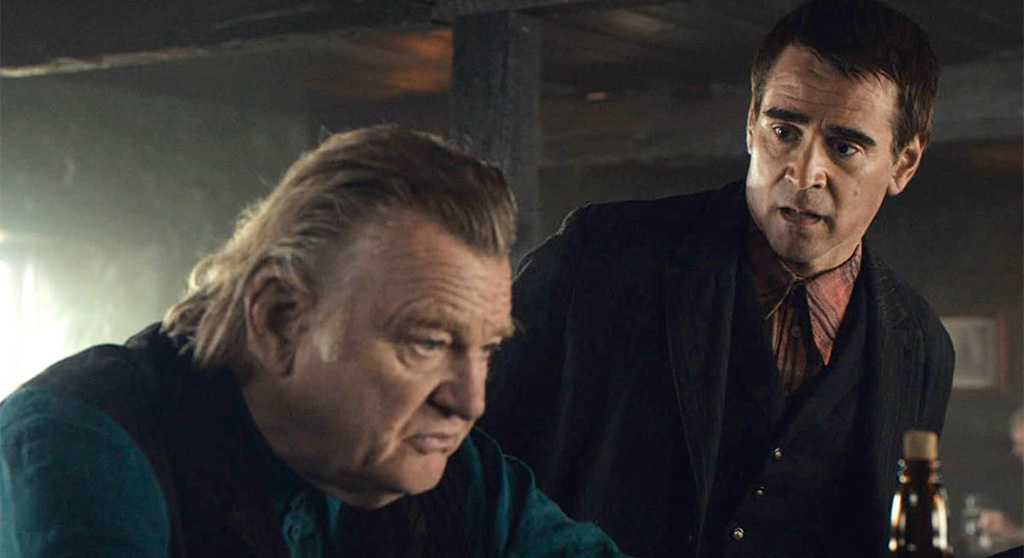 ‘The Banshees of Inisherin’: Going to extremes to remove the banal, one Irish finger at a time

What would happen if the principals in Samuel Beckett’s existential “Waiting for Godot” took their uneasy alliance to a grim frenemy high? That’s about what “The Banshees of Inisherin” amounts to, written and directed by Martin McDonagh, who cut his teeth as a playwright (“The Pillowman,” “The Cripple of Inishmaan”), and whose features “In Bruges” (2008), “Seven Psychopaths” (2012) and “Three Billboards Outside Ebbing, Missouri” (2017) have a very much play-to-the-screen feel to them. “Inisherin” included, they’re dialogue and character driven. If you’ve seen a McDonagh effort and walked away wondering what characters’ motivations were, you were clearly napping.

“Inisherin” returns Brendan Gleeson and Colin Farrell from “In Bruges.” In that film they played two assassins wrestling with life choices; here they play Colm and Pádraic, respectively, gents on a small Irish island where there’s nary a tree but plenty of cliffs and stone-enclosed fields. It’s also 100 years ago, with the Irish Civil War near its apex; we see explosions on the mainland a mile or so away and hear occasional gunfire, but life is fairly isolated from the bigger goings-on. Colm and Pádraic meet each day at 2 p.m. for a pint at the local (and only) pub until one day Colm tells Pádraic he no longer wants to be friends, calling him a dull man who jabbers away about his donkey’s poop or dairy cows’ moods. Siobhan (Kerry Condon, so good in “Better Call Saul” and owning her scenes here), Pádraic’s sister, confirms as much, but is sympathetic to her siblings dismay. Each day the crestfallen Pádraic approaches Colm in the pub, until one day Colm says that if Pádraic doesn’t back off, he’ll cut off one finger from his hand for every infraction. It’s a threat taken seriously by all, as Colm is the pub’s fiddle master, and part of his reason for parting with Pádraic is to spend the remainder of his life doing something more significant – composing the ballad of the film’s title.

Things escalate in small strokes that, as you can expect, are bloody and overreactive, though not to the degree of “In Bruges.” At the heart of the film is the search or want for meaning and art and how one’s legacy is remembered, or not. The film’s gorgeously shot by Ben Davis, who’s worked with McDonagh before (“Psychopaths” and “Billboards”) and done a handful of Marvel entries (“Eternals,” “Guardians of the Galaxy” and “Captain Marvel” among ’em), now with almost a doleful lens emblematic of life on the emotionally barren isle. Some comic relief comes in the Sunday arrivals via boat of a priest (David Pearse) who looks hauntingly like Peter Lorre in “M” (1931) in the confessional booth and drops F-bombs when incensed. Adding to the unhappy olio is Barry Keoghan (“The Green Knight,” “The Killing of a Sacred Deer”) as a strange, simple young man interested in Siobhan and Gray Lydon as his abusive father and town constable, who wields his power inappropriately and has it in for Pádraic for sheltering his son.

There’s a grim, gray pale that hangs over “The Banshees of Inisherin,” one that doesn’t have to be there. The characters make fateful choices for seemingly trite reasons. The main reason to see “Inisherin,” besides Davis’ brilliant work, is Gleeson and Farrell. The former imbues his character with a gruff, steely resolve that clearly says “don’t tinker with”; the latter has to evoke baffled curiousness, a shaggy-dog need for affection even after being kicked, and emotional longing. These are great performance that rise above the film’s material and lift the film to the heights of Davis’ lofty lens looking down on an island of lonely people.