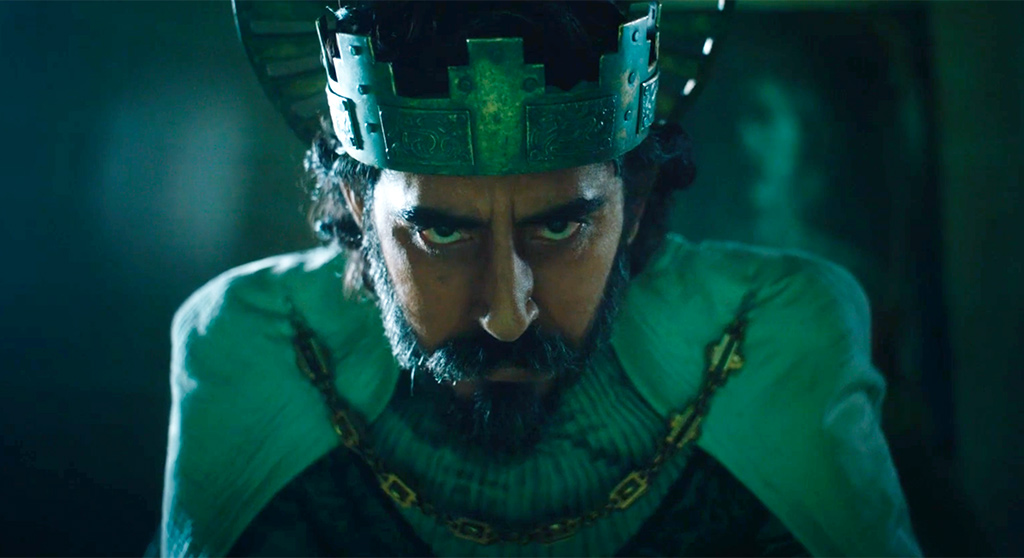 David Lowery’s cinematic adaptation of the late 14th century Middle English chivalric romance (a poem about an odyssey, to be more precise), “Sir Gawain and the Green Knight,” is a hypnotic wonderment and one of the best films – if not the best – of the year so far. The cast and filmmaking are superb. “The Green Knight” is also the edgiest Medieval rendering since John Boorman’s “Excalibur” (1981) mixed arty filmmaking, sex and dark psychodrama into the cauldron of drama that is King Arthur’s court.

At one point the lady of a castle (Alicia Vikander, “Ex Machina”) offers Sir Gawain (Dev Patel, “Hotel Mumbai”) a book from her vast collection and quips that sometimes she rewrites stories to make them more dramatic and relevant, if so moved. As evidenced by “The Green Knight,” Lowery (“Pete’s Dragon,” “A Ghost Story” and “The Old Man and the Gun”) was so moved, keeping the bones from the anonymous original author but adding a few twists and fantastical flourishes that blur the lines of reality brilliantly and make us question the mind of the protagonist.

The yarn begins with a cozy gathering at the castle of the aged King Arthur (Sean Harris, perfectly delicate, yet commanding) on Christmas Day, as Gawain dreams of knightly fame yet spends most of his time hedonistically with his lover (also played by Vikander) and other “millennials” of the Middle Ages. The merriment (you’d think it would be bawdier, but this is a dour lot) is interrupted by the entity of the film’s title (played by Ralph Ineson), who makes a magnificent entry. Part tree, part man, he looks like something from the mind of Guillermo del Toro (“Pan’s Labyrinth,” “The Shape of Water”) and issues a challenge to the court for a knight to strike him a blow; a year later, he gets to strike back at the Green Chapel, his place of residence some six days north. Gawain, seeing an opportunity to earn his wings, jumps at the opportunity and lops off the Green Knight’s head. Easy-peasy, right? Not so fast. The Green Knight scoops up the head and rides off laughing. “One year hence,” he shouts.

It’s a long year for Gawain, who balks on the eve of the quest. A sagely Arthur and the desire for knighthood spur him on, and much of the film is Gawain’s journey. Along the way there’s the bloody remains of battle, a puckish young lad (Barry Keoghan, so good in “The Killing of a Sacred Deer”), a frisky fox, giant women who look like the blown up Joi from “Blade Runner 2049” (2018) and a maiden seeking her head. The grueling sojourn reveals Gawain’s fragility both mentally and physically. He’s not a very apt adventurer, and his chivalry is tested when, starving and near collapse, he arrives at the castle of a twinkle-eyed lord (Joel Edgerton, “Loving”) and his lady (the book-offering Vikander), who welcomes Gawain in and nourishes him. The sexual tension between the three is deeper than Loch Ness, though there’s also the matter of a blindfolded old hag who looms in the corner of every frame during the chapter, ever watching and judging.

The cast is exceptional (including Kate Dickie and Sarita Choudhury as Guinevere and Morgan Le Fay, respectively), but the film is Patel’s, and he shines in the part of a man wanting much without doing. His long face and sad, soulful eyes lend to Lowery’s drab atmosphere of contrasting prosperity and fame, poverty and despair. The other stars are the cinematography by Andrew Droz Palermo, the Irish landscape that poses for his lens and Daniel Hart’s attention-holding score, which turn the film into an immersive experience. The ending adheres to the poem for the most but launches into new areas – creating tendrils, if you will. The whole dreamy rendering is rooted but simultaneously airy, a lofty lore, freakishly forged by visionary filmmaking.