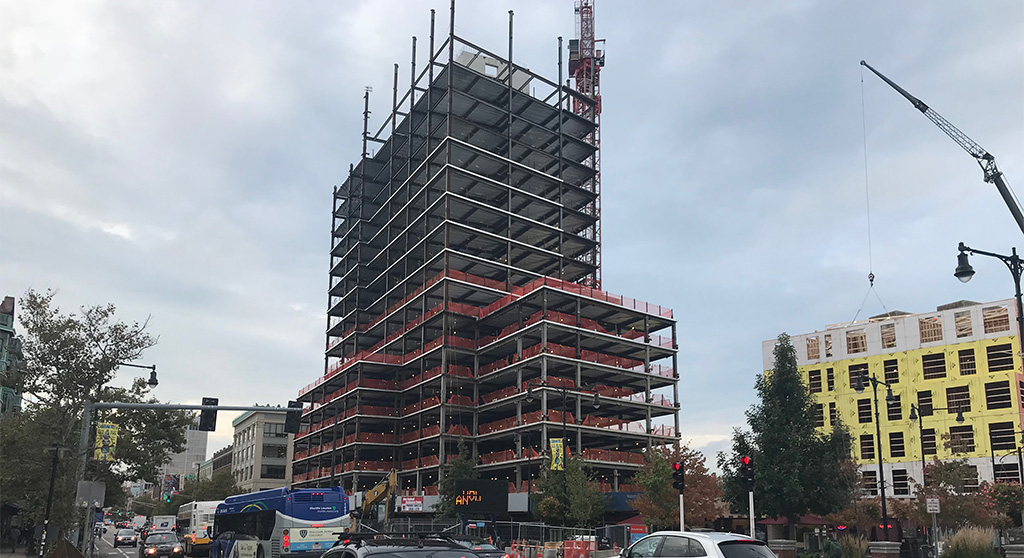 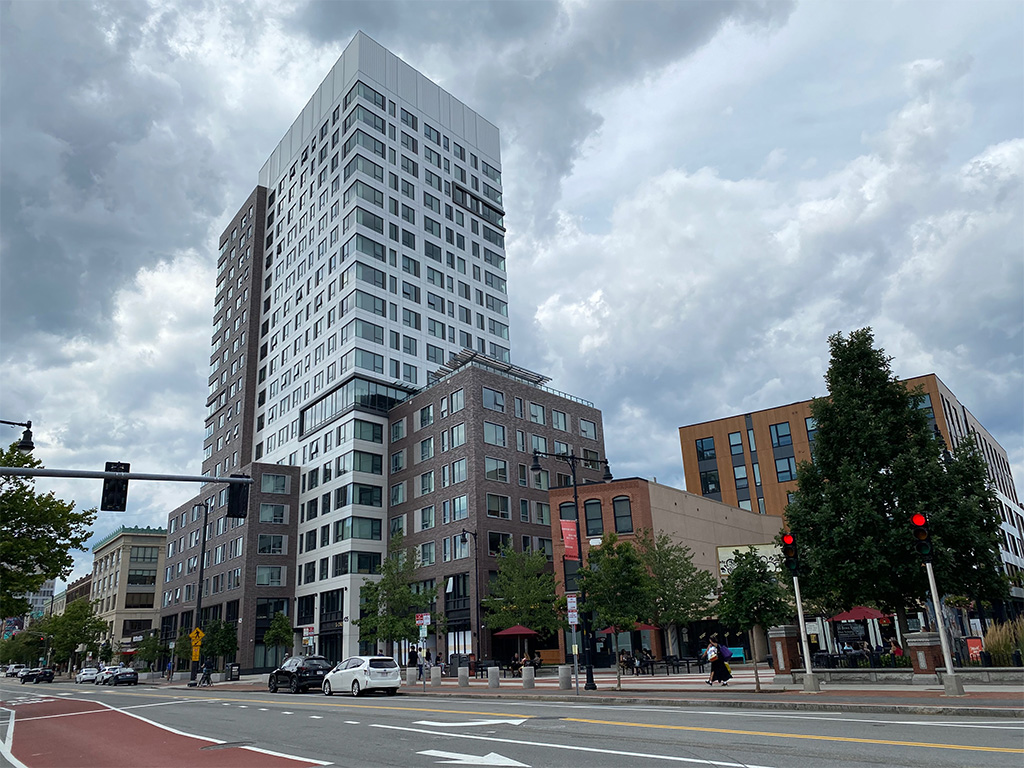 The possibility of 25-story towers of affordable housing rising in some Cambridge squares and 13-story buildings on major streets got a bit further away Monday.

Potential big changes to the city’s Affordable Housing Overlay were slowed as city councillors agreed to send them to two committees for preliminary discussion rather than to the bodies where language gets on track to be voted into law.

The policy order proposed “more new affordable housing and fewer missed or stalled opportunities” than the zoning passed two years ago, with “substantially relaxed dimensional requirements on a citywide network of corridors and squares.” As crafted by councillors Burhan Azeem, Marc McGovern, E. Denise Simmons and Quinton Zondervan. The new proposal focuses on putting the tallest buildings in transit-rich areas such as Central, Harvard and Porter squares and up to 13 stories in areas such as the Alewife Brook and Fresh Pond parkways, Bishop Allen Drive, Broadway, Concord and Massachusetts avenues, Memorial Drive and Albany, Cambridge, First, Mount Auburn, Prospect and Sidney streets.

“We’ve spent the year doing research,” Azeem said in introducing the order, noting that the first emailed exchange on the idea was sent Jan. 28. “We really tried to limit our scope as much as possible. Some of the amendments are still significant, but we chose 14 streets and [a handful of] squares to make our amendments – this means that 90 percent of the city by surface area is not touched at all.” The heights were set to lower the cost of building per unit, he said.

The original zoning passed Oct. 5, 2020, was intended to eliminate design limits and hurdles for developers putting up buildings of 100 percent affordable housing – including in parts of the city dominated by single-family homes and so far lacking in affordable units. More than a year in, there have been mixed results with little new territory added.

The introduction of the order alarmed some residents, who sent letters to councillors and spoke during public comment of “radical” changes that seemed to be sneaked in for overnight approval just before Thanksgiving – though even the fastest track proposed Monday still would have sent the zoning off for a likely three months of discussion.

Diverted to other committees

The order entered debate Monday with zoning language for the Ordinance Committee and Planning Board, which would start a 90-day clock on passing the law or letting it expire.

It ended, after roughly an hour of debate, headed instead for separate hearings with Simmons’ Housing Committee and the Neighborhood & Long Term Planning Committee chaired by councillor Dennis Carlone. An attempt by Simmons and Zondervan to mandate a single, joint hearing was defeated by Carlone’s insistence that the focuses were too different to be combined.

“This is the most dramatic, complex change in zoning that affects neighborhoods and neighborhood business districts since I’ve been here, and that’s 50 years. It deserves both Housing – which is primarily within and the immediate surroundings – and Neighborhood & Long Term Planning, because these are potentially dramatic changes to the character of neighborhoods,” Carlone said.

There was also an attempt by Zondervan to set a Jan. 31 deadline for those hearings “so that we know that this is not going to drag on indefinitely.” Carlone said he was “almost insulted” by the comment, since he’d vowed to hold hearings as soon as January if he got the drawings and studies underlying the proposed AHO amendments.

The deadline was defeated in a 4-5 vote; the four sponsors of the order made up the minority.

“I personally am very interested in talking about increasing height and density on the main corridors and squares – whether the numbers that have been chosen and thrown into this proposal are the right ones, I don’t know. That’s why we need to have a much longer conversation,” said councillor Paul Toner, who made the suggestion to redirect the proposal that ultimately passed 8-1, with only Zondervan opposed.

Vice mayor Alanna Mallon called the proposal “a tough spot to be starting from” considering that the original AHO had “five Housing meetings before we even had any zoning language in front of us” and that she’d heard city planners weren’t consulted on the numbers. Councillor Patty Nolan said people felt “blindsided.”

The number of communications received by councillors from alarmed residents was a factor, Toner said, despite appreciating Azeem’s enthusiasm and the work put into the proposed changes.

“It needs a lot of discussion. And I think the reason we’ve gotten all these emails is it sounds like there’s been conversations going on since Jan. 28 – I don’t know with who or how many people, but obviously the general community wasn’t aware of it,” Toner said.

Opposed residents showed up calling the proposal “radical,” with “confusing” guidelines that would result in “massive” buildings with no open space – and the terms “appalled,” “alarming,” “extreme” and “reckless” made repeat appearances in testimony as well.

“We met in an emergency meeting last night by Zoom, and across the city people were stunned by this – shocked, angered, frustrated,” said Suzanne Blier, president of the Harvard Square Neighborhood Association. “Some of them are working on design and zoning issues at Alewife collaboratively, and on Cambridge Street collaboratively, on Northern Massachusetts Avenue collaboratively. This would destroy all that work. It has nothing to do with the Envision plan,” she said, referring to a three-year development planning process.

They were countered by supporters of the changes such as Charles Franklin, who considered the amendments “measured” and “thoughtful” and – though he recognized the law required conversation that prevented the zoning from being adopted overnight – “ready to pass as is.”

Resident Jessica Sheehan said she appreciated the leadership shown in presenting the order. “I have heard the word ‘radical,’” Sheehan said, referring to opponents’ public testimony. “Personally I would say ‘bold.’ And so many of us who care about housing affordability have been asking for boldness.”

Even had the order proceeded as Azeem and his co-sponsors wanted, it was unlikely to speed through the legislative process. Planning Board members voiced serious misgivings in December about the projects arriving before them under the existing overlay and said then they were looking forward to the AHO’s five-year review. They could use the amendments as a chance to try to literally reshape the zoning.

Carlone sounded as skeptical as anyone, using the debate to call again for the city to buy land and lease it to developers to lower the costs of building housing only a few stories high. The amendments continued a slippery slope toward construction of giant buildings that are infeasible economically and bad for building community, he said.

“When Mass + Main was approved, I said this is just opening the door and we were told oh no, no, no,” Carlone said, referring to the 19-story Watermark Central tower in Central Square. “When the AHO was approved, [we were told] ‘This is all we need. Economically, the numbers work out.’ … This is just another step forward in degrading regulation.”