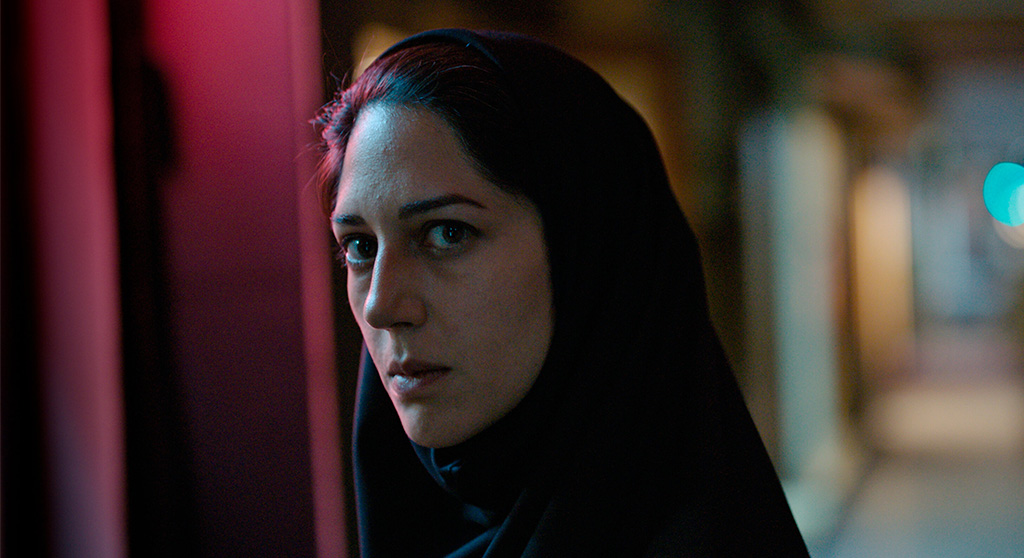 It’s more of the “(Some of the) Best of 2022” at The Brattle Theatre this week, with several pet favorites of Day film critics that didn’t make our collective top 10. That includes the Afrofuturist musical “Neptune Frost,” playing Monday. (The real Neptune Frost was a slave who lived in Cambridge, who became free, fought in the American Revolution and is buried in the Old Burial Ground in Harvard Square.) The film was a rave for Ally Johnson, as was the documentary “All the Beauty and the Bloodshed” (reviewed below and playing Jan. 29); we all were enamored with Charlotte Wells’ “Aftersun” (Tuesday), and there’s two of my faves that deal with true crimes and social issues: the Iranian serial killer and courtroom drama “Holy Spider” (Wednesday, reviewed below) and the mother’s journey for justice in the wake of one of the most heinous hate crimes in U.S. history, “Till” (with Danielle Deadwyler giving a knockout performance; it plays Jan. 29). Others on the list include “Pearl” by Ti West and Mia Goth, as well as “X,” the ’70s porn industry/slasher genre homage sequel that the two filmed in the same year. “X” and “Pearl” play as part of a double feature on Thursday. On the animation side of things there’s Richard Linklater’s boyhood fantasy “Apollo 10½: A Space Age Childhood” (Saturday), the adorable, abandoned mollusk tale “Marcel the Shell with Shoes On” (also Saturday) and “Guillermo del Toro’s Pinocchio” (Friday and Saturday). Also on the week’s agenda are more notables from last year in the lo-fi online horror flick “We’re All Going to the World’s Fair” (Tuesday) and “Crimes of the Future,” that latest outré contemplation on body mutilation from filmmaking icon David Cronenberg (Friday).

There’s much happening over at the Landmark Kendall Square Theatre this week, with not only the Tuesday Kubrick Retro Replay – “Barry Lyndon” (1975), a film polarizing among fans of the director – but a weeklong filmmaker focus on Rian Johnson. Sorry there’s no “Star Wars: The Last Jedi” to be had, but there are plenty of mysteries and thrillers, beginning with one likely to see a bunch of Oscar nods come Tuesday: “Glass Onion: A Knives Out Mystery,” with Daniel Craig as detective Benoit Blanc seeking to solve a murder on a billionaire’s Greek isle; Johnson’s high school noir “Brick” (2005), which brought Joseph Gordon-Levitt to the film industry’s attention; the brotherly scam caper “The Brothers Bloom” (2008) starring Adrien Brody, Rachel Weisz and Mark Ruffalo; the time-twisting sci-fi thriller “Looper” (2012), pairing Bruce Willis with Gordon-Levitt; and naturally, “Knives Out” (2019), the Boston-shot base for Blanc and a franchise. Each film has multiple screenings.

The Somerville Theatre gives a deserved weeklong, big-screen tribute to the Daniels’ genre-bending immigrant-tale-turned-IRS-audit-nightmare-turned-gonzo-multiverse hopscotch, “Everything Everywhere All at Once.” The film, directed by Dan Kwan and Daniel Scheinert of Emerson, is likely to garner the lion’s share of Oscar noms when the Academy announces its selections Tuesday. The film did well at the Golden Globes and won Best Actress (for Michelle Yeoh) and Supporting Actor (for Ke Huy Quan, previously known mostly for childhood turns in “Indiana Jones and the Temple of Doom” and “The Goonies”) from the Boston Society of Film Critics. (Ally Johnson and myself are members.) The film also made the Day’s Top 10 Films of 2022 list.

The Harvard Film Archive this week focuses on a barrier-breaking Japanese film icon who passed away in 1977, kicking its “Kinuyo Tanaka – Actress, Director, Pioneer” program into high gear with Kenji Mizoguchi’s classic “Ugetsu” (1953), a surreal contemplation on the ravages of war and the plight of women. Revered by Akira Kurosawa, the film would also become something of a road map for Hiroshi Teshigahara’s immersive “Woman in the Dunes” (1964). “Ugetsu” stars Tanaka and plays Monday and Friday. The program then shifts to Tanaka’s work behind the lens with “Forever a Woman” (1955, Friday) about a mother of two struggling with an unfaithful husband, breast cancer and a desire to be a poet; “Love Letter” (1953, playing Jan. 29), Tanaka’s directorial debut depicting love and identity in post-World War II Japan, and her sophomore entry, “The Moon has Risen” (1955, also Jan. 29), another postwar contemplation. It’s set around a widower (Chishû Ryû) trying to raise three daughters on the premises of a temple. (Tom Meek)

Playwright Florian Zeller’s directorial debut, the Oscar-winning film adaptation of his play “The Father” (2020), was a powerhouse that replicated the perspective of an elderly man with dementia. If you have been waiting for Zeller’s next groundbreaking movie, prepare to be disappointed. The plot of  with “The Son”: Disrupting the domestic bliss of new love, ex-wife Kate (Laura Dern) announces to her former hubby, Manhattan lawyer Peter (Hugh Jackman) and his second wife, Beth (Vanessa Kirby), that their son, Nicholas (Zen McGrath), has not been going to school. When Peter checks in with Nicholas, his son begs to move in with him, and Peter agrees. The arrangement has Beth doing the day-to-day rearing while Peter thinks an occasional jocular exchange will solve Nicholas’ crushing depression, an obvious diagnosis that does not come until the denouement. Given the great cast, Zeller suffers a sad sophomore slump that perpetuates stereotypes about people with mental illness being dangerous. Even if Zeller was portraying a well-intentioned father’s ineptitude, Peter’s an inert, void protagonist whom, for some reason, every other character adores for no obvious reason other than his ability to deliver a seemingly ChatGPT-generated response with a warm affect – yawn! These prose dumps hint at Peter’s depth, but Zeller shows only a vapid, superficial shell of a tall, handsome man incapable of substantial thought. Anthony Hopkins makes a stunning cameo to chew out his progeny, but it is not enough to save this lackluster movie. (Sarah Vincent) At Landmark Kendall Square Cinema, 355 Binney St.

Displeased that her mom, Grace (Nia Long), is going to Colombia for a week with her boyfriend, Kevin (Ken Leung, “Lost”), 18-year-old June (Storm Reid) drowns her sorrows in beer-fueled ragers and evades the watchful eye of Grace’s best friend and lawyer, Heather (Amy Landecker, “Transparent”). June sobers up to meet her mom at LAX, but her mom never arrives, setting June on a frantic race against time to recover hotel security camera footage before it gets erased. This stand-alone sequel to “Searching” (2018) is part of a budding screen-life genre, a found-footage mystery-thriller in which nearly every scene is shown on a computer screen or smart device. Enjoyment of this installment will depend on your age. While Reid is engaging and sympathetic as an innovative, high-tech Nancy Drew, she cannot bring the same acting range that John Cho did in the first film as the father looking for a lost family member. Long and Leung quietly steal the movie as their characters exchange vulnerability-exposing messages on an online dating service during their courtship, convincing as second-act people falling in love despite the experiential baggage they bring to a relationship. (Sarah Vincent) At Apple Cinemas Cambridge, 168 Alewife Brook Parkway, Cambridge Highlands near Alewife and Fresh Pond, and AMC Assembly Row 12, 395 Artisan Way, Assembly Square, Somerville.

The latest from Laura Poitras (“Citizenfour”) embeds us with artist and activist Nan Goldin, whom we meet as she seeks retribution from the Sackler family by founding the organization P.A.I.N (Prescription Addiction Intervention Now) after a near-fatal overdose. We see members taking a stand in renowned museums to invoke impact (think the climate protesters throwing soup on the Mona Lisa), but it’s the snapshots of her earlier life as an emerging photographer in the ’80s and ’90s that hold the most emotional weight. From her work chronicling the HIV/AIDs crisis to those documenting the inner lives, romance and camaraderie found in the LGBTQ+ community and the fallout of an abusive relationship, her art and the stories it tells take center stage. It’s poignant because, in the case of Goldin and other marginalized artists, advocacy often informs the result, and vice versa. Poitras masterfully depicts decades with seamless transitions and deft editing. It’s a startling, evocative work that will leave audiences informed and wanting to learn more. (Ally Johnson) At The Brattle Theatre, 40 Brattle St., Harvard Square.

Ali Abbasi’s riveting, true-crime serial killer thriller recounts a spree in Iran that yielded 16 victims in the early 2000s. As Saeed Hanaei, a construction worker who feels the need to purge the Shiite hub of Mashhad, Iran, of prostitutes, Mehdi Bajestani delivers a performance that mesmerizes as much as it terrifies, and never flinches. His preferred mode of performing those cleansing acts is strangulation, and the violence is rendered with prolonged and disturbing intimacy – think Hitchcock’s “Frenzy” (1972) and take this as a big trigger warning. After such deeds, Saeed simply returns home to his family as if weary from a day’s work. When the film shifts to the courtroom, the grabber is the throng of people in the street supporting Saeed like he’s a hero come home from the war. (Tom Meek) At The Brattle Theatre, 40 Brattle St., Harvard Square.