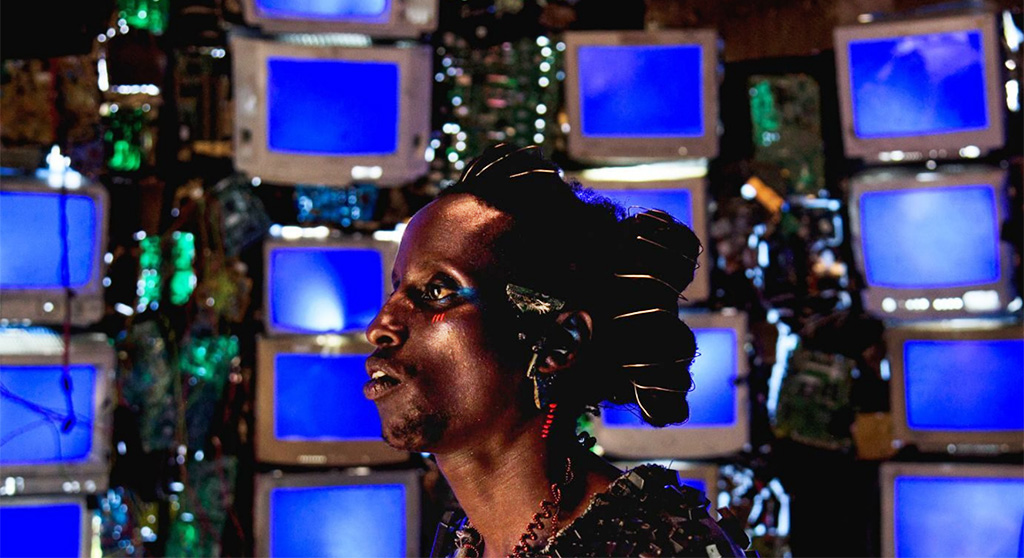 Sunday is Juneteenth. There are plenty of movies concerning the end of the Civil War and of slavery, yet given George Floyd (and all the people for whom he’s representative) and Black Lives Matter, the struggle for freedom and equality clearly continues. Here are two suggestions for Black Independence Day that underscore the American Black experience in not-so-joyous, eye-opening ways. First up is “12 Years a Slave” (2013), Steve McQueen’s masterful tale of an antebellum freeman in the North (Chiwetel Ejiofor), duped, abducted and sold into slavery in the South. That it’s a true story makes it even more horrific and shameful. Director and performer immerse you seamlessly in the hell that so many endured – one can only imagine the hope and joy of the Juneteenth announcement in 1865. The incredible cast includes Brad Pitt, Michael Fassbender and Lupita Nyong’o. Ejiofor, who is fantastic, carries the film with wide eyes that convey full emotional sentences without saying a word. The performance would earn him a rightful Academy Award nomination, and Nyong’o and the film would take home golden statues. (Tom Meek) On HBO Max.

Given the social justice aspect of opening marijuana dispensaries in Massachusetts, Ava DuVernay’s documentary about the racial inequities of the justice system, “13th” (2016), is a good refresher on why, even after Juneteenth, Black Americans continue to suffer. Jim Crow and the war on drugs are among the many social shackles DuVernay (“Selma”) documents in discussing systemic racism. The title refers to the Amendment that abolished slavery. (Tom Meek) On Netflix.

Also to that end, Cambridge resident Evangeline M. Mitchell will have a short playing June 26 at the 24th incarnation of the Roxbury International Film Festival (a hybrid event again this year). The film, “Becoming Black Lawyers,” chronicles the experiences of being Black in predominantly white law schools. Mitchell herself is a lawyer and studied documentary arts at the Center of Documentary Studies at Duke University. Born in the South, Mitchell fell in love with Cambridge when she came to the School of Education at Harvard for a master’s degree. “Becoming Black Lawyers” is her first film; her next project is a chronicle of historically Black law schools in America. (Tom Meek)

This week at The Brattle Theatre is the area premiere of the Afrofuturist sci-fi punk musical “Neptune Frost” (see mini review below) and a similarly themed sidebar screening (Tuesday and Thursday) of Djibril Diop Mambéty’s French New Wave-influenced fantasy-drama, “Touki Bouki” (1973), about two young lovers longing to leave the hardships of Dakar for the glamour and comforts of France. On Wednesday, the Revolutions Per Minutes Festival presents “Kathryn Ramey: White Women Are a Curse Against Their Sex,” a series of shorts covering Ramey’s 30 years of films that cut “against the cisheteropatriarchy by a person living with a uterus.” Ramey will attend. Getting a premiere local run Friday is “Hit the Road,” the debut of Panah Panahi, son of the great Iranian filmmaker and political dissident Jafar Panahi. (Our review is forthcoming.) Also this week: Classic Hong Kong action staples starring Maggie Cheung and Michelle Yeoh, “The Heroic Trio” (1993, Friday, Saturday and June 27) and “Executioners,” aka “The Heroic Trio 2” (also ’93, on June 25 and June 28). (Tom Meek)

The Somerville Theatre gets deep into big-screen extravaganzas with the “70 mm & Widescreen Fest.” Kicking it off is seagoing fare: the adaptation of the Herman Melville novel “Billy Budd” (1962, Monday) starring a young Terence Stamp (“The Limey”) in the title role with an impressive ensemble that includes Robert Ryan (“The Wild Bunch”), Melvyn Douglas and Mr. Hercule Poirot himself, Peter Ustinov, who also directs. Also from the high seas is “Mutiny on the Bounty” (also ’62, Tuesday) starring Marlon Brando and directed by Lewis Milestone (“All Quiet on the Western Front”). From the disaster-film era of the ’70s comes “Earthquake” (1974) on Thursday, starring Charlton Heston and Ava Gardner. And for big, noisy and fun actioners, it’s Arnohld in “The Last Action Hero” (1993) and Walter Hill’s urban dystopia “Streets of Fire” (1984) with a young Diane Lane as a pop diva and Willem Dafoe as a devilish greaser. Both films play Friday through June 25. (Tom Meek)

Unlike any other film in theaters right now, “Neptune Frost” is an explosive, mind-melting cinematic experience that eschews linear, narrative format for something more ephemeral and raw. Directed by Saul Williams and Anisia Uzeyman, “Neptune Frost” is an Afrofuturist musical following a group of escaped coltan miners who form an anti-colonist computer hacker collective. Their goal? To attempt a takeover of the authoritarian regime that has been exploiting the region’s resources and people. Righteously riotous, the musical is piercing and the storytelling bold, with arresting visuals that are vibrant and otherworldly despite the very real trauma borne by the story. Along with a glimpse at a radical future in which a village in Rwanda is made up of computer parts, the film stands out for the ways colors are captured so crisply against nature. Light and energy bounds from the screen. Imaginative and innovative, the film is an exhilarating breath of fresh air. (Allyson Johnson) At The Brattle Theatre, 40 Brattle St., Harvard Square, through Thursday.

Chloe Okuno’s feature debut is a moody psychological thriller that feels fresh despite a wash-rinse-and-repeat narrative. Much of the film’s success hangs on the sterile eeriness that Okuno conjures up and, even more so, the chemistry between and performances by Maika Monroe (“Honey Boy,” “Bokeh”) and Burn Gorman (“The Expanse”) as tormented victim and possible stalker. The two encounter each other in Romania after Julia (Monroe) and her husband (Karl Glusman) move there for a job opportunity (he’s fluent in Romanian, she’s not, and thus more isolated). Julia notices a male figure across the way watching her who starts to appear on the subway, the supermarket and nearly everywhere she goes. There’s also a serial killer on the loose targeting young women, which adds to the paranoia building in Julia’s head – and each time she alerts her husband or the authorities to Gorman’s follower, it registers as an explainable red herring. Look to see more from Monroe, Gorman and Okuno in the future. (Tom Meek) On Amazon Prime Video starting Tuesday.

In this dour, finding-yourself comedy, director Sophie Hyde carefully peels back the emotional layers of a recent widow looking to discover her inner woman. Emma Thompson stars as retired schoolteacher Nancy Stokes, who has slept only with her husband – recently deceased – and decides to adventure into the realm of sexual fulfillment by hiring the male escort of the title (Daryl McCormack, who reminds some of a young Roland Gift and has an Irish accent to boot). Leo’s a natural charmer and as deft a conversationalist as he is a lover, but has his boundaries and remains aloof on certain subjects – such as his real name, past and why he does what he does. The two meet for several trysts in a cozy hotel where connections are made and parts of their pasts shared. The film is playlike in structure and works because of its capable leads, delicately meted emotional rawness and a vulnerability well mixed with moments of giddy whimsy and palpable passion. (Tom Meek) On Hulu.

Cooper Raiff directs, writes and stars in this sophomore, slightly autobiographical film, winner of the Sundance Film Festival Audience Award for U.S. Dramatic Competition. While working at a fast food eatery and searching for a “real job,” Andrew (Raiff), a 22-year-old Tulane marketing grad, lives with his mom, Lisa (Leslie Mann), crashing on the floor of the cramped room of his adoring little brother in his stepdad’s house. Andrew’s concern for his mother’s mental-health struggles motivates him to side with marginalized people at bat mitzvahs he attends. At one, he meets Domino (Dakota Johnson), an engaged single mom and her autistic daughter, Lola (newcomer Vanessa Burghardt). Parents at the party, impressed with his attentiveness and infectious enthusiasm in engaging a cadre of sullen teens, enlist/hire Andrew as a “party starter” for future bat mitzvahs and the like. Romance with the spoken-for Domino drives the tension of the film, as well as Andrew’s struggle to break into adulthood. The quarter-life crisis takes a toll on Andrew, mostly when love interests curb his sensibilities. While Raiff is endearing, Johnson shines as the film’s star. Since her notorious debut in the “Fifty Shades” franchise, Johnson has become a magnetic actor in “The Lost Daughter” (2021) and two collaborations with Luca Guadagnino, “A Bigger Splash” (2015) and “Suspiria” (2018). Even more ambitious is her upcoming turn in the latest take on Jane Austen’s “Persuasion.” (Sarah Vincent) At Landmark Kendall Square Cinema, 355 Binney St., Kendall Square and on Apple TV+.

After “Oblivion” (2013) and “Top Gun: Maverick” last month, Joseph Kosinski looked to be the real deal. Then out comes this Netflix film, a neat concept on paper that plays like a cheap knockoff of “Gattaca” (1997), which to this guy also felt like a cheap take on the near future – like “Logan’s Run,” which at least had the excuse of coming out in the ’70s. In this near-later-now, prisoners have the option to live in a posh Scandinavian-styled pavilion on a remote island if they agree to be experimented upon with mood-altering and mind-controlling drugs. Our handsome mad scientist, Steve (Chris Hemsworth), injects his subjects with drugs that make them tell their inner feelings, fully comply with commands or get them so horny they pounce on the subject opposite them in the test chamber. Jeff (Miles Teller), in for negligent homicide, seems okay with his first two female pairings but gets a bit on edge when seated across from a big tattooed skinhead (Nathan Jones, relishing the part with a feral nastiness). Hemsworth’s Steve is an odd duck with much up his sleeve, something of a merry puppet master of chaos playing mind games in his Bond-villain-esque hideaway. Not much of it gels; there’s too much goofy giddiness with lives at stake. The film is based on a short story by George Saunders, a humorist with a dark, sardonic wit, but Kosinski and his writers seem to only to grasp the satirical poke at at big pharma at its literal end. The result is an emotional-manipulation version of “The Island of Doctor Moreau” with the demented doctor drinking his own Kool-Aid and tap dancing across the sandy cove. (Tom Meek) On Netflix.