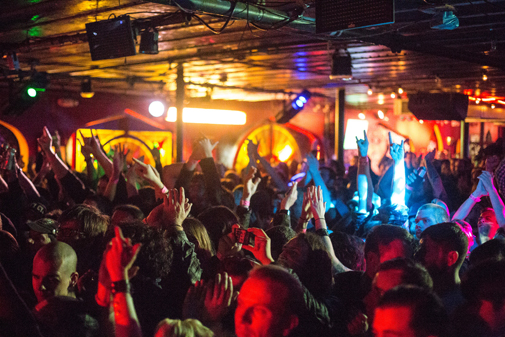 The Middle East nightclub complex in Central Square has been the backdrop for three incidents in the past two months. (Photo: digboston)

The Middle East nightclub drew a warning from the interim police commissioner Wednesday despite being found not responsible last week for three recent incidents involving unruly patrons, apparent substance abuse and violence on the streets outside. 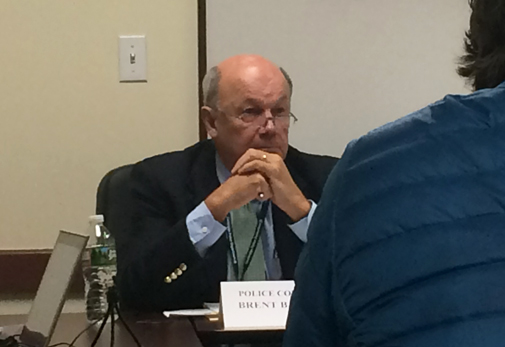 Brent B. Larrabee serves as a license commissioner during his months as interim police commissioner. (Photo: Marc Levy)

“We understand it’s a tough environment, a lot of people drinking and all that,” said Brent B. Larrabee, whose position also makes him one of three city license commissioners, to owners and managers of the Central Square restaurant and club complex. “But I don’t want to see your name come across my desk anymore. I mean that. That’s my statement to you.”

Police officers and people representing the Middle East crowded the tables in front of Larrabee and commission chairwoman Nicole Murati Ferrer (the third member, Fire Chief Gerald Reardon, was not present) to explain three incidents from within the past two months:

On Dec. 15, staff were suspected of over-serving an already drunken patron, who had to be taken to Cambridge Hospital when he collapsed, becoming “incoherent and unresponsive,” police said. The friend who accompanied him said he’d already downed three-quarters of a bottle of wine, but was served whisky at the Middle East’s bar at Massachusetts Avenue and Brookline Street – where police said they found the bartender “evasive” about whether the man had been his customer. Security staff, though, said they’d identified the man as being in another section of the club, and said he’d had been carried into the Corner Cafe only after experiencing a health problem.

The customer was seen dancing with his girlfriend in the upstairs club at 10 p.m., “having a good time, and didn’t seem intoxicated … He was fine at that point,” said the club’s security manager, Ashley Lord. “Twenty minutes later, he was just incoherent and couldn’t respond to anything. I remember his face. He was very pale, his eyes were obviously dilated and he couldn’t respond or talk at all.”

While Murati Ferrer said she couldn’t understand “why would someone lie about being served [alcohol] on the premises” – despite the obvious suggestion the customer could have been suffering from drug use – she acknowledged that it was “very clear based on the law that there was not sufficient evidence to find a violation.”

On Jan. 8, a Haverhill man was stabbed in his back, shoulder and forearm after a fight that began with other customers inside the club – at what security described as a “mostly under-21 show” that was “very calm” – escalated into violence when they left. The wounds weren’t life-threatening, and the man was released from a hospital the next day. After confirming that customers had been patted down upon entering and no weapons had been found or confiscated, the license commissioners found no violation.

On Feb. 3, a customer said he’d been punched by a security staffer after asking to see video of an earlier incident involving a friend. But his description of the man who punched him did not match up with anyone working at the club that night, and the commissioners found no violation by the club.

Club owners Joseph and Nabil Sater and their lawyer, Bernard Shadrawy, said they had acted on the request of the commission and made everyone on staff – about 60 people in all – get recertified on the training that helps prevent alcohol incidents, and were making additional improvements: hiring two to four more security staff, seeking city permission to add more outside lighting and meeting with police in hopes of ensuring more off-duty police officers could work security details at key times. They would also be doing more research into bands’ “prior engagements in order not to employ any bands that had serious incidents at other venues,” Shadrawy said.

Police could help with that, said Murati Ferrer, calling these incidents a “wakeup call” when combined with a number of people being pulled over on charges of driving under the influence saying they were coming from the Middle East.

“We would love to keep Central Square safe, and we’ve been keeping it safe for the past 40 years,” said Nabil Sater, noting the decades in which the clubs have been open without serious incident despite “maybe some weird energy in the air” underlying the recent problems.

Until its closing in July, the restaurant and Monroe a few steps away at 450 Massachusetts Ave. was identified as the source of troubles such as nonfatal shootings and massive street brawls. Monroe shut down after the License Commission, responding in late July to a series of violent incidents blamed largely on customers visiting from other cities, gave it a seven-day suspension and cut two crucial nightlife hours off the end of its business day.

On Wednesday, Larrabee – who arrived in January and is not in the running for a permanent placement as police commissioner – included visitors from out of town in his suspicions about the Middle East.

“We didn’t find any violations, but we have a lot of information here that your patrons and maybe some of your staff are involved in something. We think that goes right to the heart of what Nicole just said when she asked you who you were booking. You’re drawing some people that are maybe less than desirable,” Larrabee told the Middle East owners and managers.

“I’ve only been here five weeks, and that’s three violations that you’re alleged, right? That’s a lot,” he said.

“I’ve spent a lot of time at your restaurant. I don’t want to be there anymore,” Larrabee said.