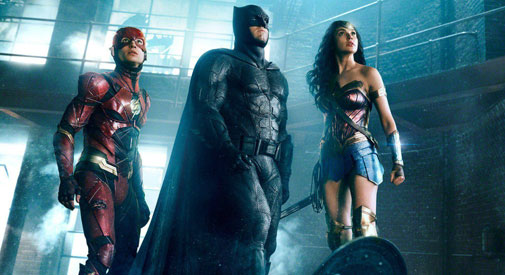 The new super adventure inspirationally labeled “Justice League” is an extremely crowded affair littered with jumps in plot, and things end up exactly as one might expect: in a giant CGI beatdown with an arch-villain. Still, after the turgid “Batman v Superman” it’s good to see Zach Snyder fit a lot into a neat two hours, and finally do justice to the floundering DC Comics franchise. (An encouraging trend, considering the sharp and fun “Wonder Woman” directed by Patty Jenkins.)

Things pick up in the immediate aftermath of “BvS,” with Superman (Henry Cavill) still dead or comatose and his mortal darling Lois Lane (Amy Adams) burdened by grief and suffering reporter’s block. That leaves fellow “Leaguers” Wonder Woman (Gal Gadot) and Batman (Ben Affleck) to fend for the world as alien ghouls with dragonfly wings descend upon the planet in slow strokes, kidnapping folks. Batman (what is it with these movies where Christian Bale and Affleck talk in constipated growls from behind the mask, but are smoothly eloquent in Bruce Wayne mode?) deduces astutely that the nasty bug-beings are part of a bigger plot – to unite the three Mother Boxes (like the Infinity Gems over in the Marvel Universe) and give an entity known as Steppenwolf – not to be confused with the band founded by John Kay (“Born to be Wild”) or the novel by the tortured German novelist, Hermann Hesse – the ultimate power to terraform the earth and wipe out humankind.

Yeah, we’ve been here before (“Man of Steel”?), but writers Joss Whedon, who wrote and directed “The Avengers” flicks and Chris Terrio, Affleck’s scribe on “Argo,” mine a rich potpourri of personalities for all they’re worth, including some nicely flirty exchanges between Gadot’s amazon warrior and Affleck’s wealthy playboy. The real fun is carried in by Ezra Miller as The Flash, a young man with superpowers, social anxieties and a need to carbo load (running at the speed of sound can really burn up your reserves) who’s never really “done battle” before. He’s the kind of wet-behind-the-ears, socially awkward, tongue-in-cheek spark plug that provides much-needed comic relief, the same way the young Spider-Man (Tom Holland) did in “Captain America: Civil War” – and an ounce of gee-whiz uncertainty can go a long way, especially when its issuer can toss a car across a parking lot.

The Flash is just one of the new players. Joining him is the half-human, half-bionic entity referred to as Cyborg (Ray Fisher), a downer of a dude with a bit of a chip on (in?) his shoulder, and the merman, Aquaman (Jason Momoa), who in this incarnation is a sculpted, tattooed hipster (a far cry from the blond-haired, square-jawed, do-right in the “Super Friends” cartoons) not so interested in the saving the world. The latter two don’t make as big of a splash as the others in this chapter, but they – ostensibly like The Flash – are due to get their own spinoff at some point.

When the galactic gump finally hits the super-fan, Steppenwolf, voiced by Ciarán Hinds, proves a step up (pun slightly intended) from the growling CGI mass in “BvS” known as Doomsday. Besides that film’s tedious lead-up to the Batman-Superman brawl, their postbellum union to take down the unimaginative, green-screen rendered amalgam was an armor-piercing strike that addled what could have been something more nimble and rewarding. Steppenwolf, looking like a Roman or Norse god of war, is more, but barely. For plot’s sake, you bite, but essentially he’s the McGuffin to build the League around. Like me, you may yawn and think how nice it would be if someone would dial in Loki, Hela or even Jeff Goldblum’s droll Grandmaster from “Thor: Ragnarok” – I know: wrong universe, film and comics. But still.

In the end, Snyder has righted the boat; now all he needs to do is to find a villain worthy of his stacked team.