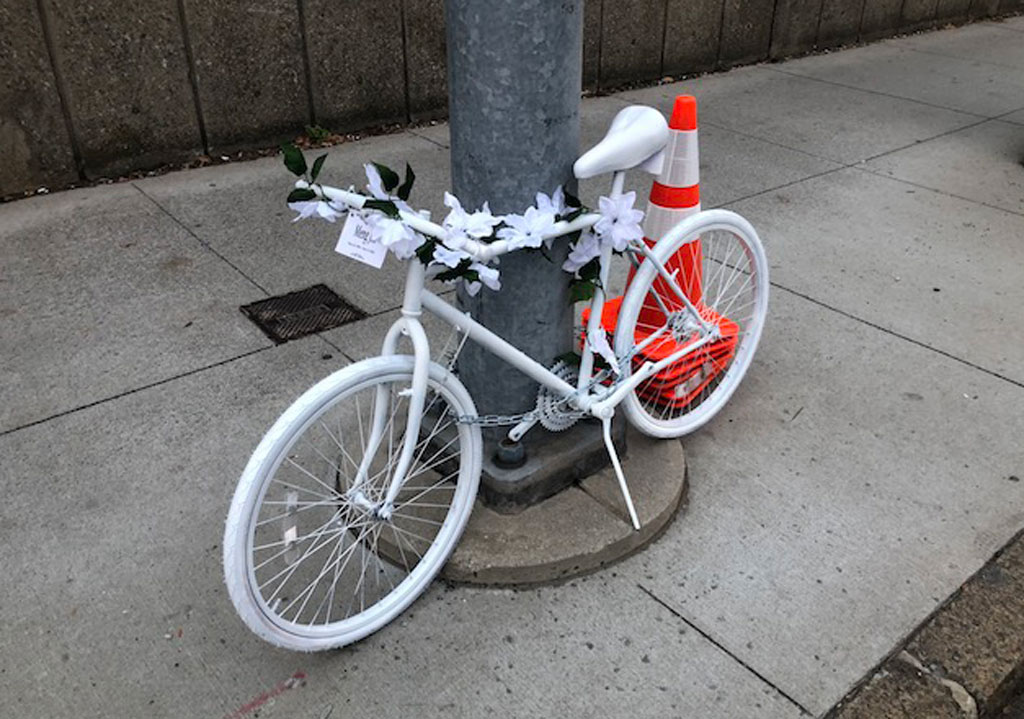 A ghost bike at Route 28 and Museum Way honors Meng Jin, a bicyclist who died there Nov. 9. City councillors want to know more about the incident. (Photo: Mike Connolly)

Will the city make its development standards match the climate change crisis?

City Council, 5:30 p.m. Monday. A number of substantial items are on the agenda, including the creation of a 25-member Climate Resilience Zoning Task Force in response to “green factor” zoning that was proposed by North Cambridge residents Mike Nakagawa and Doug Brown over the summer but not enacted – and Nakagawa and Brown are on the task force. Also from the city manager are revisions to a city surveillance ordinance and, from the Arts Council, a street performer ordinance that, incredibly, seeks to trim a busker fee instead of ending it as called for by the council in June. Councillors, meanwhile, are looking for answers about a Nov. 9 bicyclist death near the Museum of Science and about a woman’s 2016 death outside a Cambridge Health Alliance hospital emergency room and plan to join with Somerville and Boston to talk about affordable housing.

What is the city going to do about illegal Airbnb operators?

Public Safety Committee, 1 to 3 p.m. Tuesday. The city’s Airbnb law went into effect April 1, setting rules on who could use property for short-term rentals and requiring them to register, but it’s widely known that a flood of illegally renting continues. This committee run by city councillor Craig Kelley vows to look at the how the law’s working and at possible new policies and “new legal proceedings against illegal [short-term rental] operators or platforms.”

How did Cambridge Public Schools students do on the MCAS?

School Committee, 6 p.m. Tuesday. Among other agenda items, data from the year’s MCAS standardized testing are given a presentation by district staff.