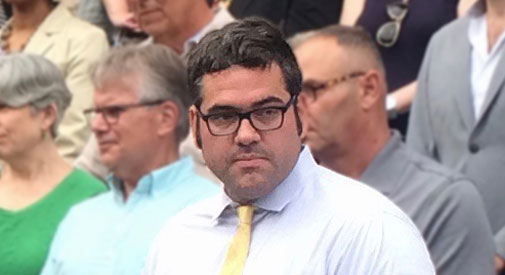 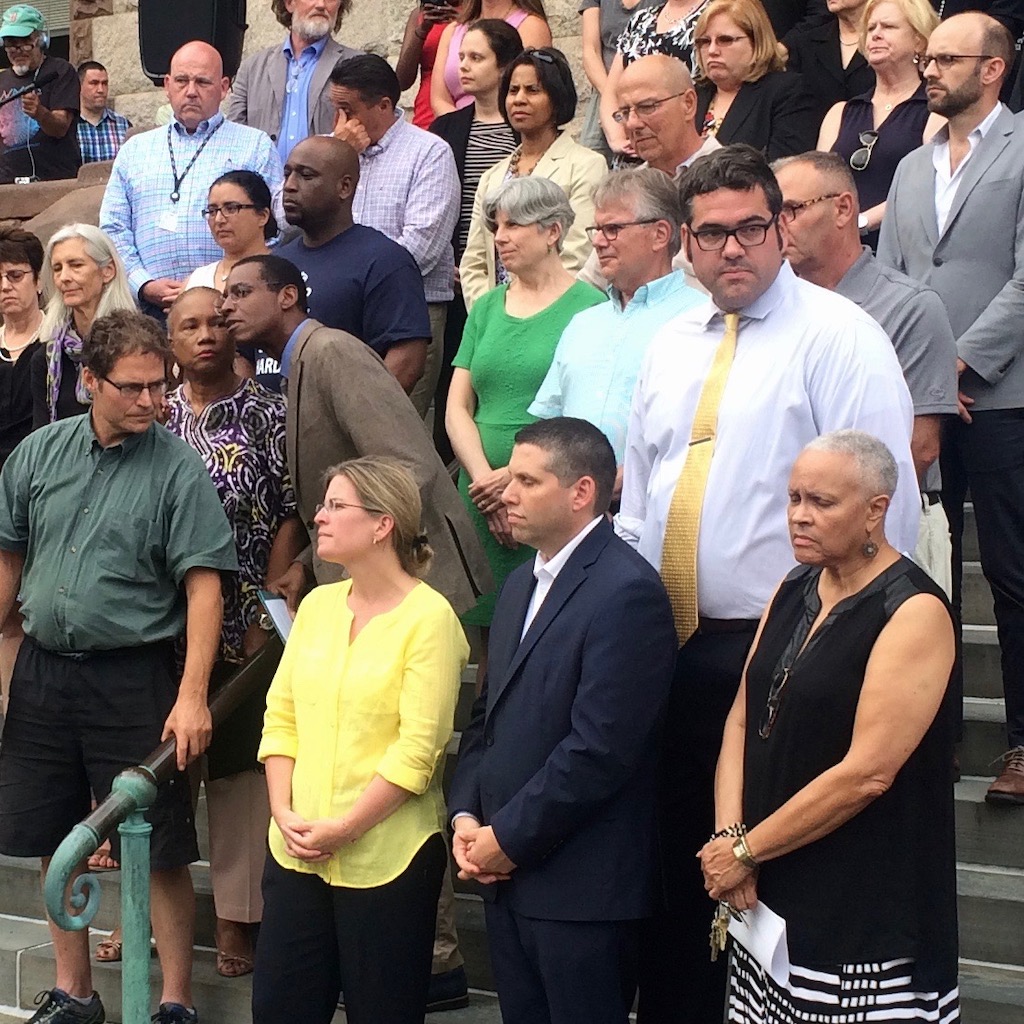 A “Housing Choices” bill backed by Gov. Charlie Baker was the most hotly argued topic at Monday’s meeting of the City Council, yet when an order about it failed on a 4-4-0 vote after an hour of discussion (preceded by well over an hour of public comment), nothing had changed.

The order was about urging state Rep. Mike Connolly to vote for the Baker bill, and Connolly was clear about his dislike for the bill before the failed vote and made his continuing disdain for it clear in a tweet shortly afterward. “Congratulations,” he said to the council via social media. “In just one evening, you’ve spent more time openly debating [the bill] than the state Legislature spent openly debating it the past year.”

Congratulations to the #CambMa City Council! In just one evening, you’ve spent more time openly debating @CharlieBakerMA’s Housing Choices bill than the state legislature spent openly debating it the past year! More info about this bill is here on my blog: https://t.co/40RFtlSOqW pic.twitter.com/KPiCP5u28H

The Baker bill remains in the House Ways & Means Committee; if it goes to a late-term so-called “informal session,” a single opponent such as Connolly can stop its approval and send it back to the full House to try again next year.

The author of the Cambridge policy order, councillor E. Denise Simmons, said she was trying merely to “urge our delegation to the State House to do what they can to support this bill,” with the only holdout mentioned Monday being Connolly.

The bill could pave the way for more housing to be built statewide, which could take some pressure off the intense and costly real estate markets in Cambridge, Somerville and Boston. “How do we make Cambridge affordable so people could not only stay, but come back?” Simmons said. “We have lost so many.”

The lack of protections to keep tenants in that housing was Connolly’s priority, though.

Change in voting for development

Baker’s bill seeks to make it easier for Massachusetts cities and towns to pass zoning changes and special permits for housing development by lowering vote requirements to simple majorities rather than two-thirds majorities. But among Connolly’s concerns about the bill was the “one-way” nature of the voting change, which would apply to denser development but not to “inclusionary” zoning that created affordable housing.

In addition, Connolly said he was disturbed by House Speaker Robert DeLeo’s blunt, public admission that state representatives wouldn’t be able to suggest changes to the bill, and why:

“I’ve had some initial meetings with the folks at [the Massachusetts Municipal Association], [NAIOP Massachusetts, the Commercial Real Estate Development Association] and some of the other building contractors and whatnot, and I can tell you with NAIOP and the MMA in particular, they’ve made an agreement that the bill that was filed by the governor is the bill that they are supporting, and that they will not support on either side any idea about any amendments to that legislation.”

“I remember reading those words at my desk and being shocked,” Connolly said. “Here I am, an elected member of the House of Representatives, and I am being told that there will be no opportunity for myself or other legislators to consider amendments … because an agreement was struck between commercial real estate lobbyists and municipal lobbyists.”

He also observed that Cambridge and Somerville (part of which Connolly also represents on Beacon Hill), two of the densest cities in the nation and aggressive about building market-rate and affordable housing, were being lumped in with underused suburban and rural communities in a “one-size-fits-all” solution while Boston is excluded from the Baker bill. (The bill modifies a zoning enabling act for the state known as 40A; Boston has its own zoning enabling act.)

Another objection from Connolly was that the vote would take place in an “informal session” where there would be few legislators and no debate or roll call votes allowed. But Tim Toomey, the city councillor who held Connolly’s seat on Beacon Hill for 24 years before a 2016 primary, said passing legislation in informal session “has happened quite a bit in the past,” and councillor Alanna Mallon said she’d been in touch with Cambridge state Rep. Marjorie Decker, who also considered it a non-issue. Decker herself was counting on a bill about flame retardants passing in a last-minute informal session so she didn’t have to see four years of work start over again in the 2019 term, Mallon said.

The real sticking point was the bill going forward without the tenant protections that had been sidelined separately over the legislative term. “Why was virtually every progressive priority for housing affordability taken off the table at the end of 2017-18 formal legislative session?” Connolly asked. “Apparently, because corporate real estate lobbyists said so.”

One tool in the toolbox 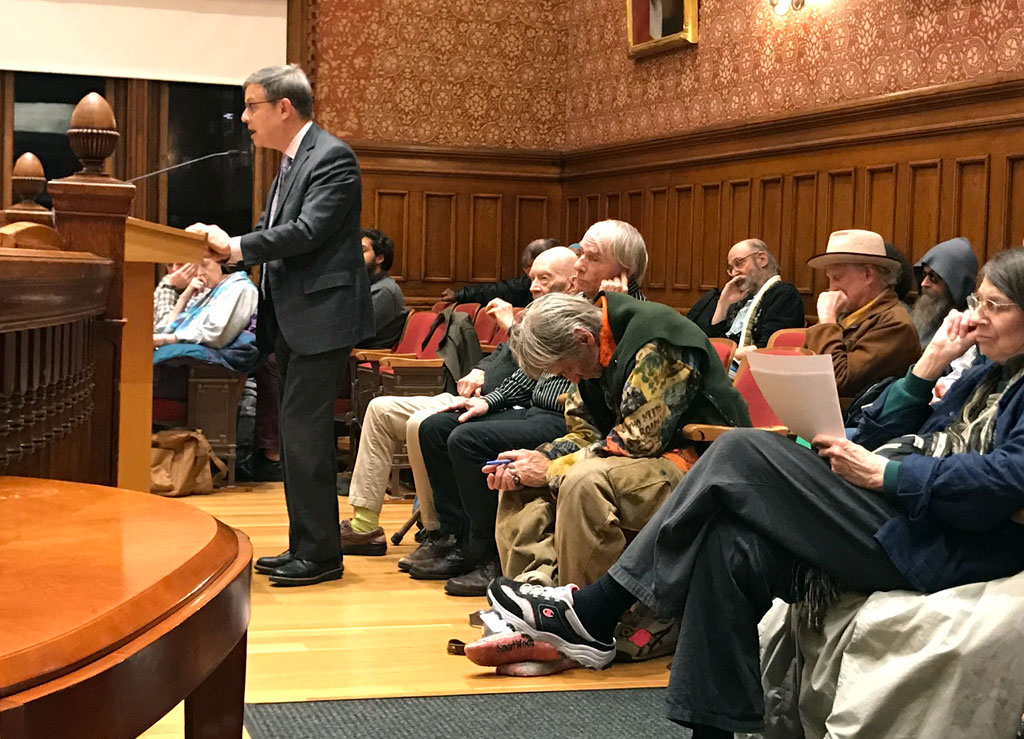 Simmons and other supporters of the policy order and Baker bill thought of it a different way.

“I agree this is limited in scope,” Simmons said of the state bill. “But I don’t believe anyone has suggested that it is an be-all, end-all answer. What it would do is provide us with one or more tools for cities like Cambridge to use to help chip away at our affordable housing crisis. As I and many other affordable housing advocates have stated for years, there is no silver bullet. We need to approach this from numerous angles, with a cocktail of remedies. [This] would be another tool in the toolbox.”

There were some prominent supporters of the policy order and bill during public comment. Among the roughly two dozen speakers, a half-dozen spoke in favor, including Marc Draisen, executive director of the Metropolitan Area Planning Council; and from the Cambridge Economic Opportunity Committee, executive director Tina Alu and her predecessor, Elaine DeRosa.

“It’s unfortunate that what went out to the public is that this was all something that only for-profit developers cared about,” said Mayor Marc McGovern, citing the support also of the Citizens’ Housing And Planning Association; local nonprofit developers Homeowners Rehab and Just-A-Start; the Cambridge Housing Authority; the Massachusetts Smart Growth Alliance; and the Environmental League of Massachusetts.

Not without tenant protections

Councillor Quinton Zondervan wasn’t impressed, and listed some affordable housing groups who had not endorsed the bill, such as Boston’s City Life/Vida Urbana and The Right to the City Alliance.

“These are the on-the-street tenants’ housing activists. Why do they not support this?” Zondervan said. “What the legislation does is they pass a major housing bill and then we come back in the session and say, ‘Now we get to do tenant protections?’ ‘Oh, we already did housing. We’re done. We’re not coming back to that for years.’ They did that to us on a few years ago on renewable energy.”

Even in Cambridge, every tenant protection proposed, such as a right of first refusal, condo conversion fee or relocation assistance ordinance, has been beaten back by small-scale property owners or put off by resistance from city staff; councillor Sumbul Siddiqui is set to lead a mayor’s blue-ribbon committee launching in January to find tenant protections for the council to adopt.

Ultimately, he argued that it was pointless to re-create the Legislature’s debate in council chambers – and he pointed out several times Connolly’s bedrock rejection of a Baker bill that didn’t come with action on tenant protections. Though Zondervan has worked with Connolly as far back as co-writing Cambridge’s net zero emissions zoning in 2013, his certainty in this case had an even more obvious source: Connolly had just hours earlier made clear how unlikely a change of mind would be in a 3,370-word blog post referring to the bill as having “Inherent Inequity.”

“We could debate this all night, but the fact of the matter is that he’s not going to withdraw his objection,” Zondervan said of Connolly.

In the final council vote, Simmons, McGovern, Mallon and Toomey were in favor of the order and bill; Zondervan, Siddiqui, Dennis Carlone and Craig Kelley were opposed. Jan Devereux was not at the meeting.

This post was updated Dec. 18, 2018, to describe some issues as being of concern or interest to state Rep. Mike Connolly, rather than being things he outright opposed.