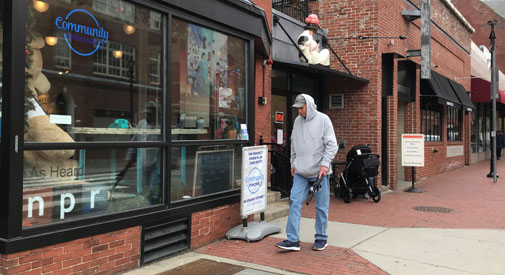 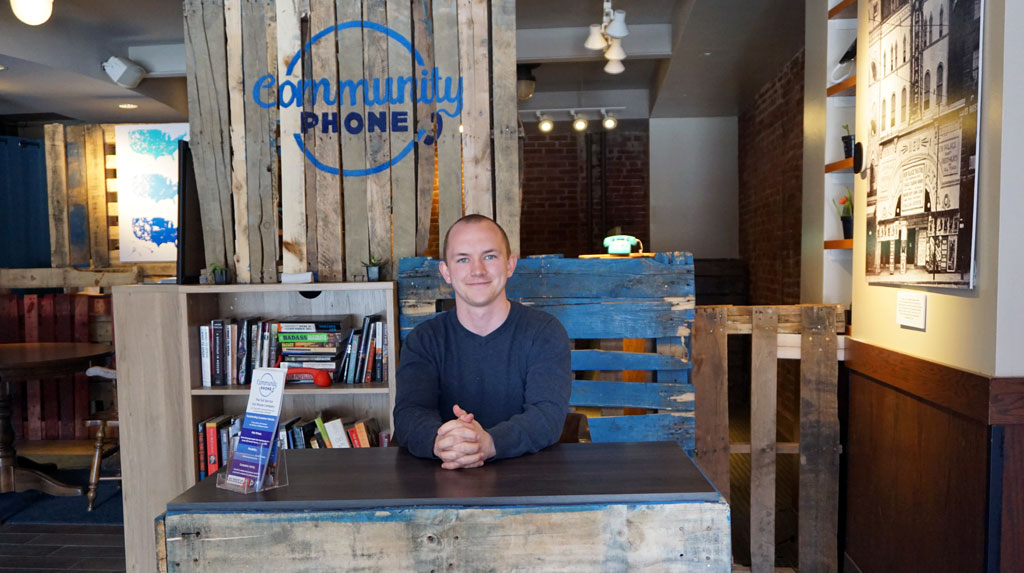 Community Phone, a small phone service provider, has been in pop-up digs in the heart of Harvard Square for three months now, and may be out on the street by midsummer. That might be nerve-racking for proprietors with tightly focused strategic plans and warehoused inventory; the youthful founders of this startup aren’t worried at all. They’re month to month in the old Starbucks coffee shop on Church Street and, like the low-cost cellular plans they offer and tailor to customers’ needs, are adaptable, lean and flexible.

The company, incorporated more than a year ago by James Graham and John LaGue, 20-something Wisconsinites, began hawking its product on the street, but with help from the Harvard Business Square Association and executive director Denise Jillson, reached an agreement with 31 Church St. landlord Janet Cahaly. She had her own motivation: not having a storefront vacant for a long time before finding a longer-term commercial tenant that would pay market rates.“Landlords really do want to do the right thing,” Jillson said.

The Starbucks closed in November, while the Cambridge Artists Cooperative down the street announced in April it can no longer afford to stay in Harvard Square and will be gone by June 30. A basement-level Fire + Ice restaurant that closed in September 2016 has yet to be filled – though its signs are still up. The clothing store LF closed on Church Street, telling The Harvard Crimson that “Harvard Square is not a shopping destination anymore,” while keeping a Newbury Street location in Boston. 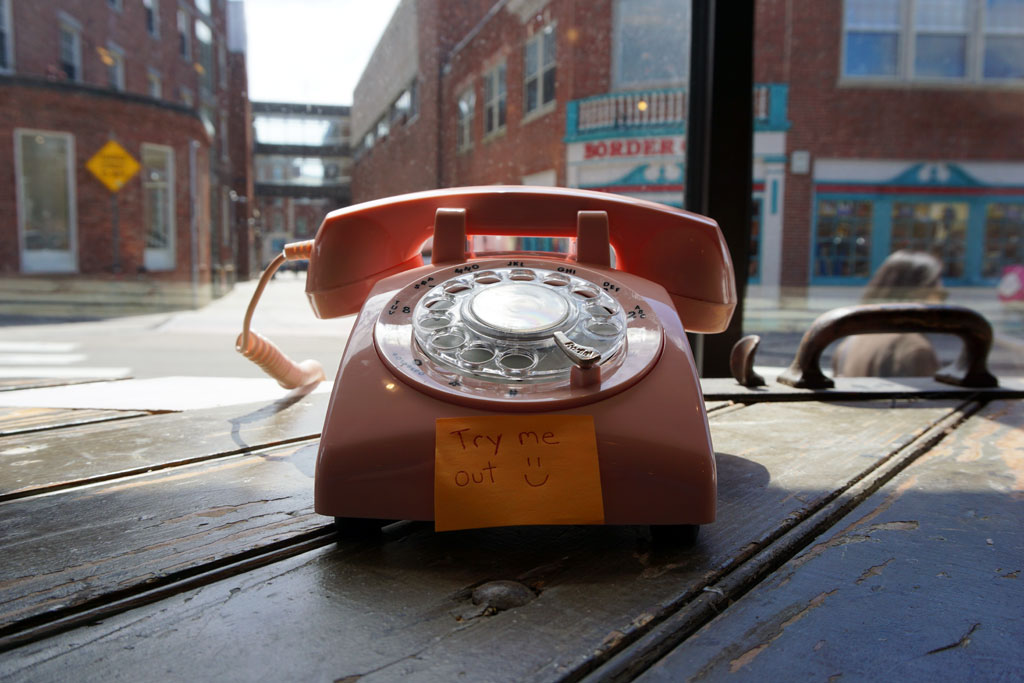 Community Phone, whose customers have an average age around 58, has installed a rotary phone to help test customers’ mobile phones. (Photo: Tom Meek)

Community Phone buys service wholesale from cellular networks such as AT&T and Sprint and passes savings on to end users. What’s special is the customer service, LaGue said. “There’s no waiting on a phone or in a long in-store queue. You just walk in and talk to one of us,” he said, literally helping an octogenarian with a cane enter to ask a question. “Plus it’s 100 percent hassle free. You don’t have to do anything – we take care of moving your plan and setting you up.”

The space is inviting, spartan yet cozy, with crate-like barriers and a café ambiance. Up front, a giant stuffed bear – nearly twice the size of an adult – greets customers, and old Starbucks Christmas decorations still frame the large window pane. The store keeps a classic rotary-dial phone (operating off the cellular network) on hand to dial the mobiles they set up, a way to test a plan and phone activations.

Community Phone’s primary aim is to make cellphone use affordable and simple. “Many of our customers are people over 55 who aren’t tech savvy,” and the average customer age is around 58, LaGue said. The other side of the customer base, now a few hundred thousand people, is small businesses and students who aren’t on family plans. The company offers flip phones in the $20 range, but also iPhones and other high-end smartphones with plans as low as $15 for unlimited calls and texting.

The real killer is data costs; LaGue cited an example of couple with a $240 monthly cellular bill. “They had a big data plan but hardly used much of it.” By dialing back the data plan and creating a family account, LaGue was able to cut their costs to less than $40 monthly. There are no contracts with Community Phone – like the company’s housing arrangement, it’s all month to month – and should it disappear tomorrow, the network providers would take over the service and accounts, though costs would likely increase by a small percent.

The company is looking to expand and offer new products, which likely means getting venture funding, LaGue said. For now, it remains on Church Street. “We are actively looking for a new location in Harvard Square, Somerville or possibly Back Bay. We are still trying to find the best way to help the most amount of people, and have several exciting partnerships in the works. No matter what, we’ll be available 24/7 over the phone and online as we always have been for our members in over 30 other states,” he said. 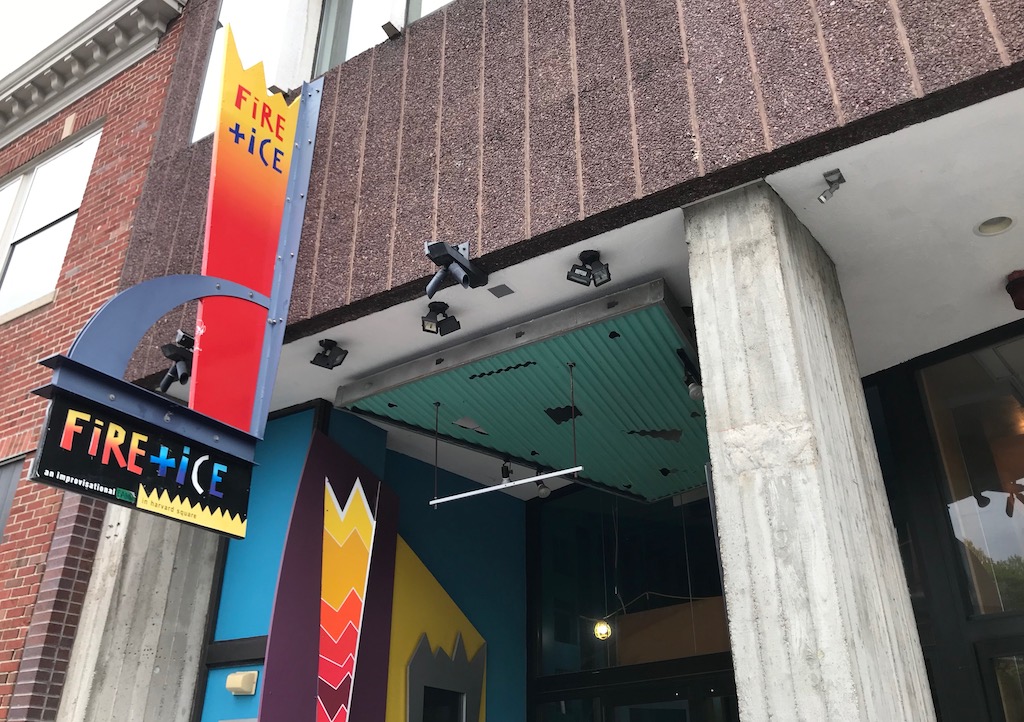 The Fire + Ice restaurant space is still empty on Church Street after more than 2.5 years, though its signs haven’t been taken down. (Photo: Marc Levy)

As small and local businesses get forced out of Harvard Square due to development and rent increases – including the ouster of Crema Cafe for the Bluestone Lane coffee chain despite the Hidden Sweets space being empty next door since December 2016 – Jillson looks to pop-ups such as Community Phone as success stories. She cited the recent Lululemon sportswear pop up in the historic Brattle Building at 1-8 Brattle St., recently acquired by Asana Partners, as well as the art pop-ups in the Abbot Buildings now owned by Regency Centers and the yard sale HSBA held for its departing companies in the old Urban Outfitters space. Proceeds from the sale (about $4,000, according to Jillson) went to benefit the Harvard Square Homeless Shelter. (There are no pop-ups in the Abbot Buildings or Brattle building as construction gets underway.)

City councillor Sumbul Siddiqui, who has been focused on the problem of unused retail space in her Economic Development Committee, called pop-ups “a unique way to keep a vacant storefront active, even if in the short term,” especially as some vacancies stretch into the years – sometimes because owners get tax write-offs that eliminate their incentive to find a long-term lease. “The rent in Harvard Square is outrageous, and I think many city councillors have said as much that we want to change that. But we’re very limited in what we can do,” she said. There’s no such thing as the ability to mandate rent, and no commercial rent control, and city staff consider the commercial vacancy rate of 2.2 percent to be “really healthy.”

A good use for pop-ups is to test a market on the way to becoming a full-fledged, bricks-and-mortar business, like Amanda Escamilla’s Tex Mex Eats pop-up in the former Tupelo space at 1193 Cambridge St., near Inman Square. “It’s a campaign to raise capital for a permanent kitchen in the Cambridge/Somerville area,” Escamilla told boston.com.

But they have a chance to exist, in part, because the local economy is bad.

“In the Cambridge context, and specifically around Harvard Square, empty storefronts are becoming an enduring feature. Rising rent prices, reduced foot traffic and increased online shopping, among other reasons, contribute to this phenomenon. Pop-up businesses provide an opportunity for engaged storefronts,” Skeadas said, echoing Siddiqui, “albeit short-term ones.”