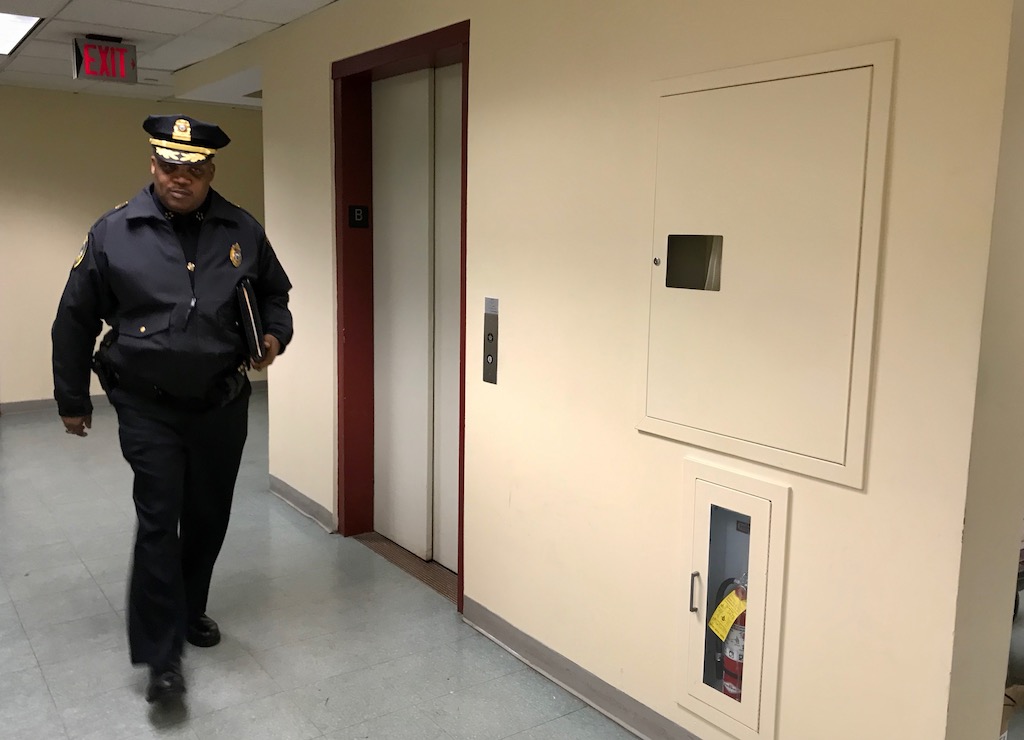 Although lionized as a champion of civil liberties for helping craft Cambridge’s new surveillance ordinance, police Commissioner Branville G. Bard Jr. is also under examination for possibly breaking state law and violating citizens’ civil liberties with a ruling and punishment decided as a member of the city’s License Commission.

Bard, who makes up one-third of the commission alongside its chairwoman and the acting fire chief, decided Nov. 7 to punish Kim Courtney, a co-owner of the UpperWest wine bar and charcuterie, under various statutes concerning threats and intimidation of city officials. But the people supposedly threatened by Courtney – fire inspectors who’d visited the North Cambridge business Sept. 29, and whose visit was filmed by Courtney and partner Xavier Dietrich – told the commission that they never considered her comments to be physical threats.

“I did not take it as a physical threat. [Maybe] she wanted to get me in trouble somehow with my position,” Deputy Chief Peter Donovan testified during the November commission hearing, followed by Capt. Philip Arsenault saying: “I took that to mean … that we would get in trouble for being wrong and harassing her.”

That didn’t stop Bard from joining in a unanimous finding of guilty for Courtney and issuing a three-day suspension for the business.

The local chapter of the American Civil Liberties Union, provided with audio of the meeting and documentation from the commission’s files, finds cause for alarm in Bard’s ruling.

“Residents have a constitutional right of free speech, and that includes the right to object to how public employees are carrying out their duties. Efforts by public officials to intimidate them out of exercising that right, by imposing license suspensions for past expressions of concern, may well violate Massachusetts civil rights law,” Bourquin said.

It was just over five months earlier that the ACLU filed a lawsuit against the City of Cambridge for its policy of charging protest organizers for public safety, a practice it said “deters political participation” in violation of the First Amendment to the U.S. Constitution. The city settled with the organization and its plaintiffs the same month, with City Manager Louis A. DePasquale saying the city is “deeply committed to supporting the public’s right to freely express their views.”

Bard was asked immediately after his verdict Nov. 7 how he justified finding Courtney guilty of “threats” after hearing the fire inspectors’ testimony, since the statutes cited by the commission involved threats of violence. He was also asked what his interpretation of threatening behavior meant for other people in Cambridge.

He twice refused to answer, deferring by saying to call his office to set up an appointment. When his office was contacted the next day for an appointment, the response instead came from Jeremy Warnick, director of communications and media relations for Cambridge police, who said Bard would not reply – that the police commissioner would talk about License Commission issues only at the commission hearings. Warnick also said Bard would not answer questions at all about his ruling’s impact on free speech standards in the city and whether he had criminalized people’s intentions to file job complaints or simply say someone would “regret” an action.

Warnick then stopped answering questions on the topic altogether, revealing when pressed that responsibility for addressing the topic had shifted without warning to Lee Gianetti, director of communications and community relations for city government.

Bard, previously of Philadelphia, was appointed in July 2017 to a three-year contract as police commissioner. He was one of five semifinalists for the position in spring of last year, but by the finalist stage that summer one dropped out, leaving Bard the sole candidate. At the public’s only meeting with Bard as a candidate, he delivered a prepared speech and gave prepared answers to a handful of previously vetted and accepted questions provided him in advance. He was whisked out the door at the end of the event without a meet-and-greet, and he was asked not to answer questions from the media unless he was selected. Still, at that June event he stressed the importance of maintaining and improving the “legitimacy” of the police department by increasing accountability and transparency.

He since played a major role in writing a city law requiring community control over police surveillance and its technologies. It was passed a week ago by the City Council after a two-year process, with Bard’s involvement drawing praise from the ACLU’s Kade Crockford, who worked with the city on the ordinance, and from officials including Mayor Marc McGovern.

“The vision of community policing under police Commissioner Bard has brought great gains, setting the Cambridge Police Department as a model for departments across the nation,” McGovern said during his State of the City address on Wednesday. The surveillance law “protecting our civil rights [is a] milestone [that] would not have been possible without the active and continued support of Commissioner Bard.”

In the video made by Dietrich of the fire inspectors’ surprise inspection of the wine bar on a busy Saturday night in September, Courtney is heard telling them, “You guys are going to regret behaving this way, this is not how this works.” The remark was followed by several minutes of undramatic exchange of names and contact information that ended with Courtney saying “thanks” and one of the departing officials saying, “Okay, good luck with everything.”

During their testimony Nov. 7, each of the fire inspectors recalled the events of that night for the commissioners. A viewing of the video shows that each of their testimonies was inaccurate in the same way: Each misquoted Courtney identically and suggested her comments were the final words uttered, failing to describe what took place after.

The fire inspectors mentioned the video prominently during their testimony, and commission chairwoman Nicole Murati Ferrer asked Courtney and Dietrich if they were submitting the video for evidence – they were not. The issue wasn’t explored further.

Like the other commissioners, Bard never asked to see the video before passing judgment.

Cambridge Day has filed a complaint with the Police Review & Advisory Board, a citizens organization that investigates complaints against officers, regarding Bard’s actions.