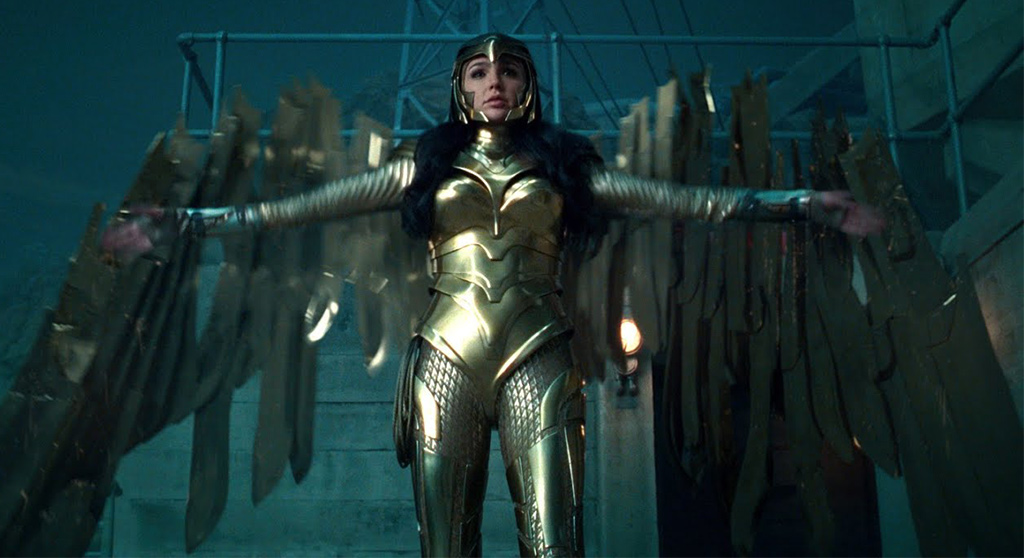 Patty Jenkins’ highly anticipated and massively delayed (thanks, Covid) follow-up to her 2017 “Wonder Woman” origin story is something of a letdown – less lithe, less focused and somewhat gummy. Over in the Marvel Universe, which seems to do these things more adroitly, Wonder Woman’s male counterpart, Captain America, kicked off kinda rangy with “The First Avenger” (2011), too square-jawed, self righteous and neatly pat, but gained footing through trial and grit when pushed in “Winter Soldier” (2014) and “Civil War” (2016, so ironic, it being Trump’s election year). That’s not the case here. The DC Universe as a matter of operating procedure guns for over-the-top when less is more. Just see “Aquaman,” (2018) “Justice League,” (2017) or “Batman v Superman” (2016) for illumination.

This “Wonder Woman 1984” checks in at a wondrous two and a half hours plus, and it doesn’t truly feel that long until it rounds the final bend … for the third and fourth time. We catch up with doe-eyed Amazonian goddess Diana (Gal Gadot) doing time as an archeologist with a nerdy coworker named Barbara Minerva (Kristin Wiig, of SNL and “Bridesmaids”) at the Smithsonian; in gold tiara and red, white and blue attire, she takes down random creeps here and there. Now that it’s 1984 (hello George Orwell) her beloved mortal mate, Steve Trevor (Chris Pine), has passed, but when as Wonder Woman she thwarts a jewelry store heist, the recovered loot includes an antiquity known as the Dreamstone that will grant the possessor their wish. Diana’s brings a cost: Her super powers ebb, and when Barbara gets chance at the stone, she wishes to be like Diana.

Where things go from there is a ramshackle meander including something of a “Raiders of the Lost Ark” takedown of a military caravan, a #MeToo kick in which Diana and an enhanced Barbara give the same lech his due, and then there’s Maxwell Lord (“Game of Thrones” standout Pedro Pascal, who actually played in a 2011 “Wonder Woman” TV film that no one saw) as a TV personality and something of a Washington manipulator who gets his hands on the stone and becomes the arch villain. He’s something like Lex Luther fused with Donald Trump, with a small, caring Grinch heart awaiting the right stimulus. The more thrilling offset is Barbara, who morphs into the Cheetah and has more power than Diana. While this makes for a great super clash with cool FX and explosions, when Wiig shows up as the lowliest of all the apex predators on the Serengeti, she looks like something that escaped from the 2019 “Cats” debacle – and it’s hard to get over it. Also, Jenkins chose to shoot these scenes tight on faces, as if each actor was in their own separate green screen set. It lacks choreography and cohesion, which saps the action of energy.

Gadot, worthy of the role, stays in character and above the foibles, projecting compassion and magnanimity while still a goddess warrior. The disappointment here is Wiig. You’ve read about the two actresses bonding and making fun, entertaining YouTube comedy bits promoting the film, and we all know of SNL cast members’ comedic skill. But after an hour in, that’s all dried up, and Wiig is relegated to a two-dimensional shell of the geek who could be a god for a day. Chris Pine, like Gadot, holds tight. The two have solid chemistry, though I wished they let him wear something other than a stretched-out T-shirt that looks like the target of a fabric conditioner ad (you know that clueless, stretched-out, sagging neck guy on a date –  who wears a T-shirt to a sit-down meal out, anyhow?). They’re the reason to see “Wonder Woman 1984.” (Maybe that “Cats” spectacle, too.) Given all the release delays, it’s fitting that the film landed in 2020: We all know 2021 has to be better. There’s a lot to shut the door on, and this can be added to the list. There film does pack one final treat. I won’t say more, but do stay past the credits.