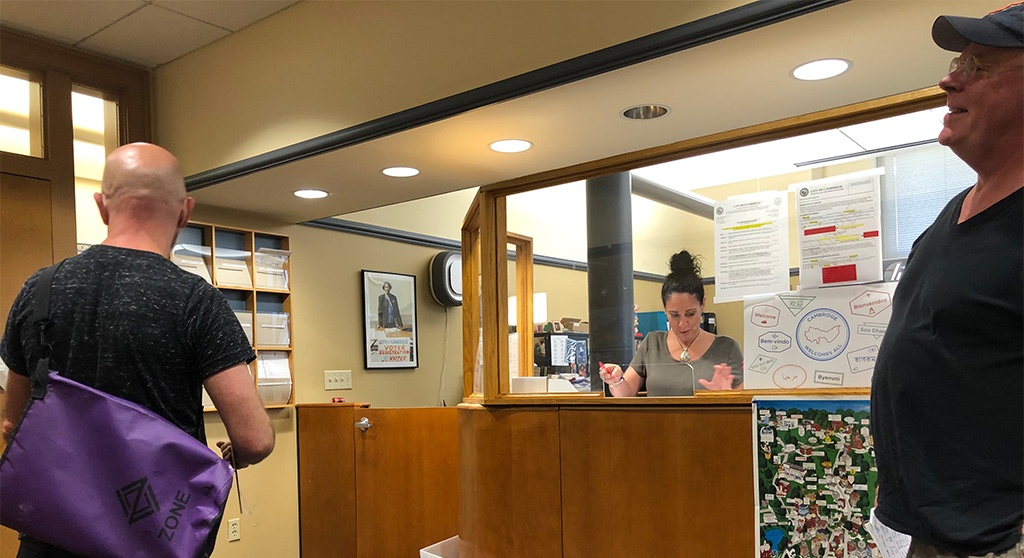 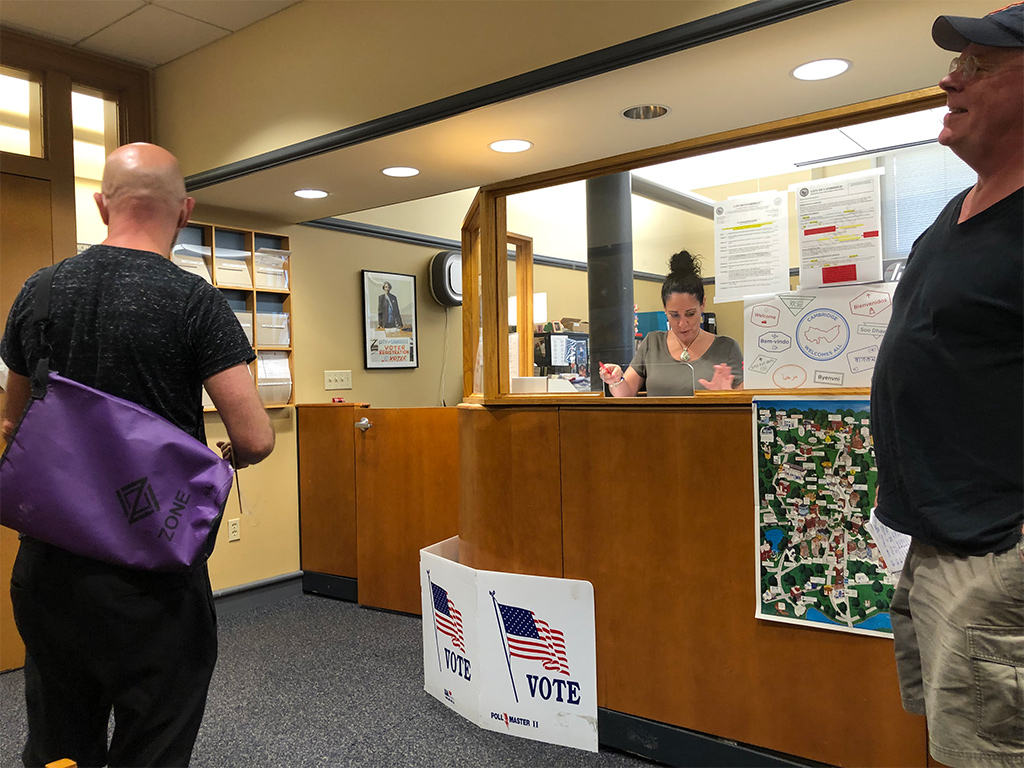 Ilan Levy, left, drops off signatures Monday for a City Council run with 10 minutes until the deadline. Politics watcher Robert Winters is at right.

As the clock ticked toward the 5 p.m. Monday deadline to submit municipal election nomination signatures, Election Commission staff gathered to determine the size of the Nov. 2 ballot – with some eleventh-hour drama from returning City Council challenger Ilan Levy, who dropped off signatures with 10 minutes to go, and School Committee member David Weinstein, who came in with seven minutes to go.

As the deadline passed, staff determined that the ballot will hold 19 council candidates competing for nine seats and nine School Committee candidates vying for six seats.

That’s a slight decrease from 2019, when 22 and 11 candidates were on the ballot for the council and committee, respectively. Both races have one seat being left vacant by an incumbent, guaranteeing a new face on each panel.

For the council, 19 of the 20 who took out nomination papers secured the minimum 50 certified signatures. Roy Ribitzky, a first-time candidate, was five signatures short.

Other new candidates include Dana Bullister, Robert Eckstut, Tonia Hicks, Joe McGuirk, Frantz Pierre and Theodora Skeadas. Levy took out nomination papers July 30 for what will be his fourth time running. Gregg Moree will run for the eighth time. Also returning from 2019 campaigns are candidates Burhan Azeem and Nicola Williams, and Paul Toner, who ran in 2017.

Craig Kelley, who was first elected to the council in 2005 and lost his run for an eighth in 2019, had talked about running this year to get a seat back, several people have said. Ultimately he did not submit signatures to run again.

Kelley, who said he had started a small consulting business, discussed the decision in an email the next Wednesday. “For the first time since 2003, my name will not be on the Cambridge City Council ballot. My decision not to run this year was not an easy one, nor does it signal my permanent retirement from local politics, but for me, like so many of us, the last two years have been a real roller coaster and right now I’m focusing on how to better understand and impact the world as a regular citizen,” Kelley wrote. “It is going to be strange to be on the sidelines during the upcoming election season … but, for now, it’s time for me to further explore and learn from the wider world outside of Cambridge and to see what useful things I can try to bring back home.”

At least one new face is guaranteed for the six-person committee because Manikka Bowman, a three-term member and current vice chair, announced in July that she will not seek election and instead focus on spending time with her children. She “will consider running for public office in the future,” she said in the Cambridge Chronicle.

Kathleen Kelly, who served two terms but did not run for reelection in 2019, took out nomination papers but did not submit signatures.

The number of certified signatures are provisional. The Board of Election Commissioners will officially certify all signatures ahead of the election on Nov. 2.