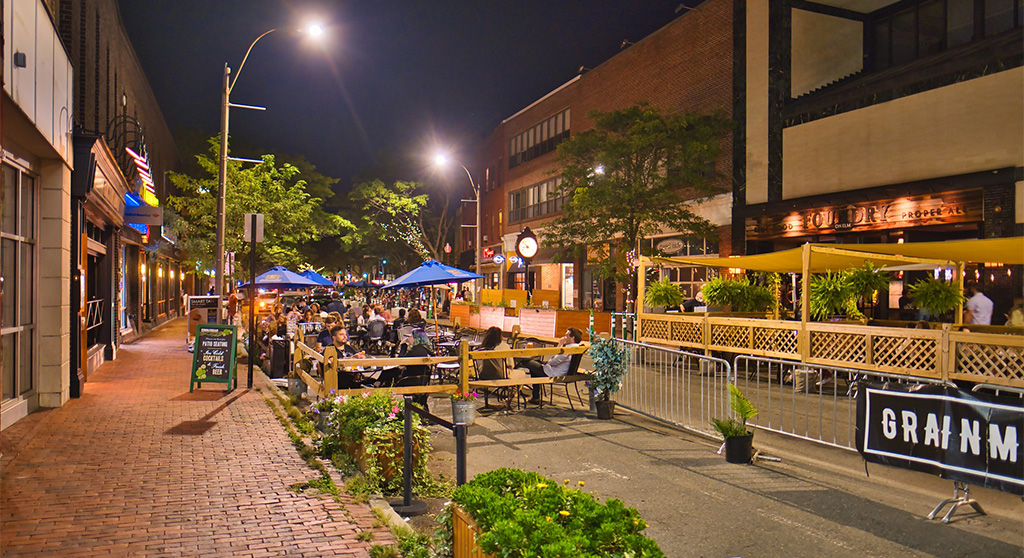 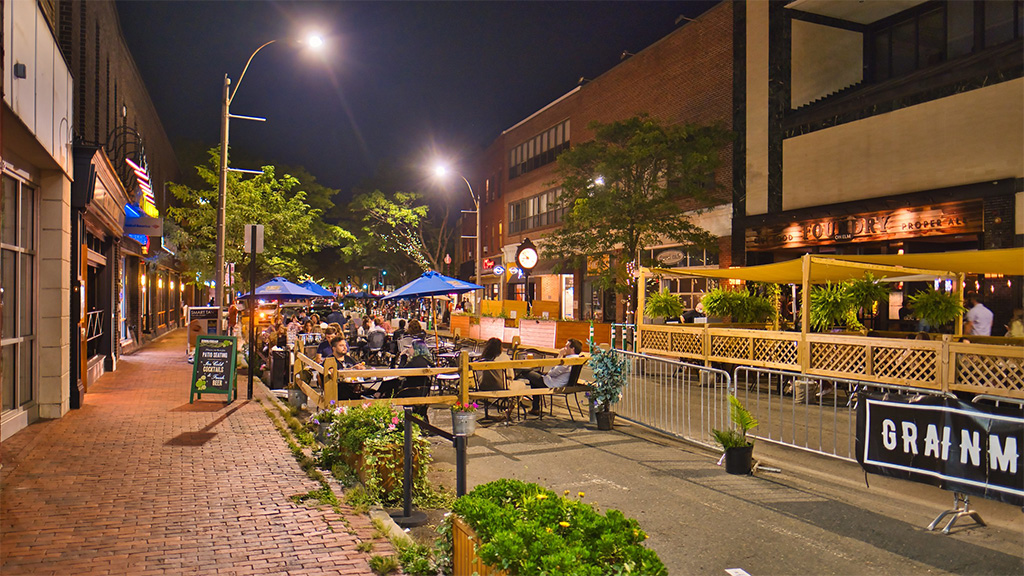 Elm Street in Somerville’s Davis Square has squeezed traffic with outside dining, and some want to close it to vehicles altogether. (Photo: Chris Rycroft via Flickr)

The idea of turning Elm Street in Somerville’s Davis Square into a pedestrian-only space has been popular with community members – unscientific polling on social media by the “Somerville Live Wire” public affairs TV show found 71 percent of some 700 respondents in favor. But Joe Lynch, chair of the Somerville Licensing Commission and president of the Somerville Media Center, said on the show that executing such a project would be more complicated than many may realize.

“I would not give any hope that this is going to see traction in any significant way for the outdoor dining season of 2022,” Lynch said.

Backers can still push the idea with newly sworn-in Mayor Katjana Ballantyne, but even limited pedestrianization has been rejected three times recently in Cambridge. An effort to limit car traffic in Harvard Square was scaled back dramatically in September 2020, and shutting down part of Central Square on Sundays was passed unanimously by city councillors in June 2020 but not acted on by city staff. Closing Massachusetts Avenue to car traffic in Central Square on weekend nights for a few months in 2021 was embraced by most councillors but rejected by the city manager.

Like on Massachusetts Avenue in Central Square, outdoor dining would play a prominent role in the pedestrianization of Elm Street in Davis Square.

Making streets pedestrian-only is typically presented as business friendly, but Lynch said it’s not so simple – and he wouldn’t sign off without a full public process from various municipal departments first.

“On public property it is a much more complex puzzle … so that we don’t have unintended consequences of hurting one business yet providing a public amenity for another,” Lynch said.

Restaurants must adhere to rules that come from the state Alcoholic Beverages Control Commission, Lynch said. One rule is that outdoor dining must be next to the front of the restaurant serving it, and exceptions – where a storefront has no space but there may be room farther down the street – remain to be addressed. Parking, traffic patterns and accessibility for the elderly and disabled are other concerns.

Chris Iwerks, co-director of DavisNow, the organization behind the proposal, Iwerks, said Lynch’s critiques as described to him seemed like “procedural issues … you have to go with the big idea, and then work out the details.”

He was “disappointed,” though, at the lack of action from mayor Joe Curtatone, who had initially been receptive and promised his administration would “take this up before he was out,” Iwerks said. After serving as mayor for nine terms since 2004, Curtatone said last spring that he would not run for reelection; his time in office ended with the new year. “With the last mayor, saying that he would do things and then not having him do things, it just makes you feel a bit disempowered,” Iwerks said.

The group’s next steps include talking with Ballantyne’s administration, after giving it some time to settle in, Iwerks said.