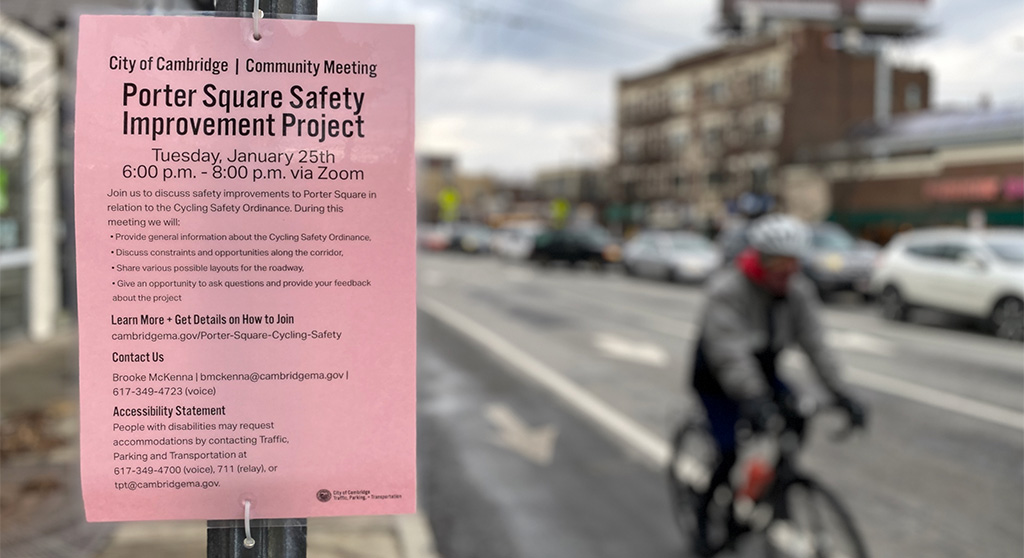 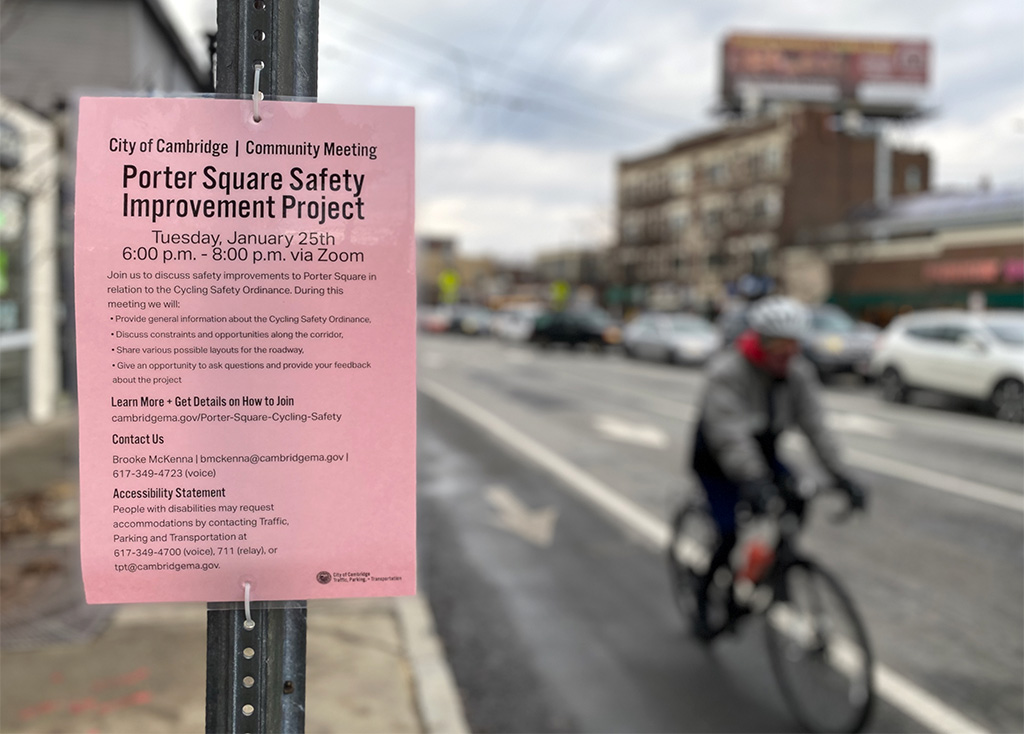 Preliminary plans for protected bike lanes through Porter Square were presented Tuesday by the city, feeling familiar and raising familiar divisions among residents.

Plans call for the installation of quick-build flex posts with pavement marking changes and signs separating cyclists from car traffic on a 0.3-mile stretch of Massachusetts Avenue from Roseland Street to Beech Street, and for the removal of significant numbers of parking spaces along curbs, sparing those needed for people with disabilities. The focus was on “moving people and goods, not their vehicles,” project manager Andreas Wolfe said.

The design was similar to the one bringing months of conflict over a related project farther north on Massachusetts Avenue, where business owners said the changes threatened their livelihoods. That section was completed in November, but concerns filled City Council meetings in December and January, culminating in two orders passed Jan. 11 seeking to make the bike lane planning process more open to input from neighbors.

Reaction was swift to the Porter Square plans described by the Traffic, Parking, & Transportation department in a Jan. 11 announcement. “To receive this email regarding the protected bike lanes between Roseland and Beech clearly stating that the only things that will be considered are flex posts, street painting and signage feels like a slap in the face,” Angela Hofmann, owner of the Nüssli118 vegan food ship, said in comments emailed to the council ahead of its Monday meeting.

Cycling activists said the elimination of parking may be premature, but cheered the project and noted that their advocacy for safer streets stretches back more than five years, when Bernard “Joe” Lavins was killed by a tractor-trailer in Porter Square. “While some safety improvements were made, there are still no safe, protected bike lanes [on Massachusetts Avenue] in Porter Square. We firmly believe these protected bike lanes are vital to creating a safer and more vibrant square for people biking, walking, using public transportation and driving in Porter Square,” Cambridge Bike Safety said in an email sent to its subscribers Friday.

The project is part of the city’s updated Cycling Safety Ordinance, which requires the city to complete installation of these separated bike lanes by April 30. City planners outlined two possible designs on Tuesday, with Wolfe calling them “preliminary ideas” that are “very early on in the process.”

Staff started by noting that Porter Square is a transit hub with more than 14,000 daily riders passing through its red line T stop and on three key bus routes. Statistics from a 2020 study showed 35 percent of shoppers arrived by public transit.

An additional consideration in the area is the catenary wire system powering the MBTA’s buses. These high-voltage wires limit possible designs because firetrucks need ample space to navigate their ladders around the overhead wires. While the MBTA has considered phasing out the catenary wire network, the city says plans for its removal are not far enough along to be included in the timeframe required for this project.

The first design presented by Wolfe keeps car travel lanes but replaces parking – except what’s designated as accessible – with a protected bike lane. The second design also removes parking in favor of the protected bike lane, but switches out one car travel lane for a dual-purpose priority bus lane and loading zone, identical to the design in North Massachusetts Avenue.

Along the stretch, several areas deserved special attention. The first is the intersection of Massachusetts Avenue and Somerville Avenue, which was overhauled in 2018 in response to Lavins’ death, where city staff contend that the road is too narrow to support installing protected bike lanes. Wolfe also noted that the MBTA owns the bridge running under the intersection, exempting the area from the Cycling Safety Ordinance.

Staff mentioned that the meeting was well attended, with more than 300 people joining the public Zoom call. Comment first skewed highly positive, and many commenters praised the design for making a notoriously dangerous section safer. “I’m very much looking forward to protected bike lanes here,” said Jenny Turner-Trauring. (The youngest person to comment was next: Turner-Trauring’s daughter, who said, “I always have to walk my bike on the sidewalk when we’re going on that stretch because the street isn’t safe.”)

As comment wore on, more residents voiced concerns similar to those raised in the North Massachusetts Avenue debate. “I think most of the people here are very much for [improving] the bicycle situation. I am very much against it. It seems as though bicycle vision is running the city,” said Pam Winters, a resident of Porter Square.

Outside of general comments on bike lanes, residents brought up several technical concerns with details from the city’s presentation. “I’ve heard from multiple sources that the T is planning to deactivate the catenary wires as early as mid-March. If that were the case, then it would seem that all obstacles to permitting … parking there would be removed,” said Nate Fillmore, a member of the Cambridge Bike Safety group. “That would be really helpful to creating a project that the whole community can get behind.” There were also options for parking on side streets and possibly on Lesley University lots, speakers said.

There will be least one more community meeting in the winter and targeted outreach to businesses as designs are polished, city staff said, and results of a public survey would be made available on the project’s website.