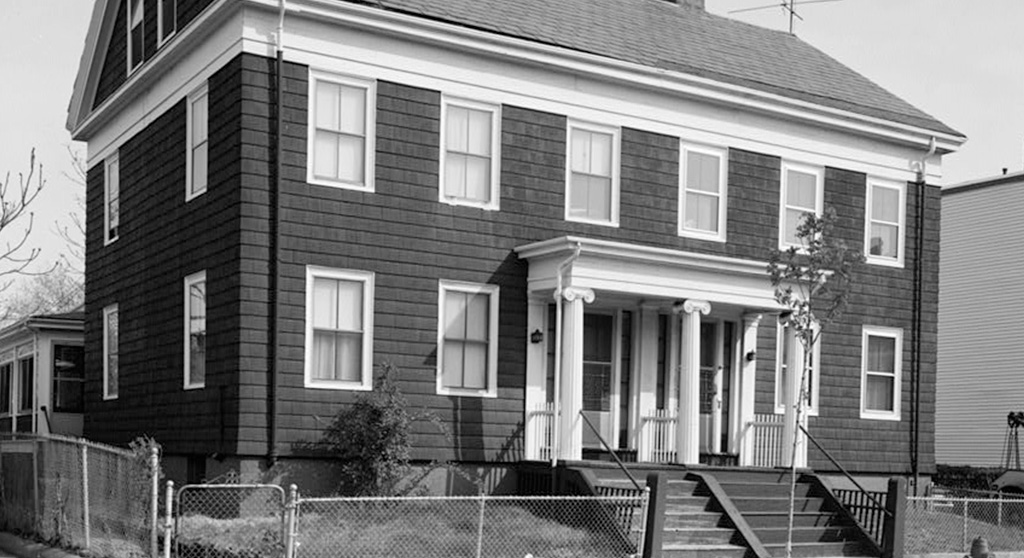 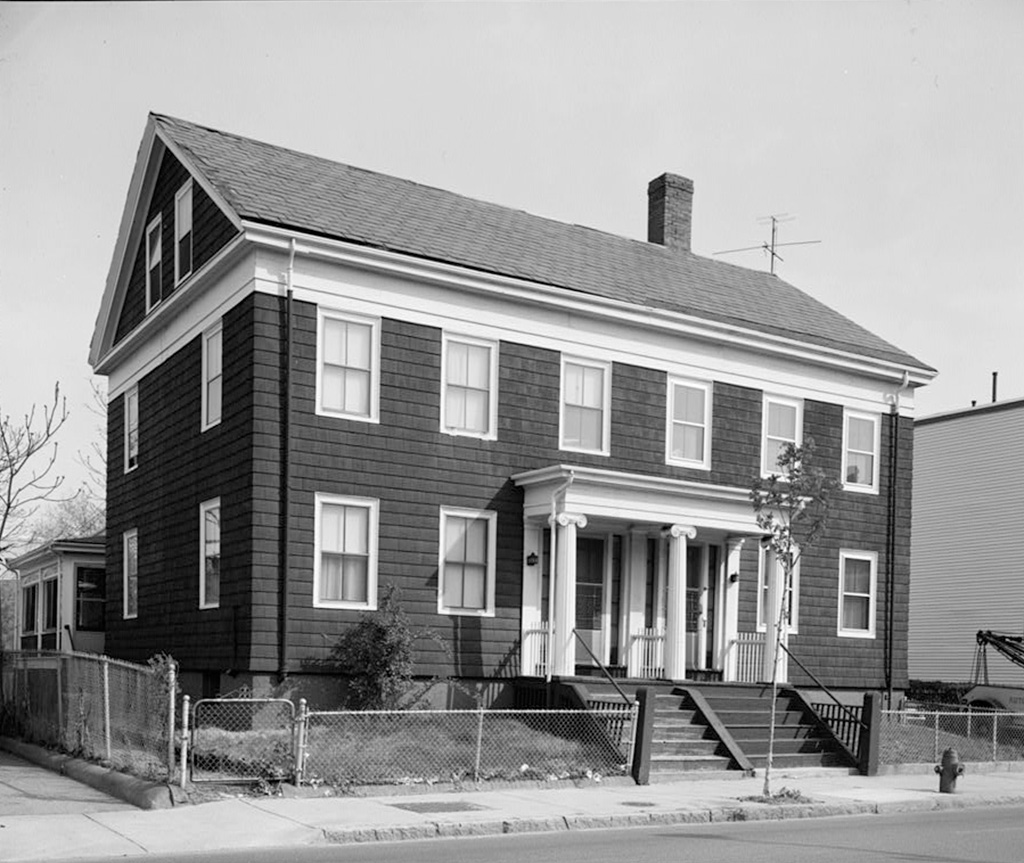 The Maria Baldwin House in The Port neighborhood circa 1933, more than a decade after the groundbreaking educator moved out. The house is on the Thursday agenda of the Historical Commission. (Photo: Library of Congress)

City Council, 5:30 p.m. Monday. After two weeks without a meeting, this one threatens to be long, with the return of orders that could eliminate off-street parking minimums (debate on this started three weeks ago) and one to study “business impacts from bike lane installations, positive or negative.” Any bike lane topic is likely to bring lots of public comment at the start of the meeting; the agenda for the night includes 113 communications already, which could be an omen. (More transportation-themed issues: former city councillor Craig Kelley returns with a petition for more “publicly accessible, privately owned” electric car charging stations, called the Transportation De-Carbonization and Congestion-Mitigation Bill; and the idea of closing more of Memorial Drive for recreation is raised anew, considering that existing “Riverbend Park” land will be soon be shut down for renovations by the state.)

Also coming back is a bid to change the law around creating neighborhood conservation districts. The idea last year came from Loren Crowe, a dedicated opponent of the East Cambridge Neighborhood Conservation District being weighed by a Historical Commission group under the process he hopes to change. Because it lapsed without action when the council term turned over, councillor Marc McGovern said he was reintroducing it in largely the same form to continue the conversation where it left off. The city solicitor is back too with a report on changing city law to match charter changes approved last year by voters; councillor Patty Nolan shut the previous version down Jan. 31 as being unresponsive to what was asked. Finally, an order about incentivizing fossil-fuel-free construction is back after also being set aside three weeks ago.

Atop all that, it’s credit-ratings time, with the City Manager’s Office reporting that Cambridge has yet again pulled off three top rankings from the big agencies, Moody’s, S&P and Fitch, as it has since 1999. A few years ago, questions began to be raised about the value of the three-part brag.

There’s a call to bring together the Cambridge and Somerville city councils and police departments to discuss “how to work together to address the gun activity taking place between our youth” and rising over the past two years, and a report has been filed by councillor E. Denise Simmons’ Advisory Committee on City Art, Monuments and Markers. After approval in June 2019, the work of this group didn’t begin until January 2021 and was largely done in June, having come up with a definition of “shameful acts” that would trigger a review of a monument or honor leading to anything from to no action to removal, with re-contextualization, relocation or the commission of a work in response coming in between. The report offers principles for judgment adapted from similar work in New York and criteria to be used when creating future city art, monuments and markers. It recommends that a standing advisory committee be created to meet regularly and screen questionable honors to see if they “generally fit under the definition of a shameful act.”

Councillors are being asked to help review people nominating themselves to be on the screening committee for candidates aiming to become the next city manager, and to keep honing their own goals for the next budget “to facilitate planning and coherence.”

Health & Environment Committee, 11 a.m. to 1 p.m. Tuesday. This committee run by city councillor Patty Nolan gets an update on the Net Zero Action Plan. Greenhouse gas emissions from buildings keeps worsening in Cambridge despite adoption of the plan in 2015, but in late January the city manager offered an update. The committee meets at City Hall, 795 Massachusetts Ave., Central Square. Televised and watchable by Zoom video conferencing.

School Committee, 6 p.m. Tuesday. Beyond hearing a Covid update from superintendent Victoria Greer, committee members expect to vote on letting more educators into a Pathways for Paraprofessionals program. It launched in the fall of 2020 with 20 participants who have to cover only the cost of course fees and materials as they pursue master’s degrees and licensing to become lead teachers in the district. Most are “engaged and enthusiastic,” member Fred Fantini said. The committee meets in the Dr. Henrietta S. Attles Meeting Room at Cambridge Rindge and Latin School, 459 Broadway, Mid-Cambridge. Televised and watchable by Zoom video conferencing.

Planning Board, 6:30 p.m. Tuesday. A review is planned for what life-sciences developer IQHQ expects to do at 36-64 Whittemore Ave., a 19.6-acre site in North Cambridge near Alewife. Also: Santander Bank is withdrawing its request for a special permit to move to a former Qdoba space at 1290 Massachusetts Ave., Harvard Square, from 1420 Massachusetts Ave. The change initially violated the intent of the Harvard Square Overlay District to decrease the amount of street space that banks take up – and drew a negative recommendation from the Harvard Square Advisory Committee because of it – but the bank says a redesign changed enough to win a building permit from the Inspectional Services Department. “A special permit from the board is no longer required based on the bank’s new design and footprint,” the bank’s Adam Braillard said. Televised and watchable by Zoom video conferencing.

Government Operations, Rules & Claims Committee, 2 to 4 p.m. Wednesday. This committee run by vice mayor Alanna Mallon reviews a draft leadership profile and next steps in looking for the city’s next leader for the day-to-day running of the city (and, judging by the past 40 years, much more). Televised and watchable by Zoom video conferencing. The committee meets at City Hall, 795 Massachusetts Ave., Central Square.

Finance Committee, 5:30 to 7:30 p.m. Wednesday. This committee made up of the whole City Council and run by city councillors Dennis Carlone and Patty Nolan meets to discuss money coming to the city from an American Rescue Plan Act grant. The money Cambridge is getting to use on items related to Covid-19 recovery includes $65 million arriving directly and another $23 million funneled through the state. The committee meets at City Hall, 795 Massachusetts Ave., Central Square. Televised and watchable by Zoom video conferencing.

Transit Advisory Committee, 5:30 to 7:10 p.m. Thursday. After hitting the Pedestrian Committee last week, city staff brings its 40-minute presentation on “Zoning 101: An Overview of Zoning Standards and Development Project Review” to this advisory committee. The information could be useful for any resident. A discussion of the group’s work plan for the year is also on the agenda. Watchable by Zoom video conferencing.

Bike lane meeting, 6 to 8 p.m. Thursday. The installation of bike and bus lanes from Dudley Street to Alewife Brook Parkway along North Massachusetts Avenue in November wasn’t a smooth ride, politically, and led to City Council orders for city staff to get more feedback on the impact of the lanes; this meeting picks up where that project left off, extending the avenue’s lanes between Dudley and Beech street and Roseland to Waterhouse around Porter Square as part of the city’s Cycling Safety Ordinance. The presentation will be posted to the project page before the meeting so residents can submit questions in advance and join the meeting at 6:20 p.m. for just the Q&A portion. Questions can be submitted to Kate Riley at [email protected]. Watchable by Zoom video conferencing.

Historical Commission, 6 p.m. Thursday. Commissioners consider a landmark designation study for the Maria Baldwin House at 196 Prospect St., The Port, and its attached buildings. The educator and social reformer, who lived from 1856 to 1922, has an elementary school and neighborhood named after her closer to Porter Square. This privately owned Greek Revival double house was named a national landmark in 1976.  Also: Boutique-hotel plans and a potential landmarking are back for the circa-1912 Cambridge Gas Light Co. Building at 727 Massachusetts Ave. near Central Square. Watchable by Zoom video conferencing.