The international flavors of Trolley Square 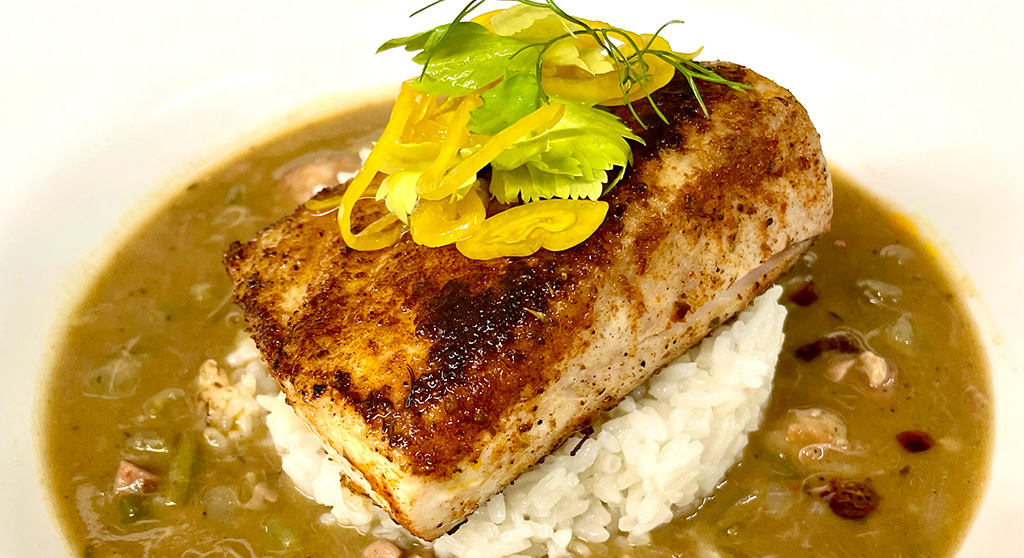 The international flavors of Trolley Square

There’s no question the pandemic has been hard on the restaurant biz – on Saturday, the Newtowne Grille, a fixture in Porter Square for 56 years, closed its doors for good. But in the North Massachusetts Avenue locale known as Trolley Square, named for its proximity to an MBTA bus depot, seven diverse eateries quietly continue to serve the community.

During more than two years of Covid, many North Cambridge establishments have had to pivot, and the area is seeing its own adjustments. The depot will shut down for two years to be turned into a bus-charging station as the MBTA heads toward becoming all-electric, taking down overhead catenary wires. Parking was reconfigured in November when protected bike lanes were installed from Dudley Street to Alewife Brook Parkway. The new bus lane out front of these eateries doubles as a loading zone between 9 a.m. and 10 p.m., so grabbing pickup should be a breeze. Some might not be aware, but the entirety of the western bus lane next to the new protected bike lane in North Cambridge is now designated a loading zone where passenger cars are allowed 15-minute stops.

Lots of changes, but the food still comes, and pleasingly so. The Trolley Square culinary spectrum includes Chinese, basic bar, American fine, sushi, a pizza pad, Greek, Ethiopian and Mediterranean. Some are great for grab-and-go, while others are more of a planned occasion. We wrote recently about the classic bar fare and pub vibe at the speakeasy-themed Joe Sent Me, where you can get a decent burger or chicken wrap while taking in March Madness upsets. Joe’s also hosts trivia nights and draws a 5 p.m. family meal crowd. 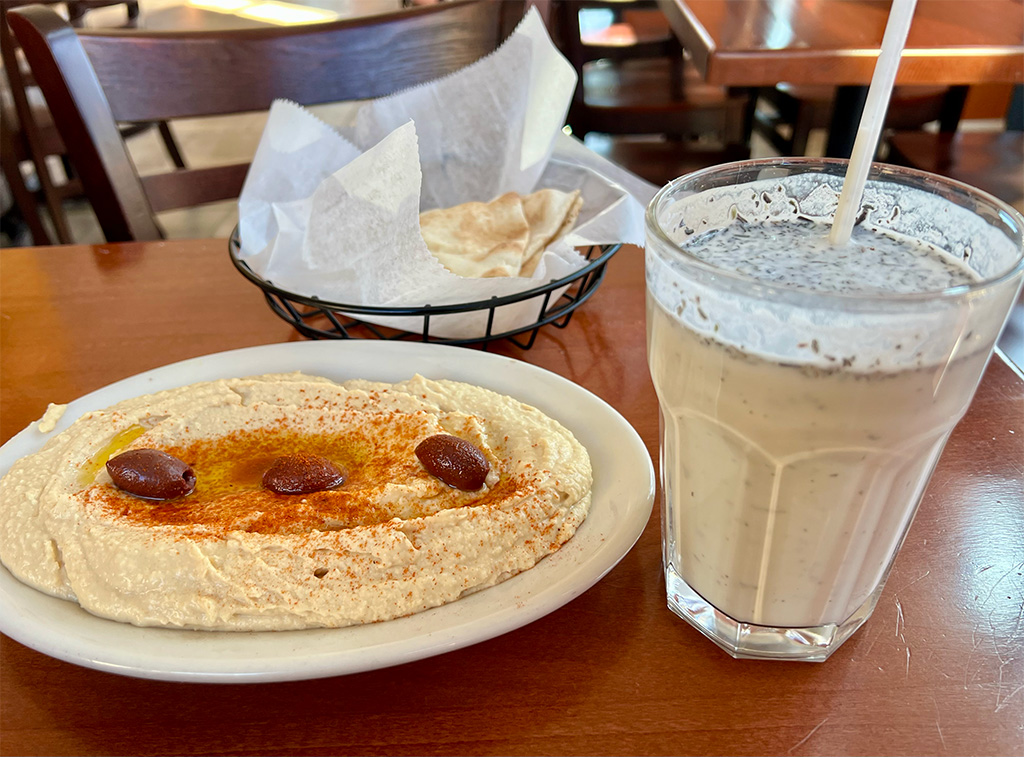 On on the other side of the avenue, where the Cambridge Linear Path and Somerville Community Bike Path meet, is Mediterranean Grill, a Persian-themed eatery for a nosh as you head out on (or in from) a stroll or bike ride. Open for lunch and dinner and with a selection of beer and wine, Mediterranean Grill serves up perfectly grilled kebabs, including the koobideh variety of spiced ground tenderloin or chicken. Chef specialties include marinated and braised lamb shank in a rich tomato sauce with baghali rice and green beans. The thing I come for is the hummus, something simple and hard to do poorly, but when it’s a cut above, it can be sublime; the Grill’s is one of the very best – creamy, rich and smooth, and accented with paprika, olive oil and Kalamata olives. The accompanying pita comes out warm and soft. The soups too are winners, an essential lentil with turmeric and garlic and the ash reshteh, a thick blend of beans and chickpeas with noodles topped with mint and kashk, a kind of drained yogurt or whey. The hummus or either of the soups are a lunchtime meal in their own right; the Grill also serves wraps and salads. 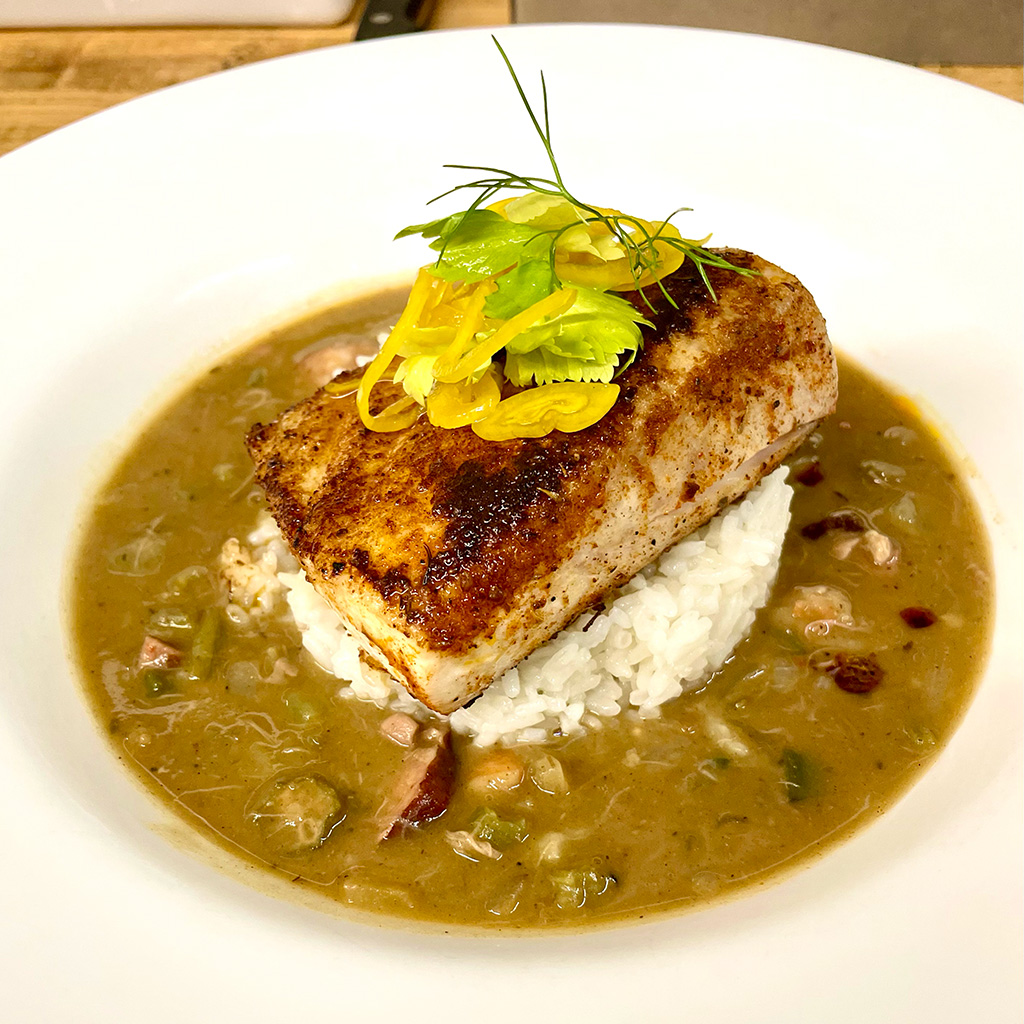 Just up Massachusetts Avenue a few klicks is Season to Taste, which has pivoted with balletic agility to changes forced by Covid. Before, Season to Taste was a catering service; The Table at Season to Taste was next door, with James Beard-nominated chef Carl Dooley serving up eccentric gourmet curios to those able to score a seat around a cozy, open tasting kitchen. The pandemic shuttered the Table, but proprietor Robert Harris shifted to Season to Go, slinging burgers and family-friendly entrees (chicken, steak and pasta) for lunch and dinner. It’s more recently gone back to sit-down dining, featuring homey outdoor canopy tents, well-heated and with burning yule log videos, as well as some sit-down spots in the old Table space. The menu’s tight but eclectic, with oyster mushroom arepas, duck confit, Jamaican jerked cauliflower steak, pork schnitzel and creole-spiced mahi-mahi. Harris, who grew up in the South, has added some of his hometown spice to items such as that mahi-mahi, which I cannot recommend enough. It is perfectly pan-seared atop a bed of gumbo rice with large chunks of okra, chorizo and shrimp in a glorious gumbo gravy. The arepas are something delicious and hearty that some of Season’s staff brought to the table from their home in Colombia. On the apps side there are housemade pickles, gas station fried quail (another Southern thing) and beef tartare. You can get much of the menu through the Season to Go online portal, and pickup is easy from a rack right outside the kitchen. As far as the new configuration for parking goes, Harris pivoted there as well, renting spaces in the Bright Horizons lot next door. If you’re wondering about that “for lease” sign on Season’s storefront, take a deep breath: Harris isn’t going anywhere for a while, and will keep his catering operation on-site; the dining will shutter, with Harris opening a new act in the area shortly. 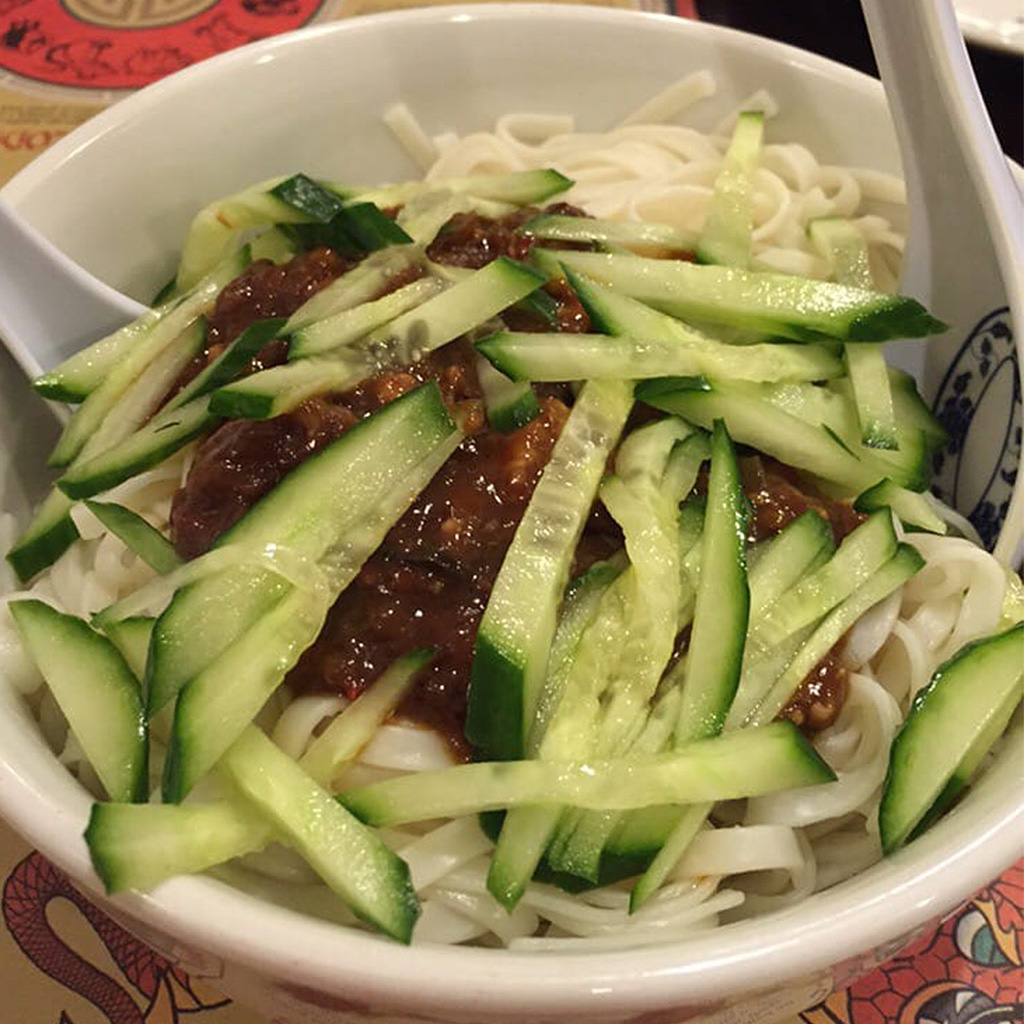 Back across the avenue is a quartet of pan-cultural destinations in a tight, neat row. First up is Qingdao Garden, which offers a vast selection (well over 100 items) of Chinese cuisine, with a focus on Northern dishes. The place is known for its dumplings, with the pork and cabbage, vegetables and leeks, and spinach variations being the big draws. These are not your typical pan-fried and oozing dumplings – the wrappers are thick and doughy, filled plump and steamed for a cleaner and chewier taste and texture. On the specialty menu, the seafood and tofu hot pot is a belly-warming winner, as is the crispy or steamed flounder. (Get it crispy.) For the adventurous, there’s fish head and pickled cabbage, and pig kidneys. Qingdao also has dishes more familiar to many: kung pao, General Gau and moo shi menus, not to mention (and thankfully so) an egg foo yong section. Under the Northern specialties, I’m partial to the diced chicken Peking style, and the fried tofu with black bean sauce. The fried rice at Qingdao is solid too; like the dumplings, it’s low on the oily factor and a pleasingly healthy change. Given the pandemic, Qingdao has scaled back and is open only Wednesday to Saturday for dinner. 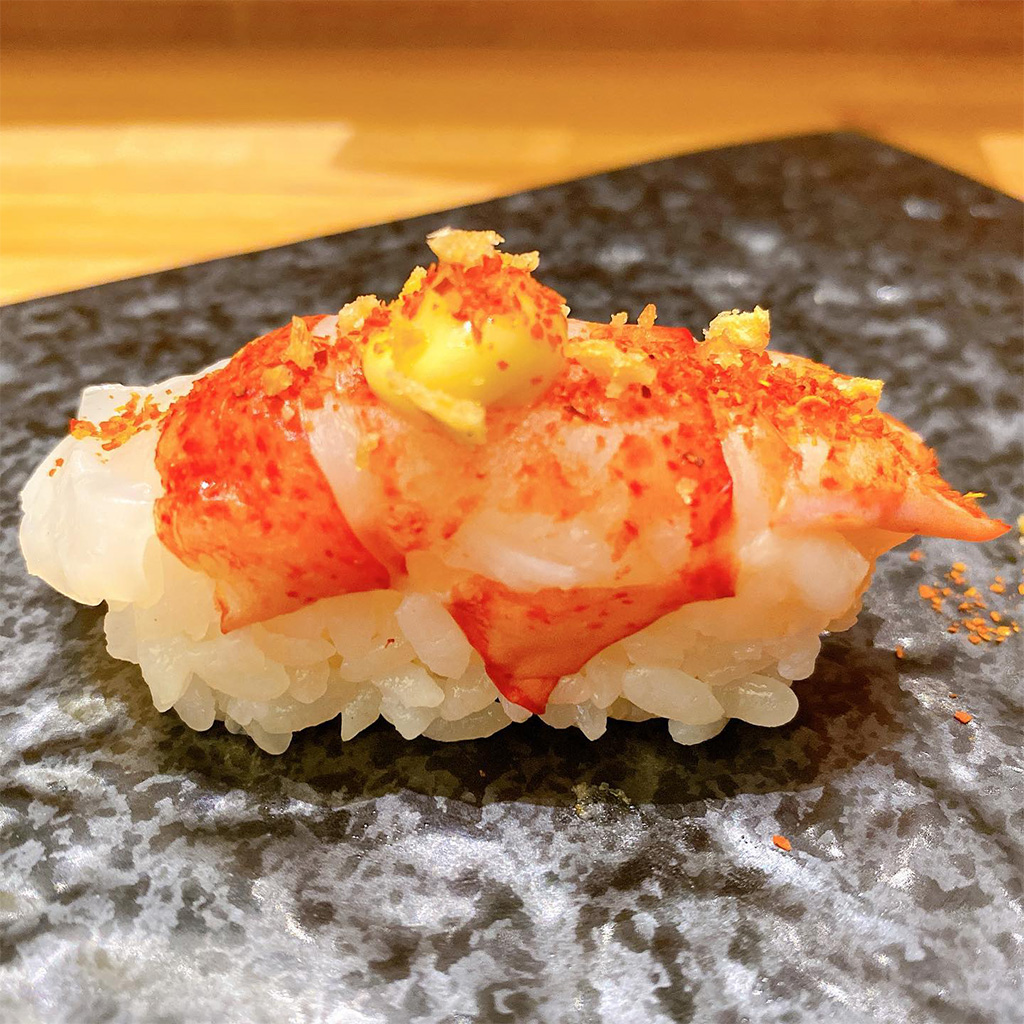 If you dig sushi, Umami Omakase is your place for a unique and rare dining experience, but it will give your wallet a bit of a workout. Umami is an omakase-only eatery, meaning 18 courses of chef’s selections that are glorious works of food art that taste even better than they look and come with their own narrative – where the fish and caviar came from, and how it was prepared. Sixteen lucky diners get to cluster around an open area to see much of how the food is prepared by a team led by chef Gary Lei (previously of Ken Oringer’s Uni). There are side tables too, but trust me: You want to be at the sushi bar. Lei opened Umami just before the pandemic, making for a fitting replacement to Hana Sushi, which had been in the locale for more than 30 years. The two-year slog of Covid meant more takeout, though most of what you can get to-go are still omakase platters, along with donburi bowls and individual sushi pieces. It’s good, but you can’t top the live chef experience, a languorous two hours with something new popping up in front of you about every five to 10 minutes. An evening’s arrangement seems to always include miso soup, seafood custard, wagyu beef with foie gras and a giant langostino (torched, translucent and tender) amid an impressive array of fresh fish perched atop a perfectly molded cube of sushi rice. The presentation, temperature and texture of each small plate is impeccable, with garnishes such  as truffles, exotic roes and garlic chips. The toro and whitefish preparations will likely have you adding an extra piece or two at the end of the meal, and there are desserts. My last time in, it was a jar of custard that came out in a small wooden box with dry ice, a very neat effect indeed. The full experience will be roughly $100 and up depending on options – fairly cheap for omakase around Boston. It can be enhanced by a sake-tasting pairing that is well worth going all in on.

Just next door is the Sheger Cafe and Ethiopian Restaurant; four years in, the family recently opened an Ethiopian-focused convenience store next door. The menu is very traditional: stewed meats and vegetables in savory sauces served with injera, a fermented flatbread with a spongey quality used to scoop and sop up the food with your fingers. Sheger’s vegetarian samosas, brimming with spiced lentils in a golden crispy shell, are an addictive surprise. A good amount of the menu is beef- and lamb-based; on my last sampling I had the doro wot, chicken slow simmered in red pepper sauce, and the veggie combo of curried vegetables cooked in a similar red pepper sauce with a medley of spices. Both were excellent – especially the chicken, which you could tell had been under a caring, watchful eye. The sauce had a subtle, pleasing bite. If you’re there on a date, Sheger offers a combo plate for two. Each roll of injera is stuffed with a different stewed and seasoned treat. 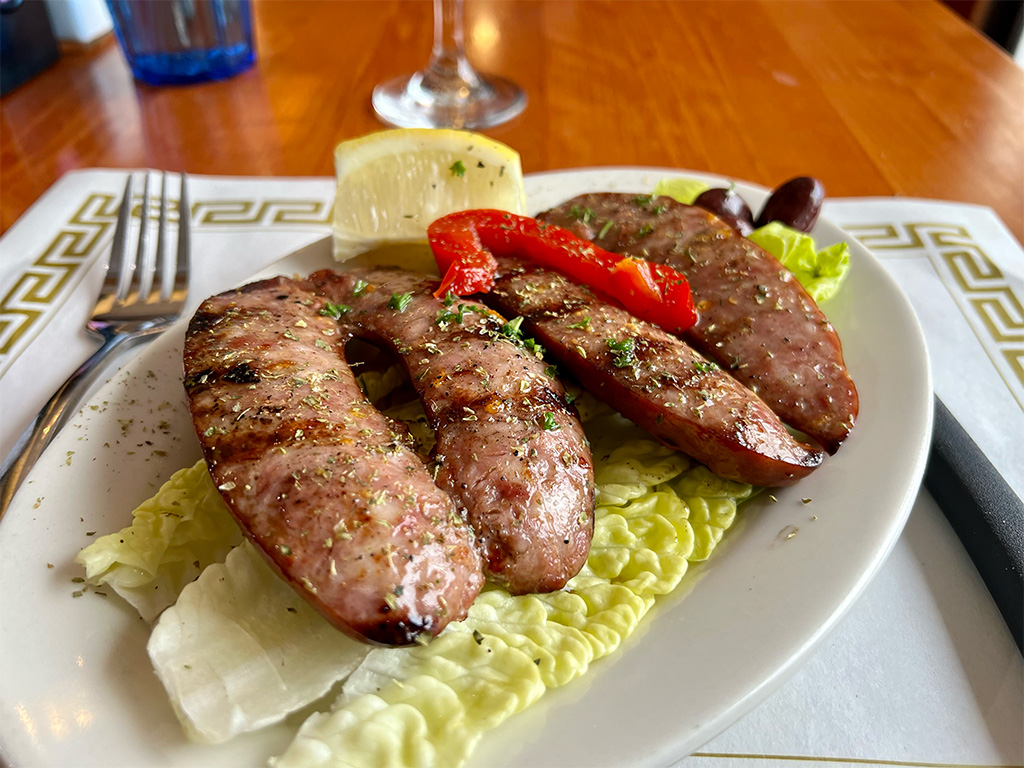 Lastly, at Dudley Street and Massachusetts Avenue is the long-timer: Greek Corner Restaurant, which has been serving up gyro, spanakopita (spinach pie) and baklava for more than 30 years. (Joe’s clocks in at just over 22 years.) It’s open for lunch and dinner with beer and wine service. I’ve become a big fan of the appetizers, namely the homemade smoked sausage, flame-grilled with a hint of spice and quite savory, and the marinated octopus, which is tender, not tough. There’s also fried zucchini and broiled butterfly shrimp that I’ve yet to try, but seeing the plates come up garners a “want” reaction. The avgolemono, an egg drop lemon soup with rice and chicken is a wonderful discovery. If you go for lunch, Greek Corner has a combo deal onto which you can add a small bowl of soup for next to nothing. Besides gyro, there’s a vast array of Greek and basic sandwiches, including a feta melt and burgers any way you want them. For bigger plates there’s souvlaki (marinated lamb shank), moussaka (eggplant layered with beef and potatoes, and topped with a béchamel sauce) and pork chops. If you’ve got a sweet tooth, the baklava’s great, but I’m partial to the rice pudding.

To be a Trolley Square completist, visit Cambridge House of Pizza across from the Mediterranean Grill by the entrance to Linear Park, for an array of pies, subs, calzones and spaghetti dinners. It’s the perfect place to pop in whether on bike or car (there’s a parking lot) to grab a slice – pepperoni, please.