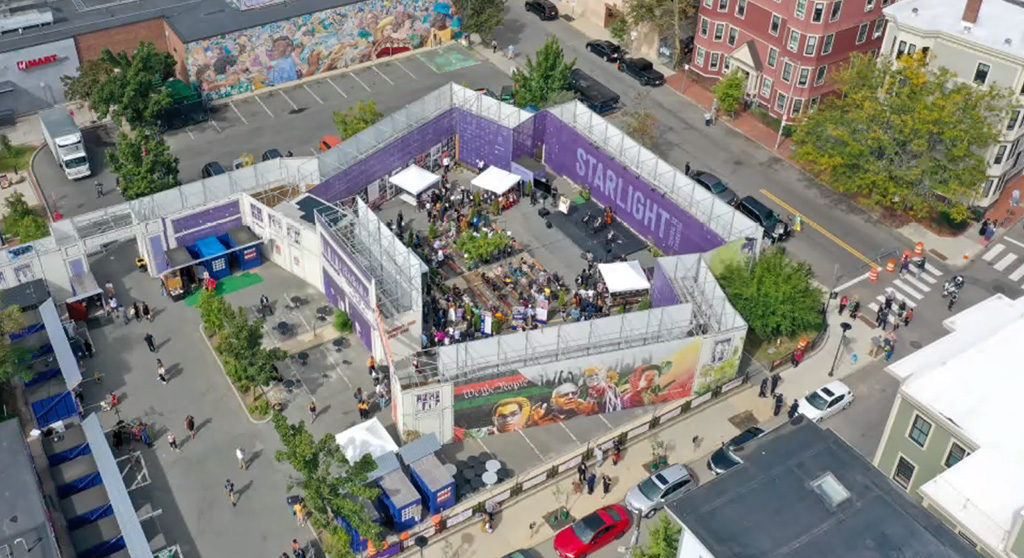 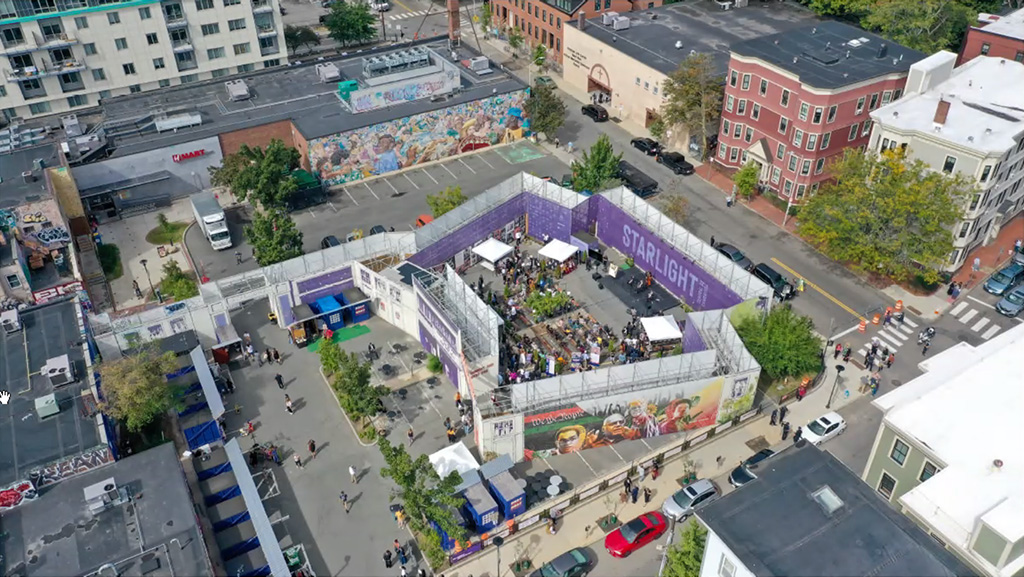 Starlight Square, in an image provided to the Board of Zoning Appeal, is an outdoor complex with noise that can sometimes bother its residential neighbors.

Instead of getting the hoped-for full season of programming, the Central Square Business Improvement District that operates Starlight Square can operate through Aug. 1 on conditions that it will work with neighbors to address their concerns about noise. The five-member Board of Zoning Appeal expects the permit request to return July 28 to see how well the concerns have been met, and then may allow the rest of the season’s events to be held as expected.

The Starlight season runs from May into the fall, with free access to events, and the BID has agreed to run this third year of programming as it did the second: limited to five days a week and letting events have amplified sound no later than 9 p.m.

The lead presenter for the organization was Michael Monestime, a board member who until recently was executive director for the BID, and led it in creating Starlight Square atop a municipal parking lot at 84 Bishop Allen Drive, Central Square – across the street from homes in The Port neighborhood.

The BID arrived Thursday with “a series of adjustments … to address the impact of sound on abutters,” Monestime said, and around 50 letters of support from residents, businesses, organizations and officials, including all nine city councillors and state Rep. Mike Connolly. Some, including councillor Dennis Carlone and nonprofit leader Risa Mednick, supported Starlight by noting Cambridge’s shortage of open space and civic spaces compared with other communities.

On the other side of the issue, literally, were several residents who called in with complaints about Starlight’s noise and a lack of effort to resolve them.

The testimony started off dramatically with a caller identified only as Diana, who broke down sobbing telling board members that her “house is unlivable, because it’s too loud. They put a concert in my backyard, and they’re messing with my mental health.” She’s often been unable to escape to study for medical school after working 12-hour shifts at a hospital, and must take her mother into the bathroom to try to calm her panic attacks because it’s the only place where the noise is dampened.“It’s relentless. And it’s every day,” the caller said. “I’ve worked so hard and now the city doesn’t care.”

Not every call was so dramatic, but there were others who considered the noise from Starlight Square “assaultive,” “destructive” and “exhausting.” Resident Michael James said the BID had promised repeatedly that it would put out a multilingual survey asking residents’ opinion, without following through.

There were also calls that balanced positives and negatives. Dan Totten, legislative aide to councillor Quinton Zondervan, said noise from Starlight did invade his room, especially when windows had to be open for air during the summer, but its events had also been “essential to my mental health” when he was suffering from a lack of interaction with other people. “This establishment has given young people in our community a place to shine and great opportunity, and that’s indispensable,” Totten said.

The concerns of the neighbors, Monestime told the board, “are heard loud and clear.”

Though sound tests over the previous seasons by a sound engineer and police always showed Starlight to be within legal limits, the BID still planned to cut the number of speakers in the complex by half to see if that would mitigate the effects on neighbors. “That’s the first power move that we’re making in good faith to show that we hear the neighbors loud and clear and want to address their concerns,” Monestime said.

The board expressed sympathy for the dilemma.

When the country floundered and despaired during the pandemic, “some very talented and imaginative, creative people created Starlight Square, and Starlight Square proved to be, for most of Cambridge, a very significant thing that has helped us to deal,” member Constantine Alexander said. “But there’s a price along with that. And that price is paid by the neighbors with disruption to their lives.”

Sooner or later, this pandemic is going to recede and “we’ll be able to return to life as it once was, or close,” Alexander said. “That’s the time I think Starlight Square has to reconsider its role … I’m very happy to hear from Michael that you’re starting an effort. That’s good. But it’s not a one-off; it’s got to be a continuous effort.”

Board vice chair Jim Monteverde wanted residents to know that the BZA also was listening, and said the Business Improvement District needed to come in with a mitigation plan based on monitoring the effect of its programming and listening to neighbors. “It won’t happen tonight,” Monteverde said of the full Starlight approvals.

Though Starlight had filed in the past for full seasons of events with the License Commission, zoning board member Slater W. Anderson objected to that approach this time. He asked for events to be requested in groupings of no more than 30 days’ worth at a time; associate member Wendy Leiserson agreed that the zoning board couldn’t sidestep its responsibility by thinking “the licensing board will take care of this, or the BID will take care of the concerns of the neighbors … this case goes to the heart of zoning, where we have multiple competing interests, all of whom have valid points of view.”

Though it would be “incredibly labor intensive,” Monestime agreed to seeking event licensing in chunks rather than for a full season.

Ultimately the board agreed to a special permit that would let Starlight operate, warning that the season could end abruptly Aug. 1 if the hearing on July 28 didn’t find happier neighbors in The Port.