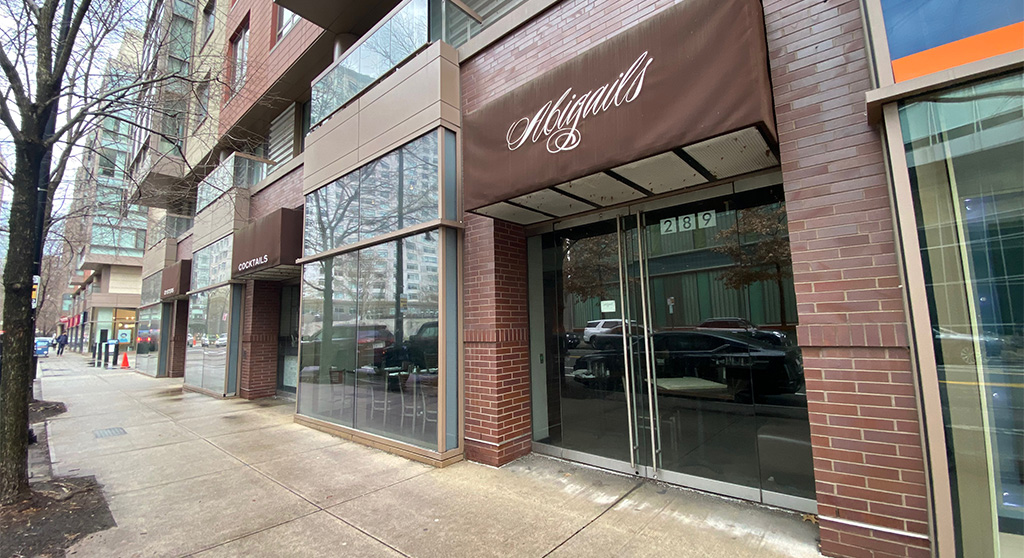 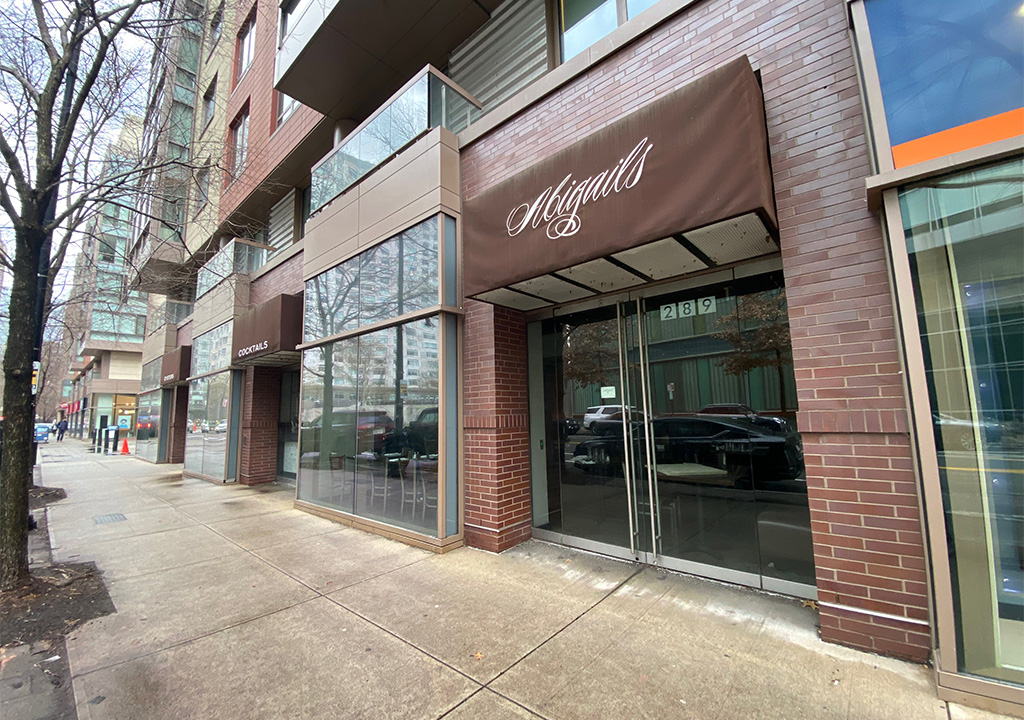 Abigail’s, which closed in Kendall Square in June 2020, may be replaced by Café Batifol. (Photo: Marc Levy)

License Commission, 11:30 a.m. to 1:30 p.m. Monday. Abigail’s, the Kendall Square restaurant known for seafood and “family-style whole animal roasts,” was closed by the coronavirus pandemic all the way back in June 2020 and is finally due to be replaced at 291 Third St. The 122-occupancy, 3,075-square-foot restaurant bidding to come in is Café Batifol (which means “frolic” in French), run by Loic Le Garrec of Petit Robert in Boston’s South End. This agenda also includes the coming of a Life Alive Organic Cafe to Kendall Square and a bunch of warm-weather patio approvals, from Hi-Rise Bread Co. to Puritan & Co.; a 10:30 a.m. closed-door session is planned to discuss litigation against Thistle & Shamrock and Fresh Pond Auto Sales. Watchable by Zoom video conferencing.

City Council, 5:30 p.m. Monday. There are no policy orders on the posted agenda for this meeting – unique at least in recent memory – but city business goes on, with reports from the city manager on resettling refugees in Cambridge (timely with Ukraine in the news, but originating from an October order), expanding Community Garden and nutritional assistance programs and spending on rat control technology: The city plans to spend an initial $50,000 on not just aboveground rat-zapping boxes like Somerville, but the same company’s sewer-system installations. A response from the city solicitor paves the way for ending fees for licensing, spaying and neutering for dogs owned by residents 70 and older, but calls for more information from the council before doing the same for lower-income residents.

Since spring began March 20, this meeting marks the end of the city’s snow season by asking $1.8 million to cover related expenses from the past months and its 55 inches of snow, four “plowing and snow removal events” and just below 20 salting runs, compared with asking $1.7 million last year after 45 inches of snow. There’s a proposal to buy five pieces of winter equipment for $915,000 – a large salter, front-end loader and three sidewalk/bike lane tractors – as opposed to the $650,000 requested for three pieces last year; and to spend $500,000 on snowstorm-related street repairs, as opposed to the $400,000 asked last year.

Two residents have written the council on deaths within the city: One of an unhoused man named Michael, who died Nov. 18, 2021, in a Bank of America entryway in Harvard Square, is taken as a sign of urgency in addressing homelessness in the city; another recalls a 25-year-old death in Porter Square and suggests safer road and bike-lane designs are long due.

Transportation and Public Utilities Committee, noon to 2 p.m. Tuesday. This committee run by city councillor Burhan Azeem plans to talk about changing zoning to eliminate parking minimums and maximums, meaning residences would no longer be required to include off-street parking. One-third of Cambridge households don’t need the parking and could do something else with the square footage, and without a requirement for parking spaces, the city could see more housing, Azeem says.

School Committee, 6 p.m. Tuesday. Items this week ask that free, year-round M7 CharlieCards be given to all upper- and high schoolers regardless of free- or reduced-price lunch status, with a bit of shade being thrown at how long it’s taken Cambridge to come around to the idea – noting, for instance, that Somerville’s school district is ahead of Cambridge on this despite having fewer affected students and a smaller budget ($99.6 million, compared with Cambridge’s $232.4 million). “Students are continually penalized for being tardy their first period regardless of transportation circumstances,” the order says. “Students deserve a safe and reliable means of transportation to and from school.”

Another order calls for e-transcript delivery services that let former students get a PDF of their grades to send to colleges, universities and employers without having to bother staff for a printed version. The agenda also holds a review of the Rindge School of Technical Arts, the high school’s vocational arm; and approval of a recommended budget for the next fiscal year. The committee meets in the Dr. Henrietta S. Attles Meeting Room at Cambridge Rindge and Latin School, 459 Broadway, Mid-Cambridge. Televised and watchable by Zoom video conferencing.

Planning Board, 6:30 p.m. Tuesday. Members will hear a plan to convert part of the Sacred Heart property at 49 6th St., East Cambridge, into affordable housing. The former convent, school and rectory could become 46 apartments for a range of resident incomes – remade under Affordable Housing Overlay zoning with restoration of historic facades and interiors, according to Preservation of Affordable Housing, a Boston nonprofit. In addition, the Vitality Bowls chain wants permission to sell its “acai bowls and other superfoods” in 923 square feet on the ground level of the Market Central building at 425 Massachusetts Ave., Central Square. It needs permission under the rules that try to keep out “formula businesses,” generally meaning fast-food joints, and owners say they will “develop unique and understated exterior signage unlike any other Vitality Bowls in the world” to try to stay low-key. (Somewhat wittily, the application includes photos showing that Central Square’s McDonald’s is virtually next door.) The chain has more than 100 locations but isn’t in Massachusetts yet; it’s seeking a Watertown location as well.

The board meets on the second floor of the City Hall Annex, 344 Broadway, Mid-Cambridge. Televised and watchable by Zoom video conferencing.

Ordinance Committee, 5:30 to 7:30 p.m. Wednesday. This committee run by city councillors Marc McGovern and Quinton Zondervan will look at adding a sustainable design and development law to city zoning. It would require developers to calculate the total greenhouse gas emissions created by the building. The committee meets at City Hall, 795 Massachusetts Ave., Central Square. Televised and watchable by Zoom video conferencing.

Community Meeting on Rodent Control & Prevention, 6 to 7:30 p.m. Wednesday. Controlling an ongoing and out-of-control rat problem is seen as so compelling to residents that the Department of Public Works, Inspectional Services Department and City Manager’s Office didn’t bother to offer a virtual-viewing option for this community meeting. City staff plan to share information on best practices to rodent-proof properties, answer questions from residents, provide updates about possible future technologies and explain a Private Property Rodent Control Program and how to apply. A flyer for this in-person event is here. The meeting will be be held at Cambridge Community Center, 5 Callender St., Riverside.

Ordinance Committee, 5:30 to 7:30 p.m. Thursday. This committee run by city councillors Marc McGovern and Quinton Zondervan picks up from March 6 the idea to stop construction of more office space and labs in the Alewife “Quad” area until planning begun some 40 years ago gets consideration. The committee meets at City Hall, 795 Massachusetts Ave., Central Square. Televised and watchable by Zoom video conferencing.