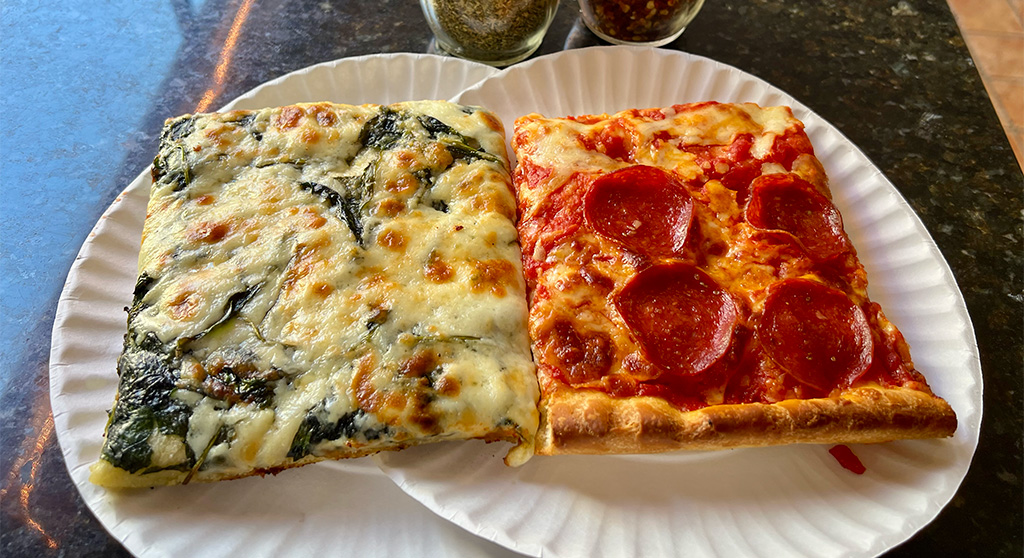 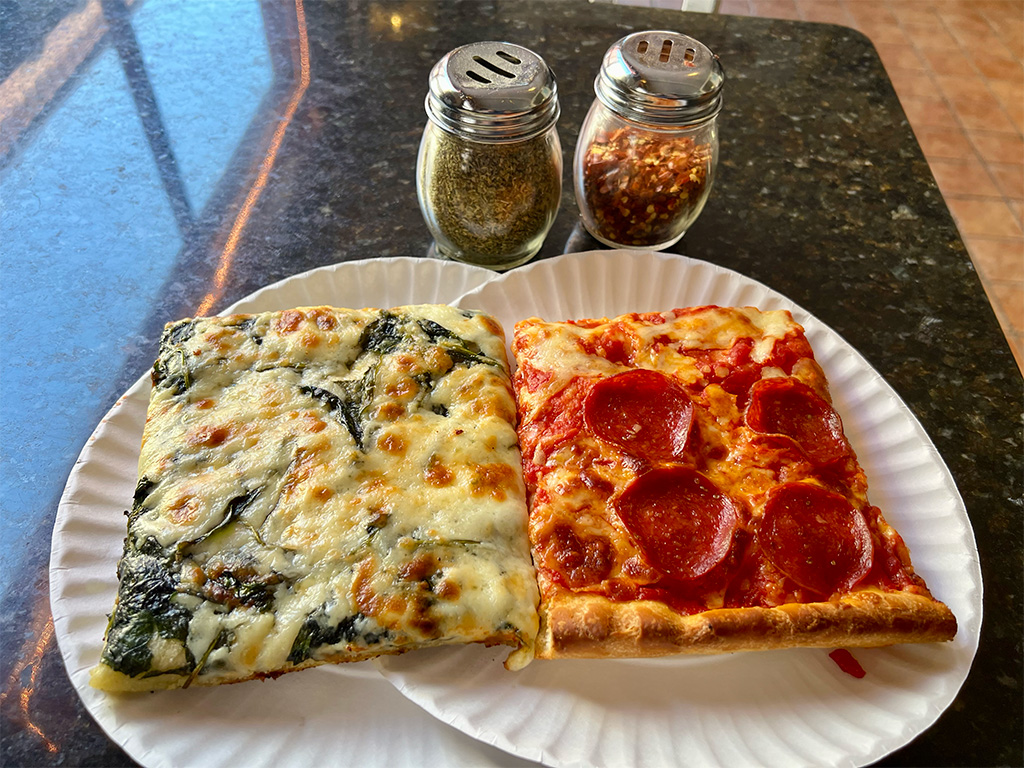 One of the fun things about writing this column is returning to old haunts and checking out old-school places you’ve strolled by a bazillion – and going in and getting their story. It’s been a long while since I’ve been inside Pinocchio’s Pizza & Subs, tucked quaintly away in a while alabaster cottage-esque facade at JFK and Winthrop streets, and that is definitively my loss. Since we’re doing a back-to-school series (last week it was Mike’s in Somerville’s Davis Square, for Tufts), we’re cuing up Pinocchio’s and their Sicilian style pizza for the Harvard crowd this week.

It’s pretty amazing when you consider Pinocchio’s has been a staple (and deal) since 1966, spanning four U.S. wars, six Harvard presidencies, Covid and a massive makeover of the square that has seen many of its cohorts such as the Tasty, the Wursthaus and the Bow & Arrow Pub disappear. There’s a retro cool factor when you walk into Pinocchio’s – you feel like you’re in something of a time capsule, with walls adorned with era-spanning memorabilia including a picture of the 1989 Harvard’s men hockey team, the only Crimson team to win the Frozen Four tourney, alongside press releases hailing Pinocchio’s longevity and square slices of Sicilian goodness. Even the website’s a bit of a retro dial back to classic pre-Internet-bubble HTML, and charmingly so. The space isn’t big; there’s maybe a half-dozen, intimate cafe tables with aluminum chairs and bar space in the window where you can perch and nosh down your slice of ’za.

Pinocchio’s does subs – the cheeseburger version is a college classic – but the place named after Geppetto’s wooden boy (the new live-action Disney flick with Tom Hanks is a bit of a letdown, for what it’s worth) is known for its square slices of doughy pizza. In origin, Sicilian pizza comes from Palermo and is referred to as “sfincione,” which means “thick sponge,” and that’s just what Pinocchio’s serves up: thick, spongy pieces of pizza that are light yet moist. You can order whole pies, but why bother when you can get fresh slices heated and good to go in seconds, with a ready selection or white, red, meat, no-meat and so on. At any given pop-in you’re likely to have the option of picking between at least six to eight options. On my last visit I had the basic pepperoni, thick and airy with the cured meat not overcooked as often happens, and a sweet and tangy sauce oozing out from under a generous topping of melted mozzarella. It reminded me some of the (very good) Detroit-styled pizza at Avenue Kitchen + Bar in Somerville, but with a lighter touch. For my second slice I went for a white offering of spinach, onion and garlic, and while I am not a big white pizza guy, I could really taste the spinach against the mozzarella and garlic; it almost made me want to go for a three-play, as there was a red pepper, spinach and mushroom tray on display too. 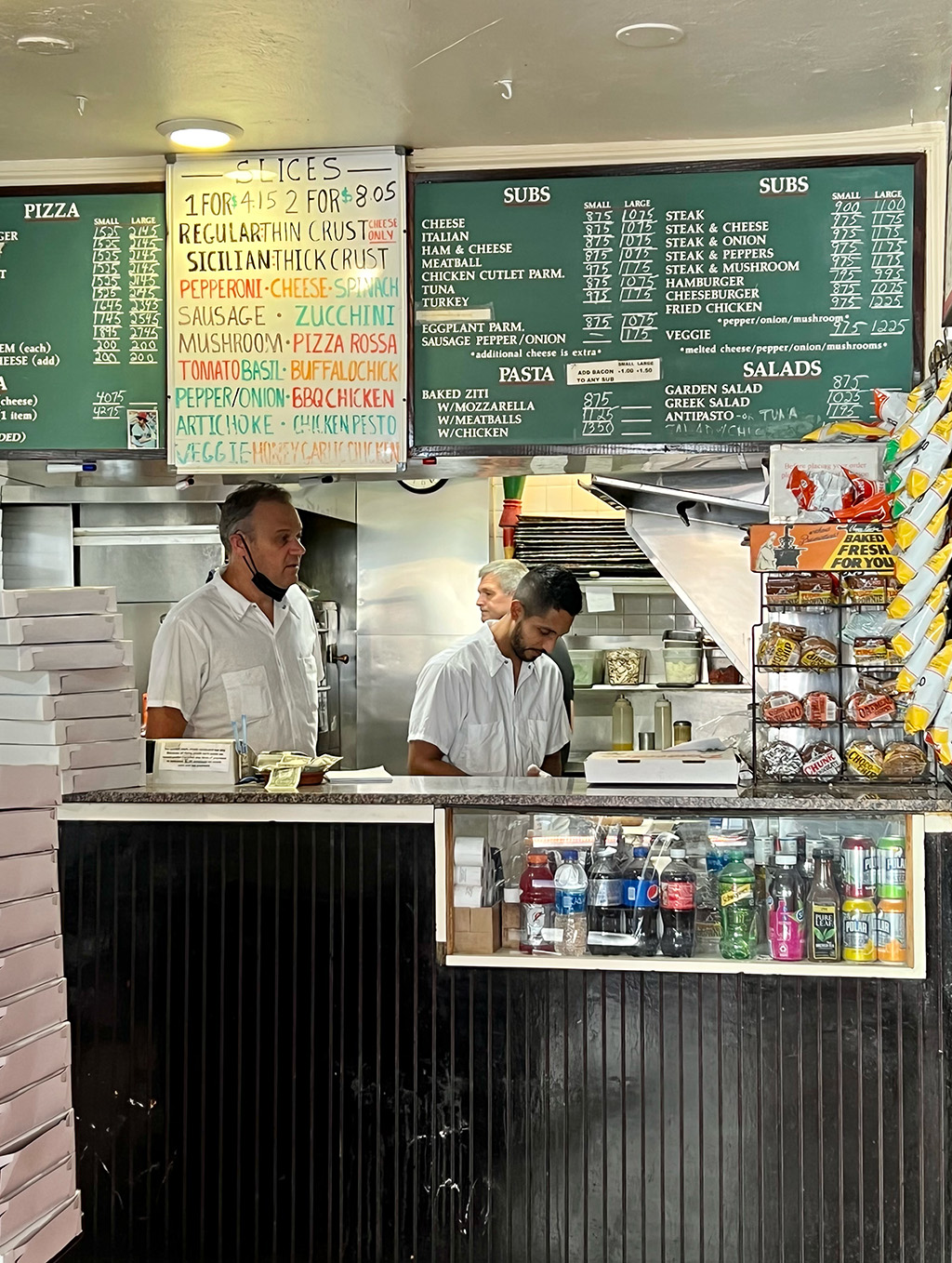 Pinocchio’s has been a staple in Harvard Square since 1966. (Photo: Tom Meek)

At Pinocchio’s, every diner seems satiated and happy and everyone behind the counter seems to have a jocular camaraderie and a desire to interact with their clientele. It’s intimate, almost familylike, and it’s open late, too. Here’s to another 60 years of spongy pies and late-night noshing.