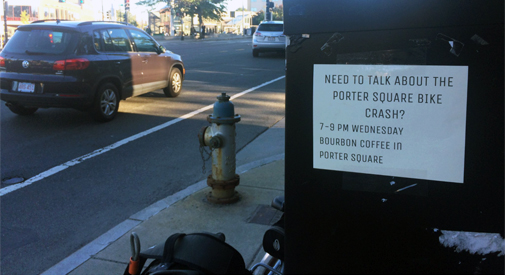 Sadly, this is the second time in a little over three months that I’m writing about the hazardous state of cycling in Cambridge, Boston and the surrounding areas – now after the death of Bernard Lavins, 60, who was dragged under an 18-wheeler in Porter Square this week. In June, Amanda Phillips was doored in Inman Square and killed by a passing lawn service truck. Both came after the conclusion of Bike Month, when I submitted a passionate callout of municipalities for their slack and slow response to perilous hot zones outlined in letters submitted to the respective transportation departments requesting their attention before something tragic happened.

After Phillips’ fatality, the city quickly dropped in bright turf-green bike lanes in Inman Square, showing cyclists the prescribed (and assumed safe) way through the tangled five-way intersection and alerting drivers where to expect cyclists to be; now Porter Square will get a similar redress. For Phillips and Lavins, these changes are too little, too late. There two squares have been long-known areas of concern, not because of mine or any other cyclist’s bleatings, but because it’s obvious – evidenced by the comments of Joseph Barr, the city’s director of traffic, parking and transportation, in the Boston Globe yesterday: “We know Inman Square and Porter Square as problem locations, and we are working on them.”

I can attest to Barr’s genuine earnestness and concern. But the problem is more than just one square, or even the city; it’s about having a unified plan to make biking safe alternative transportation in our urban landscape, and it’s something that needs to be done across the board. Vision Zero is a great goal to pursue within a community, but what good is it if a commuter leaving their Seaport office is struck by a vehicle in Assembly Square? Bike advocacy groups need to step out and up and advocate across municipalities and agencies and lobby for safe commuting lines – and not be afraid to wrangle with town halls. Municipalities need to build out and ensure there is access safe enough for families to ride to the local grocery stores, and that kids are able to bike to school without fear of being blow off the road by a revving MBTA bus. It’s going to take time, money and vision, and the ability to work across agency borders and town lines.

More immediate things that can be done:

Work with the MBTA to have bus drivers handle their vehicles less aggressively.

The bigger effort, however, will be to raise awareness and change attitudes. Car drivers need to see cyclists as part of the road and yield to them, and cyclists in turn need to be civil ambassadors of their right to the road and their safe passage. Separating and protecting bike infrastructure is wonderful idea, but this is old Boston, where cow paths have been spun into freeways. Unless lanes or parking spaces are annexed, road real estate will remain tight and extremely limited.

Signs all around #PorterSquare. All welcome to gather tonight to talk & grieve today's horrible crash. Many witnesses. It's better together pic.twitter.com/pAPeTzuRnI

As a result of Wednesday’s accident there are likely to be fewer cyclists on the road. Two fatalities in three months in a town regularly ranked as one of the best urban areas for bikes in the country can understandably breed fear. My wife even asked me to reconsider my mode of transportation – one that has my primary means to get around for more than 30 years.

Something needs to be done – and something different – because the course we’re on now clearly isn’t it. It won’t come fast, and it’s going to take committed people and resources. For the betterment of our city, the environment and people’s overall well-being, it’s something we all need to embrace. Incentives need to be laid down to get people out of their cars, and cyclists need to feel safe on the road. It’s that simple. Until then, all talk is just spin, and more lives will be at risk.