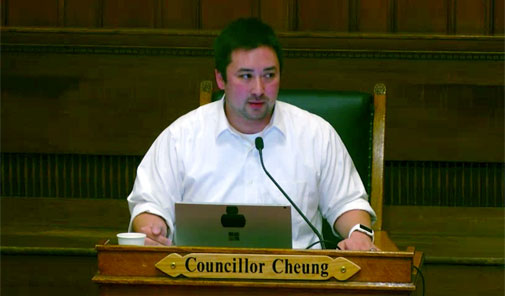 Given a second chance to put a nonbinding question about public campaign financing on November’s municipal ballot, the City Council instead decided – after more than an hour of angry debate and often thinly veiled personal attacks – to have the City Manager’s Office look at public financing options and report back.

After hearing the City Manager’s Office has had a similar order since Oct. 31 without taking action on it, the council took the unusual step of ordering a response by the end of next month.

“I don’t want to leave the timing open-ended, because I don’t think that will give people the confidence that we’re actually going to do it,” said vice mayor Marc McGovern, who suggested the deadline after councillor Leland Cheung had proposed only that the city manager appoint a committee to report to the council “with all due haste.”

City Manager Louis A. DePasquale took office Nov. 14, almost immediately after the original order would have been sent to his office. In late November, Cheung proposed wiping the slate of awaited reports clean for DePasquale, but the vote went against the idea, 7-2.

A group called Cambridge Residents for Responsible Elections petitioned to get the nonbinding question on the Nov. 7 ballot to ask whether residents were interested in adopting public financing of elections for Cambridge, rather than leaving candidates to raise money for their own runs, arguing that “many Cantabrigians have expressed concern over what they perceive to be the undue influence of a few wealthy donors and special-interest groups on municipal elections. Such concerns have the potential to erode the people’s confidence in their elected officials and reduce civic engagement.”

At least $651,663 was spent in the City Council race two years ago, an increase of about 20 percent from the 2013 election year, despite there being fewer candidates running and a few who made a point of spending no money to seek office. While the average amount spent per vote rose by 14.6 percent, to $38.81 from $33.88, the number of voters dropped from 2013.

Taking offense at the petition’s language, which he considered “fear mongering” about nonexistent corruption, Cheung used his charter right as a councillor Aug. 7 to delay the citizens’ petition by a single meeting. Since he did so at the only council meeting of the summer, it was believed the move would delay reconsideration past the deadline for putting a question on the ballot. But it was discovered by the Election Commission that the council itself had more time to put a question on the ballot, which gave the petition new life – at least, briefly, until councillors’ objections were spoken.

Their objections weren’t new. Despite the expense of elections, several councillors were vehemently against a proposed “clean election” order back in February 2015, saying it suggested they were beholden to special interests and corrupt.

A second attempt led by councillor Nadeem Mazen’s Neighborhood & Long-Term Planning Committee led to the October policy order, which languished on the city manager’s desk amid other priorities.

“We’re disappointed this topic is once again going to the city manager for study,” said Anne Taylor, spokeswoman for Cambridge Residents for Responsible Elections. “While we look forward to the city manager’s analysis, we will continue to push for council members who are willing to take action, rather than delay.”

Councillors’ biggest practical concerns with the citizens’ petition language were that voters would overwhelmingly approve the concept of publicly funded elections without understanding taxpayers would be footing the bill. Some councillors expressed concerns that funds would go to candidates who weren’t serious about pursuing public office, or that the funds would be used by candidates for frivolous expenses.

Cheung called the bare ballot question “a recipe for insanity” and insisted that rather than “something that’s wishy-washy, feel-goody [and would be] kind of holding the council hostage,” an entire public process was needed in its place – leading him to submit the motion later in the meeting to move responsibility to the city manager. Councillor Tim Toomey agreed said that, in terms of election spending details, “we have to lay the framework of this initiative in the ballot question so people know” what they’re voting for.

Perhaps the most surprising charge was that the ballot question – which is explicitly about politics and targeted at Cambridge voters who will be at the polls for the Nov. 7 ballot – was brought in “at the last second,” as Cheung said, and “just playing politics.” He was disturbed that people running for the council in November had signed the petition.

Much of what councillors said, including councillor Craig Kelley agreeing with Cheung about the timing and that “this was brought up before and didn’t go very far. That doesn’t mean [a proponent] stops working on the issue” – suggested they had forgotten that council discussion had ended because it had culminated in an order to the city manager asking for exactly the advice they sought now.

In fact, when councillor Jan Devereux reminded the council it had been waiting for a response for more than 10 months, she noted that she’d just been reminded of the fact herself by a member of the public.

Toomey had an alternative campaign funding proposal Monday asking the city manager to establish an “official” voluntary pledge program restricting candidate fundraising and spending. Coming up on the agenda after an hour and a half of debate about publicly funded campaigns, it was moved to committee without discussion. “I sort of think we’ve talked this thing to death tonight,” Kelley said.