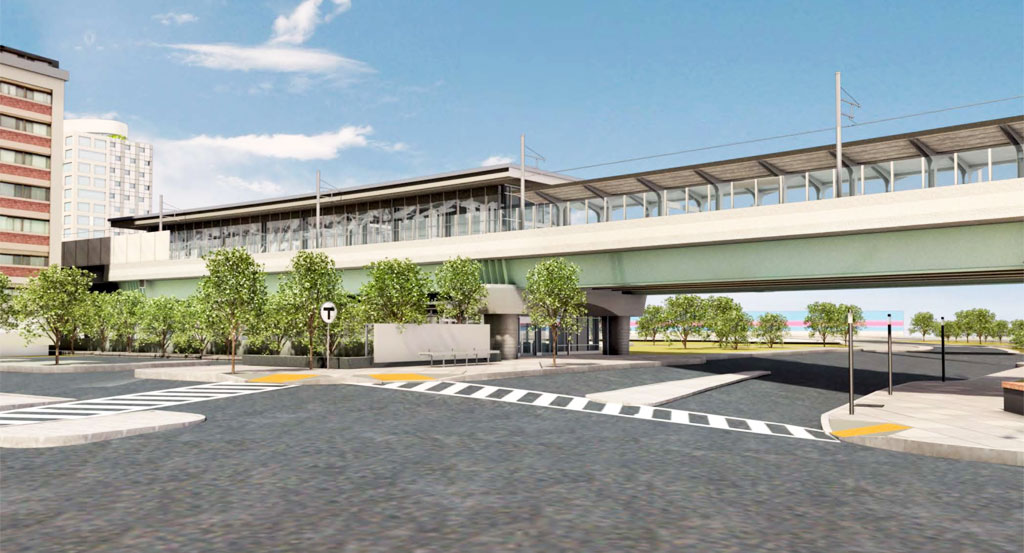 The relocated Lechmere station on the green line, as envisioned in 2014. (Image: Green Line Extension Project)

As the city approved its first $5 million payment Monday toward building the MBTA green line extension – part of an unprecedented $75 million buy-in by Cambridge and Somerville to a state project – at least two city councillors suggested that more aggressive moves on transit should result.

Councillor Quinton Zondervan, with his eye on Alewife and the potential for a commuter rail stop to serve its fast-growing industry and population, asked whether the city would consider again funding transit infrastructure “that we need that otherwise may not happen.”

“I would never say never,” City Manager Louis A. DePasquale said, though the $25 million to which Cambridge has committed for the green line – half coming from DivcoWest, the developer of the 45-acre Cambridge Crossing neighborhood – had been intended as an “incredibly unusual” bailout.

“It’s clearly an area where I don’t want to set expectations,” DePasquale said. “But … if the right thing to do is to fund something that benefits the city, even though it’s traditionally not something the city has funded, shame on all of us if we don’t seriously consider it.”

In fact, state transit officials have shifted their position slightly on a potential Alewife commuter rail stop, said Iram Farooq, assistant city manager for community development: In the past, it used to be about there being not enough ridership, and that’s shifted to concerns over cost and how it might affect schedules down the line. The next stops on the line in either direction would be Belmont and Porter Square – and then a terminus at North Station in Boston.

It was concerns over cost on the green line extension that had councillor Dennis Carlone shaking his head Monday over what Cambridge gave up at its Lechmere station, despite riding to the rescue on the plan to lay track and build seven stops into Somerville and Medford. The light rail extension, expected to benefit 50,000 riders, took shape in 2009 as a project stretching to Route 16 and costing $600 million to $1 billion. As recently as 2014, the state thought two stops would open in 2017 and the other five would open in 2020.

The entire project looked doomed in 2015 by news that costs had ballooned by up to $1 billion more than anticipated. The renewed project, with money from Cambridge, DivcoWest and Somerville, helped revive the project with stations stripped of amenities – like trolley stops far to the south that leave riders exposed to rain, snow and cold. Even DivcoWest’s Lechmere stop, which will be relocated closer to Cambridge Crossing and leave a space known as Lechmere Square for new homes, retail and possibly a hotel, is to have scant amenities compared with what was once imagined.

The whole first phase of the project is expected to be finished Dec. 10, 2021, with some amenities – platform canopies, some elevators and public art, for instance – returned to plans by a low bid for the whole project and advocacy from the cities’ legislative delegations.

“As much as I’m for this city [granting the $25 million], our influence on the station was, from a design point of view, minimal,” said Carlone, who helped shape East Cambridge during his career as an urban planner and designer. “I just want to repeat briefly my comments – and they were not utilized at all in the last session – that this station does nothing, doesn’t respect Lechmere Square. It’s a kit of parts that has nothing to do with Cambridge.”

“I said, at least design it so it can be enclosed in the future – who knows where that money will come from, maybe it comes from the city, or that there be a respectable waiting area that orients itself to Lechmere Square, which was the design in the 1980s,” he said.

The suggestion was ignored, along with the plea to make the design connect better to East Cambridge, “and I realize that’s water under the bridge, but it should have been a condition of the money that we gave,” Carlone said.

Farooq, however, wasn’t sure Cambridge’s $25 million bought increased bargaining power, especially on designs being done before the deal was raised in May 2016 and locked in seven months later. “It’s maybe worth having another discussion, but I don’t know that the money given for the green line extension has changed much … I don’t know that [the state Department of Transportation] will concur that they owe us something,” she said. “They feel like they’re delivering what they owe us.”

Significantly more money – $150 million in federal funding intended for a second-phase extension of the green line to Route 16 – was diverted back to save the first phase by the Boston Region Metropolitan Planning Organization. And the organization said it expects to program $2.9 billion in federal highway funds over the next quarter-century for transportation infrastructure projects and programs, similarly overshadowing any contribution even Cambridge might make. (Farooq’s department is helping get responses on a survey shaping long-range transit needs.)

Cambridge’s first financial contribution for the green line extension is due March 1, with subsequent, equal contributions due Nov. 1 for each of the following four years. DePasquale said the cities had made their commitments to millions of dollars “flat,” and that potential cost overruns were expected to be fully the state’s responsibility.

While the city might not have leverage over the state from contributing millions for the green line extension, “it’s certainly bought us goodwill, and we should continue to use that goodwill,” Farooq said.

How much it will help “remains to be seen,” she said.