‘Deadpool 2’: Everything is bigger this time, matching his mouth, but not quite as fresh 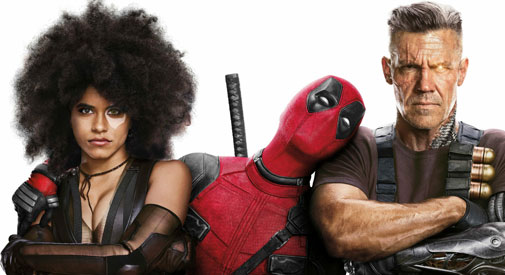 ‘Deadpool 2’: Everything is bigger this time, matching his mouth, but not quite as fresh

“Deadpool” is back, and with all the irreverence of the last silly slap. But where the original was so uproariously self-deprecating, scintillatingly scatological and fresher than a boatload of day scallops, the part deux follow-up feels more like daily gruel. That’s something of a deeper disappointment because it’s helmed by stunt-dude turned action director David Leitch, who scored big with “John Wick” (2014) and “Atomic Blonde” (2017), but here seems content to simply extenuate what came before. The same happened with fellow Marvel upstart “Guardians of the Galaxy” (it’s from the Marvel Comics Universe under Disney, versus 20th Century Fox and Marvel Entertainment doing “Deadpool” and “X-Men”) and its sequel, a clear issue with the genre – brand something in a new and ingenious way, get the fans fired up and then keep feeding them what they know and desire until they gag on it. Then it’s back to the drawing board for a reboot or the next super franchise idea.

“DP 2” opens with the same cheeky, industry-skewering credits – you know, “Directed by a Hollywood Hack” and “Produced by some Asshats” (those from the 2016 Tim Miller original, to give you a taste). Shortly thereafter, the wit and verve feels noticeably off. The dial’s set at a nine when it needs to be cranked up to 11. Ryan Reynolds, returning as the titled anti-superhero whose superpower is eternal regeneration (you can’t kill this mother, though his flame-scarred face never gets close to the actor’s natural comeliness) is game, coming in full throttle with incessant wisecracking asides to the audience amped up even more by a pickled peppering of other Marvel superheroes – Logan and Thor among the comic casualties.  There’s also a lot more activity in this one: X-Men sidekicks Negasonic Teenage Warhead (Brianna Hildebrand) and chrome titan Colossus (the CGI rendering voiced by Stefan Kapicic) are back, but after a failed stint as an X-Man trainee (a running joke that runs on a bit too long) Deadpool turns to a crew of LinkedIn-recruited heroes with monikers such as Bedlam (Terry Crews), Zeitgeist (Bill Skarsgard), Shatterstar (Lewis Tan) and a dude named Peter (Rob Delaney) whose superpower is a perfectly groomed mustache and a catfished headshot used to garner a spot on the team. How the team pans out – or doesn’t – is the film’s finest moment, though it does remain an ongoing pleasure to see Domino (fresh face Zazie Beetz), whose super-skill is luck constantly avoid certain doom as buses and buildings crash down around her. The rest of the mortal gang from the original “DP” are back too, but all take a way, way back to the core thread of a Terminator-esque entity (part man, part machine) from the future named Cable (Josh Brolin) who’s come back to hunt down his own John Connor, a portly mutant boy named Russell (Julian Dennison) who harbors anger issues and has fiery fist that can blast holes in the side of a buildings.

There’s even more to “DP 2” than that, and just like distant Marvel cousin “Avengers: Infinity War” (a Disney property like “Guardians”), the glut of personality and super power that fills the screen almost becomes too much to bear. The posters for the films even look identical, with a crowded clustering of chiseled super-beings clad in uber-tight Lycra and Brolin (Thanos in “Infinity”) front and center as the baddie looking to unleash Earth-ending chaos. More ironic still is the notion that it could be “Deadpool 2” that knocks “Infinity War” from its three-week box office perch. Given all that, one has to wonder if there’s any end to superhero cinematic domination in sight? Not this summer, and it’s dour realization that Deadpool, once free and fresh, is now getting dressed up for bigger, wider audiences; acerbic takes on “Flashdance” and James Bond are among the few nuggets of the old flash that feel destined to fade as Deadpool, the franchise, becomes more a product and a team effort.