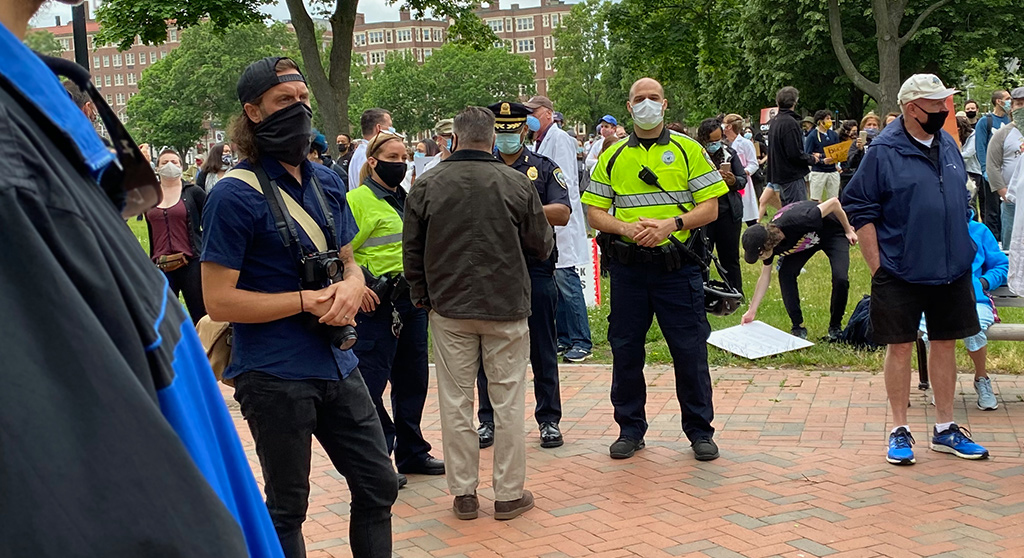 By Sue Reinert and Marc Levy 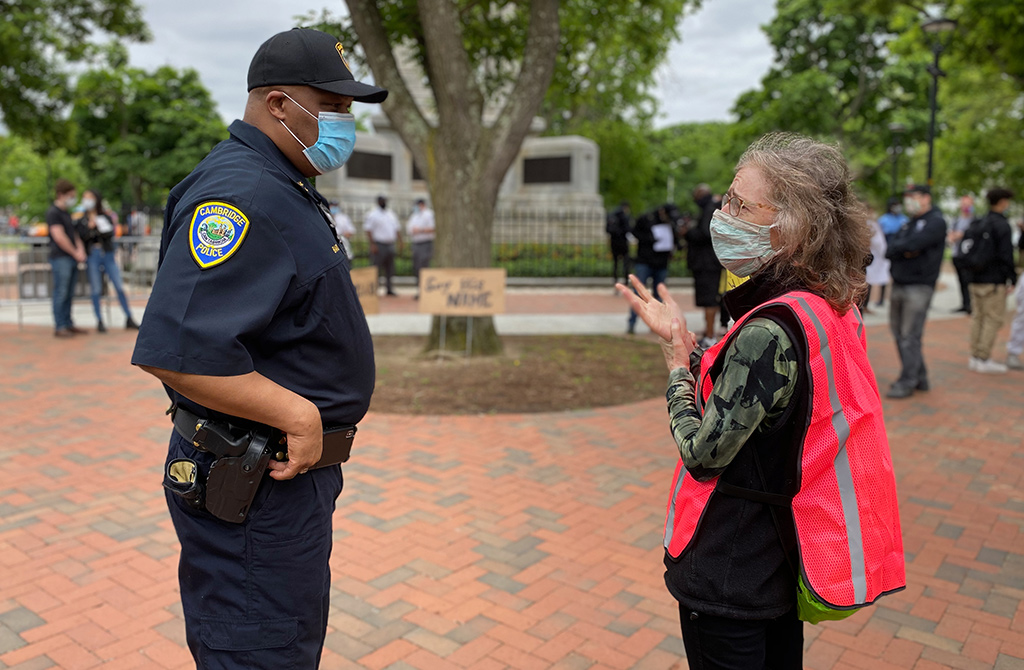 A 16-member task force will look into how the city could move some police functions to other departments, it was announced Wednesday at a meeting of the City Council’s Public Safety Committee. The meeting was about the Cambridge Police Department’s inventory list and the degree to which it includes military-style equipment.

But city councillors cannot decide – or limit – what weapons the department uses, according to an opinion supplied Wednesday by the city’s Law Department. “The authority to dictate what weapons are used by officials when carrying out their official duties rests with the city manager and not with the City Council,” according to the finding as read during the committee meeting. “An ordinance restricting police officers from carrying assault weapons would thus be invalid.” The opinion had been requested just a day earlier, city solicitor Nancy Glowa said.

When councillor Jivan Sobrinho-Wheeler told Glowa that Boston had approved a ban on tear gas, and asked why Cambridge could not do the same, she said she would have to do some more research. At another point she said the issue of council control) was open “for further analysis.”

Sobrinho-Wheeler struggled to understand why the council sets policies and even specific limitations on surveillance technology in Cambridge, but is not able to do the same for police weapons. The discussion suggested that councillors may not be satisfied with Glowa’s interpretation of the law.

Some of the same concerns were heard from some of the 56 listed speakers during a public comment period, including people identifying themselves as military veterans and former police officers. Most were unhappy about the department’s heavier weaponry, answering of calls for social service-type problems or both, though councillor E. Denise Simmons reminded those attending that they should speak only to the topic of the meeting: police inventory issues.

“Is important to our city’s police mission to divest themselves of inappropriate weaponry. The police have been placed in too many roles in the city. And not only is it difficult for the citizens, it’s unfair to the police,” said Jessica Schmidt, who described herself as a U.S. Army veteran. “Military weaponry is designed to kill … it is possible to subdue violence, including that of those who are holding firearms, without using military weaponry.” 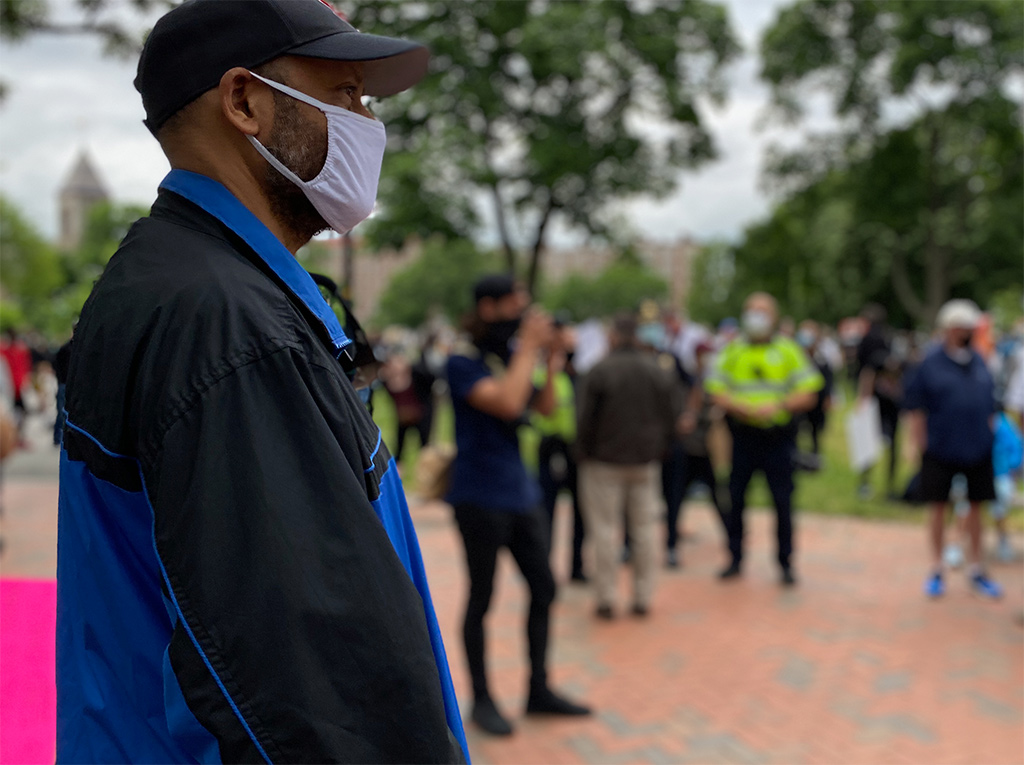 City councillor Quinton Zondervan at the June 7 protest, with police in the background. (Photo: Marc Levy)

Johnson and others connected Wednesday’s discussion in Cambridge with the mob of rioters invading the U.S. Capitol the same day in what could be described as an attempted coup to keep President Donald Trump in power. “Too many officers align too often with vigilantes, seditionists and would-be traitors and use excess force themselves,” Johnson said.

Michael Daniliuk, a 24-year Cambridge police officer, defended the use of military-grade equipment with a reminder of the Boston Marathon bombing and subsequent spree of violence during the hunt for Dzhokhar and Tamerlan Tsarnaev in 2013.

“Two people from our community in Cambridge set off bombs in Boston. And then the chase that got them captured started here in Cambridge, and during that Chase, while Cambridge police officers were chasing them over the bridge into Watertown, they were throwing bombs at police cars that have no armor,” Daniliuk said. “The fact that we got the BearCat [armored vehicle] after that just proves that if you use it the right way, there’s need for it. I would have been much more comfortable in an armored vehicle chasing when they were throwing the bombs.”

The conversations first arose during the summer amid Black Lives Matter activism, including calls to defund the police and put more resources into social services. The task force looking at reallocating resources will be headed by councillors Marc McGovern and Simmons, who have been broadly supportive of the department’s approach to policing the city in the face of more radical calls for change from councillors Sobrinho-Wheeler and Quinton Zondervan, the chair of the Public Safety Committee.

Sobrinho-Wheeler and Zondervan called in June for redirecting $4.1 million from police funding toward public health and safety measures. Councillors agreed to a $2.5 million compromise from the city manager to freeze police hiring and instead prioritize hiring for human services needs in the next fiscal year. Simmons had not seemed aboard with the idea, and stalled a police equipment inventory because she thought it was more valuable to be “examining the entire municipal body.”

When Sobrinho-Wheeler and Zondervan called for a look at the latest annual inventory of that police equipment, it was discovered that one had never been done. The law calling for the inventory “was enacted prior to 1990,” police commissioner Branville G. Bard Jr. said July 22, but “there is no record of a previous submission of this type within the department archives.”

Before turning in the first inventory – which did not include “duty gear already issued” such as officers’ pepper spray canisters – Bard said June 10 that “We don’t get military equipment. We don’t have any – at all. We don’t have tanks, we don’t have anything like that.” After presenting an inventory including M4 rifles, an armored vehicle, grenades and camouflage uniforms, Bard explained that he “would never play semantic games with the council. When I said the department does not possess military materials, I mean it in the context that we do not possess materials that are restricted only to the military by law, and therefore exempted to civilian law enforcement.” Also, he said, the department doesn’t participate in the so-called 1033 Program that gives military equipment to law enforcement agencies.