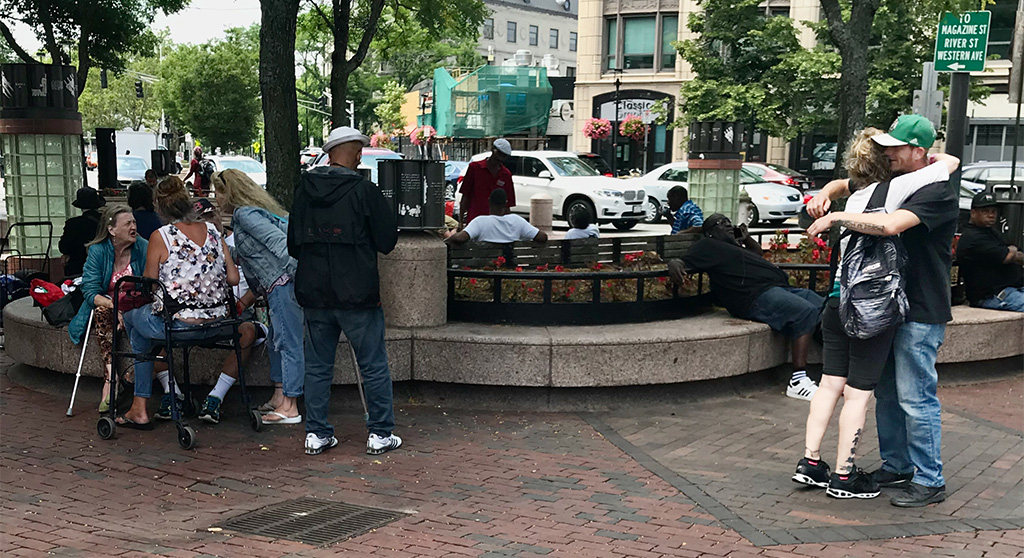 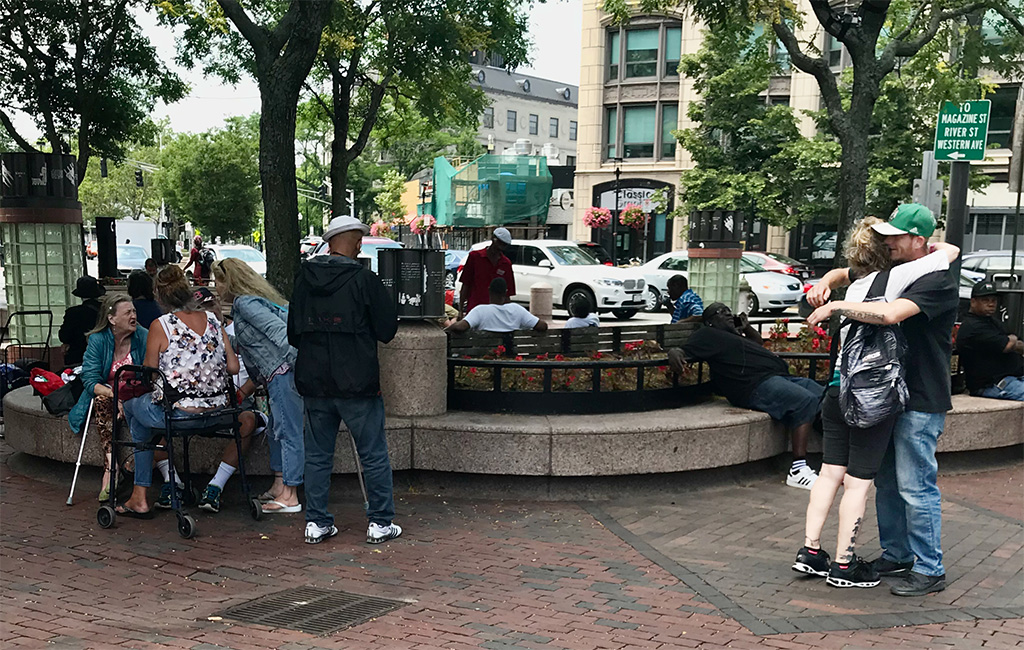 Carl Barron Plaza, seen in July 2018, is a gathering place for the unhoused and lower-income residents. (Photo: Marc Levy)

City Council, 5:30 p.m. Monday. Saying they’ve been excluded from giving input on remaking Carl Barron Plaza in Central Square, a group of mainly unhoused people have submitted their own list of suggestions. These range from making an Amazon pickup site’s doors open inward to avoid hitting people to adding stations for charging phones, heating food, washing hands and filling water bottles – in large part, making the plaza friendlier to the unhoused rather than more hostile, which is what they suspect is behind a proposal that would eliminate much of its seating. The plaza provides a “place to go and interact and socialize with … friends and community members for free. There are very few places in Cambridge that allow us to do that,” the petitioners say, finding sympathetic ears among councillors who want a committee hearing to look at the ideas.

Transportation-themed issues are also prominent, including a call to take payment from owners of electric cars for the power they use at city recharging spots but not also for parking there. The dual fees are unique to Cambridge, and some councillors would prefer to follow the example of Somerville, Boston and Brookline and take money for just one use so that Cambridge will stop “lagging behind its neighbors in terms of increasing accessibility and equity for EV owners and incentivizing others to purchase or otherwise use electric vehicles.” According to other policy proposals, traffic accidents involving pedestrians or bicyclists should be reported to residents in real time as they are to councillors, according to another policy order, and the the Harvard Bridge should get devoted lanes and separated bike infrastructure, and closing off parts of Memorial Drive on weekends to create the recreation space known as Riverbend Park should continue beyond mid-November.

Conservation Commission, 7 p.m. Monday. The panel will review a wetlands permit application from IQHQ seeking “redevelopment and restoration” of its property at 1 Alewife Center as life sciences offices and labs. The developer’s property in the Alewife flood plain includes Jerry’s Pond, a fenced-in, polluted former swimming hole previously owned by the W.R. Grace chemical company that has become a wildlife habitat. Watchable by Zoom video conferencing.

Planning Board, 6:30 p.m. Tuesday. The board plans to discuss a Western Front cannabis retail store for 98 Winthrop St., Harvard Square, another venture by Marvin Gilmore (former owner of Cambridge’s Western Front nightclub), former Cambridge vice mayor Dennis Benzan (of La Fábrica Central restaurant and nightclub) and Omowale Moses. The partners are open in Chelsea and are preparing to open at 567 Massachusetts Ave., Central Square. This Harvard Square site was the Healthy Pharms medical marijuana dispensary for less than a year until a lawsuit from the owner of the neighboring Crimson Galeria forced its closing in March 2018 – part of why Cambridge now has only Revolutionary Clinics selling pot for patients, albeit in two locations. (Now Galeria owner Raj Dhanda is gearing up to host his own recreational cannabis franchise with three other members of the Moses family.) There’s also a nonbinding Affordable Housing Overlay design review scheduled for a mixed-use project by Just-A-Start at 52 New St., Neighborhood 9 near Fresh Pond. The developer plans 107 apartments and 3,000 square feet of commercial space. Watchable by Zoom video conferencing.