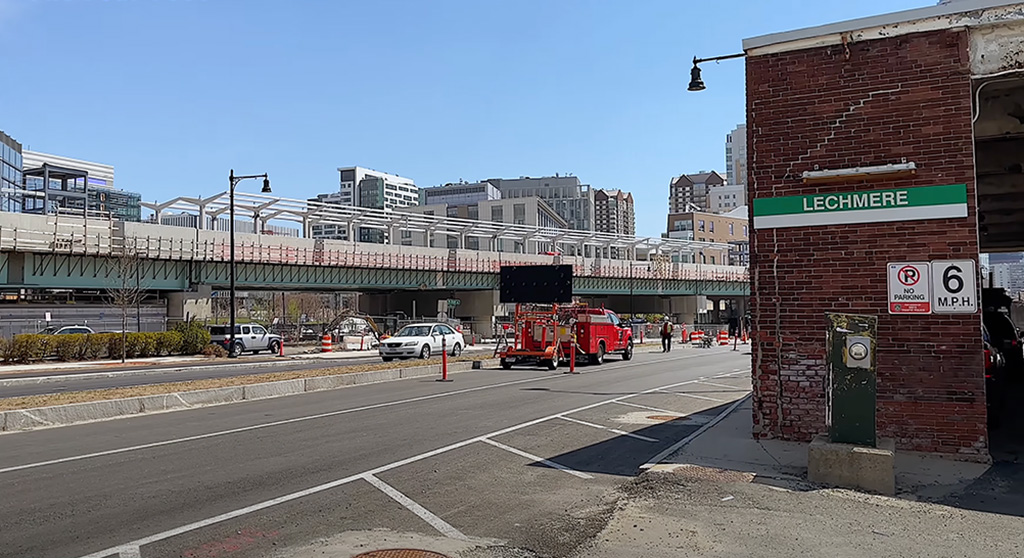 The raised Lechmere station being built as part of the MBTA’s green line extension takes shape across from the old station in a screen capture from a video by The Four Foot.

Money being returned by the MBTA should be directed right back at improving mass transit in Cambridge, especially where it makes up for the state agency’s deficiencies, residents and city councillors said Monday.

Returning features to a stripped T station, improving bus stops, expanding bus service hours and trying fare-free rides were all ideas heard Monday at a council meeting, which came just days after state transportation officials said they would have to cut train and bus service starting Sunday because of a lack of drivers and other staff.

“If we don’t act decisively to restore and increase the frequency, we will be in a worse position later,” councillor Patty Nolan said. “If it is not more frequent and free, fewer people are going to use it, and we’ll be in this cycle of feeling that public transit cannot serve our needs.”

With federal American Rescue Plan Act money coming in, the green line extension project no longer needs $25 million committed by Cambridge in May 2016 – half of which came from DivcoWest, the developer of Cambridge Crossing in North Point – or $50 million from Somerville. Instead, the project looks on track to finish with a $58.6 million surplus.

The return of $12.5 million to the city could go right back to improving transit, councillor Jivan Sobrinho-Wheeler suggested in a policy order discussed Monday. He also wants the city to ask DivcoWest to reallocate its reimbursement back to mass transit improvements, at least in a way that benefits East Cambridge.

Thirty years in the making

Green line extension plans date back to 1991 but were rebooted by a 2005 lawsuit that described extending the green line to Route 16, with the first stops opening in 2015. None were built by then, and instead the project looked doomed as costs ballooned by up to $1 billion. The $75 million from Cambridge and Somerville was part of keeping a pared-down project going.

Now instead of getting to Route 16, the final stop is at Tufts University. Another part of the cure was to strip stations of their amenities, including the Lechmere stop losing its enclosed shelter – despite the station being amid handsome new development at Cambridge Crossing, where it is moving from across Monsignor O’Brien Highway. (The space being left behind, known as Lechmere Square, has been pitched as becoming new homes, retail and possibly a hotel.)

“It’s great that these stations are coming in under budget, but I am not surprised because [Lechmere will be] a minimal station – the most minimal in our city, and in some ways in the whole system,” councillor Dennis Carlone said.

East Cambridge resident Heather Hoffman said the history of the green line extension was to “take service away from East Cambridge,” and that the city had been absent in protecting its residents. While the old, ground-level Lechmere station has an enclosure, the new one is raised and has only a roof, exposing waiting riders to wind in addition to cold, rain and snow. “You like to talk about subways in order to make the case for more and more and more development. How about providing something good for us?” Hoffman asked councillors.

Another speaker, James Williamson, also proposed better shelter being returned to the design of Lechmere station, though he had a suggestion for the returned MBTA money that had less to do with mass transit: giving it to Massachusetts Avenue businesses losing customers as parking spaces are used for bike lanes and dedicated bus lanes.

Carlone agreed with the speakers about the enclosed shelter, and said the returned money could go to improving access to Lechmere from East Cambridge. That goal was shared with councillor E. Denise Simmons, who said she had been “verklempt at the way it seemed to have made it more difficult from people from East Cambridge to access a station that’s supposed to be encouraging people to use public transportation.”

Money should be spent to improve access to stations especially for people with physical impairments, Simmons said, and possibly to heat bus shelters around the city. Sobrinho-Wheeler’s initial suggestions included extended bus-only lanes and signal priority technologies for high-traffic corridors, such as Route 1 or Route 76 along Massachusetts Avenue; expansions of existing fare discount programs to low-income Cambridge residents; a test of fare-free bus routes, perhaps starting with the 68 and 69; and 24-hour service on key routes. (“How about having some 69 buses at all? We get one bus on Sunday,” Hoffman noted.)

The first hurdle is one of political will. If money is returned to the city, it goes into the general account, Carlone said. The city manager must be convinced to earmark it for transit improvements.

The $25 million commitment inspired calls years ago from Carlone and councillor Quinton Zondervan for the city to get more aggressive around transit.

“I would never say never,” City Manager Louis A. DePasquale told them in January 2018, when the focus was on a pedestrian bridge over train tracks by the Alewife T station. “It’s clearly an area where I don’t want to set expectations. But … if the right thing to do is to fund something that benefits the city, even though it’s traditionally not something the city has funded, shame on all of us if we don’t seriously consider it.”