As a ‘Predator’ pre-prequel, ‘Prey’ leads pack; ‘Lost Highway’ is a rep gem, and Hitch is back 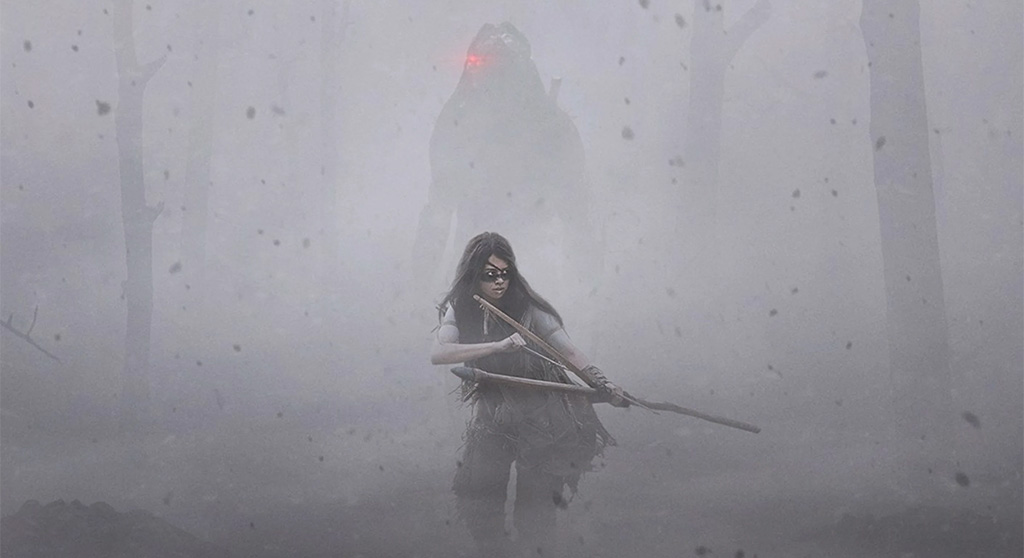 As a ‘Predator’ pre-prequel, ‘Prey’ leads pack; ‘Lost Highway’ is a rep gem, and Hitch is back

More film fixtures from the 1970s left us last week, including Royal Shakespeare Co.-trained actor David Warner and film producer-director Bob Rafelson. Warner, who has nearly 200 credits, played villains with panache, including Jack the Ripper in “Time After Time” (1979) and the archbaddies in “Tron” (1982) and “Time Bandits” (1981). Warner also played attendant to Billy Zane’s controlling beau in “Titanic” (1996) and appeared in two Sam Peckinpah films: as a righteous preacher in “The Ballad of Cable Hogue” (1970), Peckinpah’s follow-up to “The Wild Bunch” (1969); and as a mentally disturbed pedophile in the dark, disturbing, yet luridly alluring, “Straw Dogs” (1971).

As a producer, Rafelson was the force behind Davy Jones, Peter Tork and The Monkees. Other than the films he directed himself, he produced the Dennis Hopper classic “Easy Rider” (1969) as well as Peter Bogdanovich’s “The Last Picture Show” (1971), both detailing the ebb of the American Dream, and launched Jack Nicholson as a major Hollywood star of the era. Nicholson worked as an aide to Rafelson on “The Monkees” TV show, had a defining supporting role in “Easy Rider” and would make five pictures with Rafelson including the era-capturing “Five Easy Pieces” (1970), “The King of Marvin Gardens” (1972) and “Blood and Wine” (1996), which had Judy Davis, Jenifer Lopez and Michael Caine in the eclectic ensemble. Blending unlikely and far-reaching talents was something that came naturally to Rafelson. His first feature, “Head” (1968), was a trippy psychedelic potpourri built around The Monkees that also starred Annette Funicello, Ali boxing foe Sonny Liston, gridiron menace Ray Nitschke and Frank Zappa. In “Stay Hungry” (1974), a gym-based satire, he paired Sally Field and Jeff Bridges with newcomer Arnold Schwarzenegger. He made a trio of fatal-attraction flicks that were near misses (“The Postman Always Rings Twice,” “Man Trouble” and “Black Widow”) and the underappreciated “Mountains of the Moon” (1990) about the quest by Capt. Richard Burton (Patrick Bergin) and Lt. John Hanning Speke to find the source of the Nile. (Tom Meek)

The Judy Garland Centennial Celebration rolls on this week at The Brattle Theatre with a screening of “The Clock” (1945), directed by then husband Vincente Minnelli and marking Garland’s first non-singing role. Garland is a young woman who randomly meets and falls for a World War II soldier (Robert Walker) on leave in Penn Station; they have only 48 hours together – kind of “Before Sunrise” (1995) before there was “Before Sunrise.” The Brattle also kicks off its program celebrating the Independent Film Festival Boston’s 20th year by playing past festival hits. On Wednesday it’s the reality-bending “Petite Maman” (2021) from Céline Sciamma, whose deeply internal “Portrait of a Lady on Fire” (2019) was made a Fall Focus showcase by the IFFB. For a “Midnighters” series, there’s Derek Jarman’s “Jubilee” (1978), in which Queen Elizabeth travels 400 years into the future to see London run by a gang of guerrilla girls with pop-punker Adam Ant and era new wave princess Toyah Willcox, now famous for her “Toyah and Robert’s Sunday Lunch” videos. It plays Thursday along with the 1975 cosplay cult classic that needs no introduction, “The Rocky Horror Picture Show.” In that vein, The Brattle hosts an extended run (starting Friday) of the stop-motion-animated “Mad God” from special effects innovator Phil Tippett (“Jurassic Park,” “Robocop”). The dystopian futuristic steampunk vision stars filmmaker Alex Cox (“Sid and Nancy,” “Repo Man”) as the Last Human and took Tippett nearly 35 years to complete.

The ongoing “Complete Federico Fellini” program at the Harvard Film Archive nears completion with “Intervista” (1987, Monday) the director’s meta take on directing that has Marcello Mastroianni and Anita Ekberg playing themselves; an encore screening of “And the Sip Sails On” (1983, Friday); and Fellini’s raucous romp of a take on old Rome, “Satyricon” (1969, Saturday).

Roads to nowhere are hot this summer; The Brattle already hosted a “Lost in America” series about road trips gone awry, and the Kendall Cinema just wrapped one called “Road Life” with “Mad Max: Fury Road” (2015). This week at the Somerville Theatre comes a three-day run (starting Monday) of David Lynch’s trippy, mesmerizing warm-up for “Mulholland Drive” (2001): “Lost Highway” (1997), which in all its haunting, atmospheric discombobulation has something to do with a murder, a moll, a musician and videotapes. Bill Pullman and Patrica Arquette star. There’s also a midnight screening of Andrey Konchalovskiy’s great existential train ride to oblivion, “Runaway Train” (1985), with killer performances by Jon Voight and Eric Roberts as Alaskan prison escapees and Rebecca De Mornay as a train engineer – the two lads were Oscar-nominated, and De Mornay should have been as well. The tight narrative is intriguingly based on a story idea by Akira Kurosawa, and the Russian-born Konchalovskiy had often collaborated with celebrated Russian director Andrei Tarkovsky (the pair co-wrote the 1966 epic “Andrei Rublev”).”Runaway Train” plays Wednesday at 11:59 p.m. (Tom Meek)

Dan Trachtenberg (“The Boys,” “10 Cloverfield Lane”) reboots the “Predator” series with this origin story of sorts in which the dreadlock-adorned alien ever on intergalactic safari arrives on Earth some 300 years ago, looking to take the head of the toughest warrior around. In the 1987 original set in the modern-day jungles of South America, that was Arnold Schwarzenegger; here, it’s a Comanche teen named Naru (Amber Midthunder), a young woman who already has enough hills to surmount to earn the mantle of warrior – male bullies and a hulking grizzly – before dealing with the cloaked extraterrestrial with far superior weapon tech. The FX and cinematography of the pristine New World impress as the film checks the boxes of the franchise as well as lending a voice to the Native American experience. It employs a near-all native cast. There’s even French fur trappers in the mix, whose colonial interests are even more nefarious than the space hunter’s blood sport objective. (Tom Meek) On Hulu starting Friday.

This Netflix adaptation resembles Jane Austen’s last novel: Family and friends “persuade” Anne Elliot (Dakota Johnson) to break off her engagement to Frederick Wentworth (hunk Cosmo Jarvis, of “Lady Macbeth”) because he’s without money or title. Eight years later, the eligible bachelor has both, and the lovelorn heroine swigs wine from the bottle and weeps in her bed while clutching a bunny. Most of the dialogue is monologue as Anne talks directly to the camera, breaks the fourth wall and dishes to the viewer as her confidante. Think Napoleonic-era style meets “Bridget Jones’s Diary” (2001) without the complaints about weight loss, but with all the heroine’s clumsiness and awkwardness. Watching Johnson do comedy is a nice change of pace from the volatile, burdened sexy young mom in “The Lost Daughter” (2021) or the unlikely magnetic, mysterious doyenne dancer in “Suspiria” (2018). Modernizing and departing from the source material would be fine if the film had retained the original’s spirit, but casting smoldering Johnson ruins any suspension of disbelief that Anne will be sentenced to a miserable, obscure life with her mean, idiotic but attractive family. The anachronistic armchair psychology about narcissism and self-care could work if the proceedings were not so dull and angst-filled. Thank god for race-bending, otherwise Henry Golding would not be cast as the mischievous Mr. Elliot. Golding and Johnson’s chemistry is electric, but alas the film decides to remain faithful and keeps them apart. Fervent Austen fans will hate this film, but acolytes may find it entertaining. (Sarah Vincent) On Netflix.

Connor Rickman’s lo-fi family drama takes place at the Utah ranch of a patriarch who has died, for the most estranged from his children Della (Sarah McLoney) and Jamie (Aaron Kramer). The two are also estranged from each other, but reunite at the ranch with Della’s hubby Eli (Blake Webb) to execute the will and divvy up the “lot” of classic cars dad has amassed. In metes we get that big, burly Jamie has had a drug habit and been written out of the will, though he can have a consolation car or two. Della, the executor of the will, holds the reins; sour grapes, dark secrets and reveals take center stage. Turns out Jamie has a violent streak, something Eli has experienced, and Eli’s been making financial deal Della’s not been in on. The performances range from acceptable (Webb as the callow hubby) to good (Kramer as the bullying brother) to excellent (McLoney as the jittery, conflicted Della).The characters aren’t necessarily people you want to spend much time with, even onscreen. One could easily see this as a stage play, but it feels full-bodied due to the camerawork and gorgeous shots of mood-matching, winter-kissed Utah – something even more impressive when you learn that Rickman allegedly did this all for like $15,000 and in five days. (Assume that’s without post-production.) (Tom Meek) On Amazon Prime Video and other services.

“Bob’s Burgers,” that Fox family series overshadowed by “The Simpsons” that you may or may not be aware of, gets its big-screen due. Can’t say I was an avid watcher of the series – not because it lacked, but because I lacked time – but I was pleased to make its acquaintance. It’s shaggier and more intimate than “The Simpsons” and reminds me some of the old “King of the Hill” show. What to know? Bob (H. Jon Benjamin) runs a small restaurant in an unremarkable part of the city next to a funeral home and across the street from a fancy Italian eatery run by his nemesis. His wife Linda (John Roberts) is an energetic optimist to offset Bob’s gloomy, it’s-gonna-end-badly fears. Then there’s their three children: socially awkward and newly lovelorn teen Tina (Dan Mintz); reclusive, creative Gene (Eugene Mirman); and the youngest, fierce firecracker Louise (Kristen Schaal), who still wears her preschool rabbit-ear hat. Just don’t call her “baby.” The setup has the burger joint on the financial brink and a banker who couldn’t give two hoots, a giant sinkhole that appears out front, Tina’s desires to get close to a boy at school, an eccentric landlord (Kevin Kline) who might be an ally, and mopey best customer Teddy (Larry Murphy), who keeps coming up with ways to save Bob’s. The cast often break into song, it’s all whimsical and spritely and a fun representation of the familial struggles we all go though. (Tom Meek) On HBO Max.