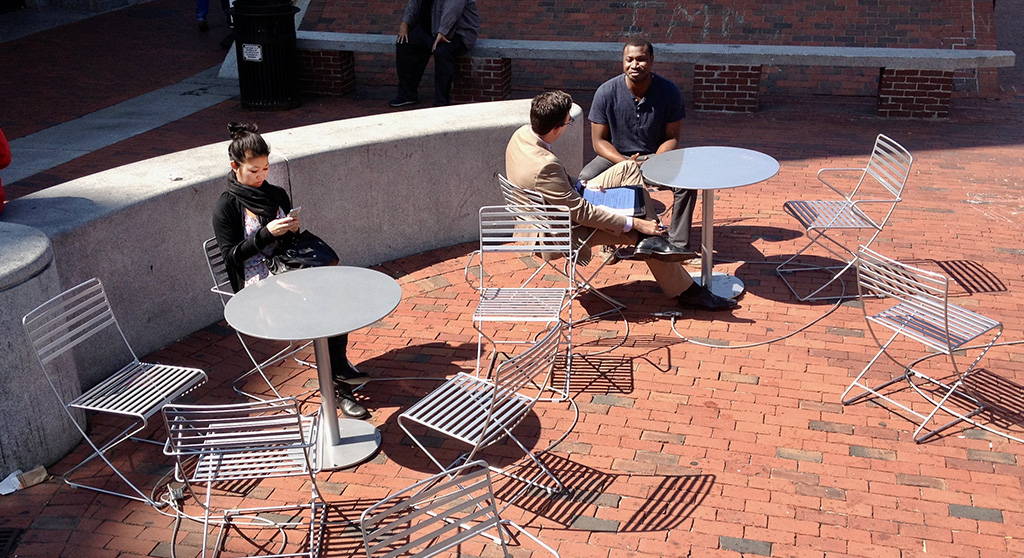 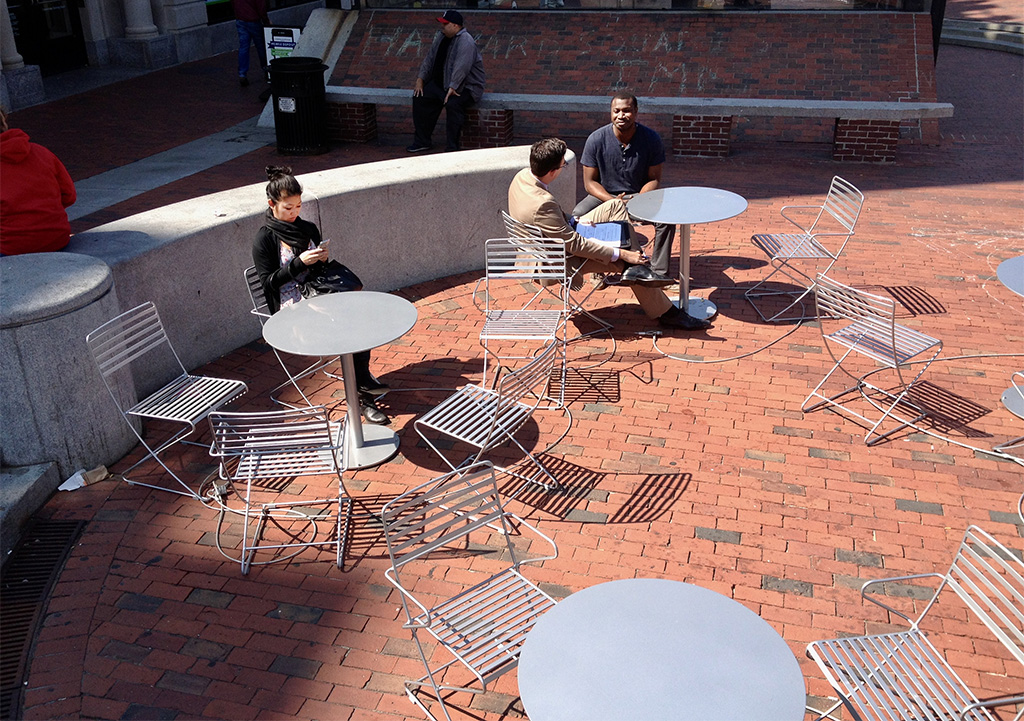 One use for The Pit in Harvard Square in September 2013. A group is before the Historical Commission on Thursday with a request to landmark and preserve the site. (Photo: Marc Levy)

City Council special meeting, 5:30 p.m. Monday. Covid never really went away, and this sole council meeting for July and August marks the arrival of monkeypox: Not only will acting city manager Owen O’Riordan report “relative to a Covid-19 and monkeypox update,” but there’s a call to “prepare for a monkeypox outbreak” in Cambridge. There’s also a sounding of the alarm on drought conditions, and maybe a fourth crisis in departing staff – an unusually long list of 44 resolutions is filled with retirements from among first responders and city agencies and departments.

O’Riordan presents the first annual report on effects of the Affordable Housing Overlay (more than 25 sites assessed for potential development; five AHO developments underway) and on how to update the city’s homeownership programs (proposals are expected this year, decisions on them in early 2023). His office can replace that business with orders likely to pass on banning fur apparel sales; getting ID badges for city workers; pulling together information on the how the local recreational cannabis industry is coming along; and responding to questions on the developer “linkage” fees that fund affordable housing raised at Wednesday’s Ordinance Committee hearing. Councillors want a breakdown of the $44 million received since 2019 through the current incentive zoning program – by project size – and to address how to start charging developers by tiers and with marginal rates that would encourage some smaller construction projects.

New proposals from councillor Paul Toner include a look at ways to make up for an increasingly unreliable MBTA with city-owned shuttle buses or allowing residents to use shuttles run by Lesley University, Harvard and the Massachusetts Institute of Technology; and for the city to try running its own delivery service for restaurants and local businesses, would would be cheaper for businesses and customers than third-party, for-profit delivery services such as DoorDash. (This is also the night a working group recommends making the Route 1 bus fare-free on a trial basis.) E. Denise Simmons seeks a Task Force on Cambridge’s African American/Black Residents to get a “grasp on the status and the needs of this community” and a Black Men and Boys Commission to reflect that the groups “continue to face discrimination and the disproportionate impacts of violence.”

Adding length may be two items due to return from the June 27 meeting: A review of “the dramatically growing need for expanded traffic calming, traffic signals and Vision Zero infrastructure through the city”; and appropriating $4.5 million requested to assess renovations on empty city property at 105 Windsor St., a 13,000-square-foot building in The Port neighborhood that was built in 1868 and known for a long time as the Boardman School. Councillor Quinton Zondervan has historical information to add about the structure, which could become community meeting space or be used for public art, education and exhibitions, a Cambridge history museum or city offices, and asks for assurances on a public process to determine its use. Another recurring issue gets a report: implementation of universal pre-kindergarten, with a working group recommending, among other things, that the city should lower the entry age and split junior kindergarten and kindergarten.

Brattle Street community meeting, 6 to 8 p.m. Tuesday. A Third meeting (after sessions May 3 and June 21) about safety improvements to Brattle Street between Mason and Mount Auburn streets that include separated bike lanes and changes at pedestrian crossings. Watchable by Zoom video conferencing.

Ordinance Committee, 5:30 to 7:30 p.m. Wednesday. This committee run by city councillors Marc McGovern and Quinton Zondervan will explore a law removing parking minimums and maximums, which had supporters and skeptics when last we wrote about in February. The committee meets at City Hall, 795 Massachusetts Ave., Central Square. Televised and watchable by Zoom video conferencing.

Historical Commission, 6 p.m. Thursday. Big things are being discussed in Harvard Square, including the formal proposal of the two-way separated bike lanes being discussed Tuesday for Brattle Street between Mason and Craigie streets; a proposal to refresh the grubby Waugh Building, the brick front of which went up in 1973 and now holds an AT&T store and Breathe yoga studio; and a citizen petition to explore landmarking and preserving The Pit, the sunken brick hangout area that would be flattened during a remake of the T station plaza and newsstand building. (And that many people thought they were saying goodbye to at a June public party.) “The destruction of this community space and its conversion into one focused on consumption is in glaring contradiction to the history of The Pit, but, just as importantly, it is the loss of an invaluable resource as one of the last remaining public spaces of its kind in Harvard Square,” say the nearly 40 signers of a petition. “Those supporting the redevelopment of the Pit argue that it needs to be redesigned to bring it into” compliance with the Americans With Disabilities Act. “We believe this could be done in a way that better preserves and honors The Pit’s unique history.”

There’s also the case of 12 Lakeview Ave., West Cambridge, a 10,751-square-foot single-family home from 1846 for which owners were given permission to renovate and, in the eyes of Inspectional Services, went too far. Now the owners must seek “retroactive application to demolish house.” Watchable by Zoom video conferencing.