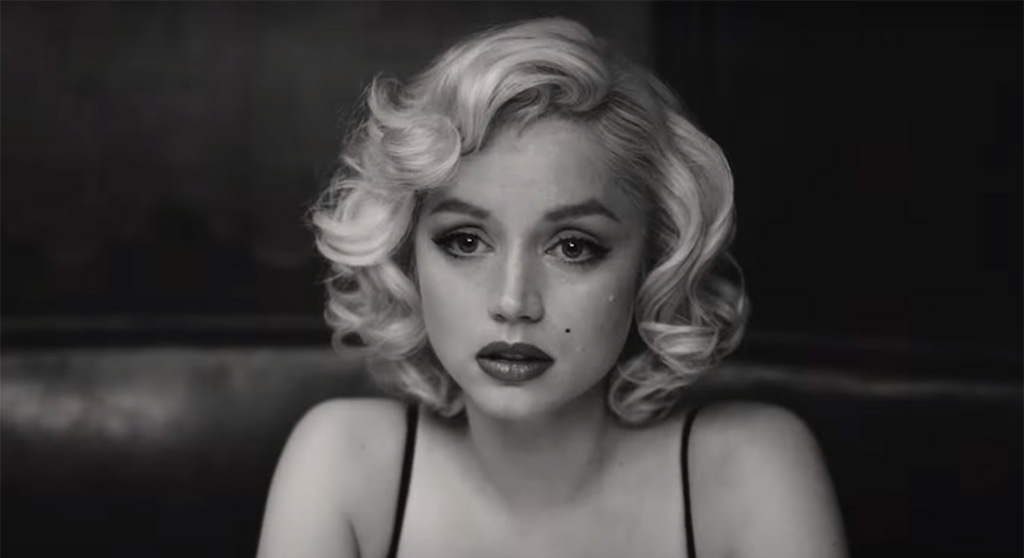 Andrew Dominik’s new spin on the legacy of Marilyn Monroe is a lurid layer cake of sex and spectacle, with occasional intimate segues into a vulnerable soul screaming for love and a safe space. “Blonde” is also a downright riveting flick from frame one until the credits roll; just how much of it is true is another issue. Based on Joyce Carol Oates’ mega-paged tome, which is admittedly fictionalized, there’s threesomes, sexual assault, on-set meltdowns, daddy issues, delusions, emotional juicing and more – enough to earn the film an NC-17 rating. If you take anything from the film, it’s that Monroe, for all her accomplishments and fame, led a pretty shitty life from start to finish, thanks mostly to men who wanted to control her, own her and consume her.

There are a few reasons for the film’s engrossing success, even though it feels so opportunistic and exploitative that you want it to fail. First are the stylistic choices by Dominik, such as cutting in and out of black and white, impressive recreation of screens from Monroe classics such as “Some Like it Hot” and “Niagara,” and the hard Marilyn POV that pays off – kind of – when she’s with JFK and pumped up on sedatives by a doctor ever slinking around the edges of the set. There’s also an emotive score by Nick Cave and Warren Ellis and, of course and most of all, Ana de Armas, who conjures Monroe effortlessly: her breathy, hazy intones and the toggle between perfect shiny object before the camera and hot troubled mess otherwise.

The young Norma Jeane (Lily Fisher) as painted has daddy issues – namely that she doesn’t have one, and it becomes an affliction that eats at her over time. Later in life Marilyn refers to her husbands in wispy coos as “daddy.” It’s heavy-handed but fits right in, as men and possible father figures loom large, for the most part with unpleasant results. An early first interview at a studio with a Mr. Z (Zanuck?) comes with requisite (bent-over-the) desk sex, whether wanted or not. Then there’s the hubbies, Joe DiMaggio (Bobby Cannavale), protective and sensitive until he gets fed up with Marilyn’s sex-bomb image and becomes abusive and worse, and playwright Arthur Miller (Adrien Brody), in touch with Marilyn’s inner demons but inert when it comes to helping. The real kicker is JFK (Caspar Phillipson), lounging on a bed in hotel room, shirtless but in his infamous back brace, on the phone conducting presidential business. When Marilyn enters, passed on by an agent keeping watch at the suite’s open door, he gives her a series of gestures imploring oral service – the door remains open and Dominik (“Killing Them Softly,” “The Assassination of Jesse James by the Coward Robert Ford ”) invites us to join in, dropping the camera right into the middle of the act. There’s no full frontal, but the experience is overwhelmingly visceral. Given all that came before, it’s just another indignity in the life of Ms. Monroe. The time Marilyn does find true comfort in the men’s arms, it’s an ongoing, imagined three-way romance with Charlie Chaplin Jr. (Xavier Samuel) and Edward G. Robinson Jr. (Evan Williams), racily rendered but also one of the movie’s more piquant and liberating tear-aways.

This isn’t the first time the inner turmoil of Marilyn has deconstructed and rewritten the script for Hollywood’s most iconic starlet. Back in 2011 Michelle Williams played Monroe at odds with Laurence Olivier on the set of “The Prince and the Showgirl” (1957) in Simon Curtis’ “My Week with Marilyn.” Much here is asked of Armas, who is topless almost as much as she’s not. As Ryan Gosling’s virtual love interest Joi in “Blade Runner 2049” (2017), she demonstrated the sensuality gene that was such an ingrained part of Monroe’s public persona. She notched comedic flair in “Knives Out” (2019), lively action chops in the recent Bond blast “No Time to Die” (2021) and, maybe more to the end of the Monroe role, played an emotionally and sexually complex wife in Adrien Lyne’s twisted erotic thriller “Deep Water” this year.

Like Oates’ book, “Blonde” is long, nearly three hours, but it ticks by in a sprightly way due mostly to the manic nature of Monroe’s depicted private life, brought to crescendos and crashes by Armas’ all-in effort. The cinematography by Chayse Irvin (“BlacKkKlansman”) is another staunch asset, as is Julianne Nicholson’s turn as Marilyn’s unstable single mother. It’s an undeniably well crafted film that rescripts history and delivers revelation under the guise of verisimilitude. The question is, does it really do its subject justice?