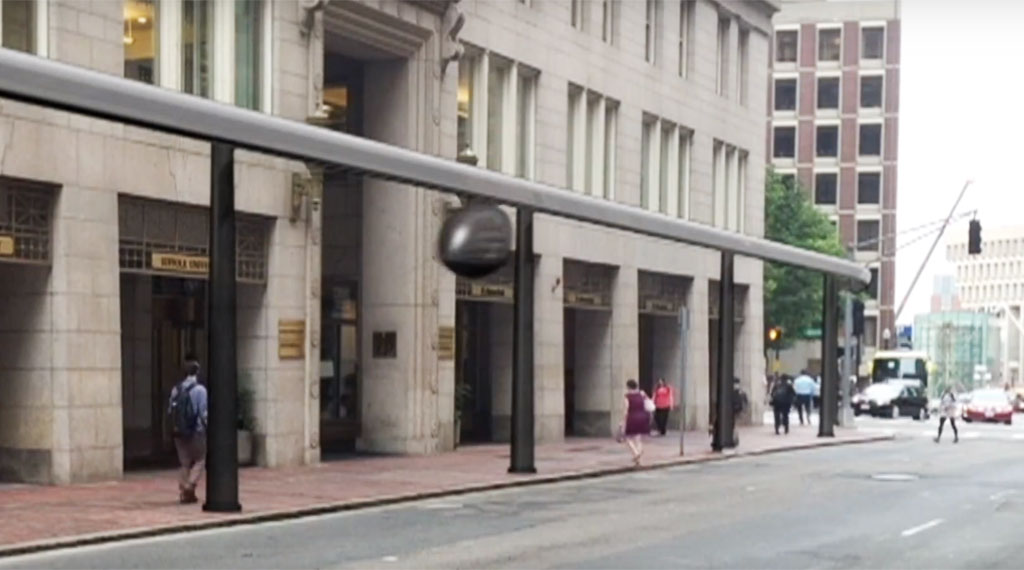 The company Transit X proposes raising a pod-based people mover on rails above the ground.

City Council, 5:30 p.m. Monday. Councillors are looking to the future, from the super practical (looking to rework the Cambridge Community Electricity program and the rules of the Memorial Tree Program rules to encourage more green energy and plantings) to the potentially pie-in-the-sky: Councillors Craig Kelley, Quinton Zondervan and Dennis Carlone want to see if Cambridge will be among the first to put a Transit X pod-style overhead transit system in place. There’s also a formal order from councillor Tim Toomey to see whether the city has an eye on its aging water pipes since the catastrophic flooding just seen in West Cambridge. The City Manager’s Office, meanwhile, is asking permission to keep the Out of Town Newsstand operating in Harvard Square’s kiosk until renovations start in mid-2019; holding off on promising public cooling centers for heat waves; promising a comprehensive look for bias in “inclusionary” affordable housing units; and agreeing that “separated bike facilities as identified in the bicycle plan, and improved transit amenities and operations are critical to the success” of the $34 million redo of River Street and Carl Barron Plaza, since Zondervan, Carlone, Mayor Marc McGovern and vice mayor Jan Devereux asked in November. (Work on River Street is expected to start next year.)

Ordinance Committee, 3 p.m. Tuesday. It was just a couple of months ago the Planning Board heard a request for an Ascend medical marijuana dispensary to go into the Lechmere Rug site at 200 Monsignor O’Brien Highway – with the hope of someday selling recreational marijuana too. Now this committee run by city councillors Dennis Carlone and Craig Kelley is hearing a request to rezone 234 Monsignor O’Brien Highway (now a car stereo and modification shop) for a potential recreational marijuana shop. That’s just 423 feet away; the current standard is that medical marijuana dispensaries must be at least 1,800 feet apart, though not necessarily for “core areas,” and that’s not required for economic empowerment applicants who were most disadvantaged by the war on drugs. There’s also discussion about whether 1,800 feet is an appropriate distance.

Mexican food moves in; candle issue may be relit

License Commission, 2 p.m. Wednesday. Among licensing items on a seven-page agenda are applications for a 132-person-occupancy (including rooftop) Mex Taqueria & Bar at 500 Technology Square in Kendall Square and an unrelated 46-person-occupancy Tex Mex Eats restaurant at 1193 Cambridge St., Inman Square, the former Magnolias and Tupelo. A lot of unused licenses are likely to be taken, including from the Thalia Theatre, 288A Green St., Central Square, and the commission will decide whether to punish UpperWest, 1 Cedar St., for the fire department’s failure to present a law saying the wine bar and charcuterie couldn’t have candles.

What lies in the path of the Grand Junction

Cambridge Redevelopment Authority, 5:30 p.m. Wednesday. Expect an update on the Foundry community building in East Cambridge and a presentation explaining the Grand Junction Overlay Zoning Proposal (in which the Alexandria Real Estate company wants the city to bargain for a long-wanted public, multi-use path because the company owns a potentially vital piece of property).

This post was updated Jan. 16, 2019, to reflect the License Commission correcting a typo about total occupancy of the Tex Mex Eats restaurant.