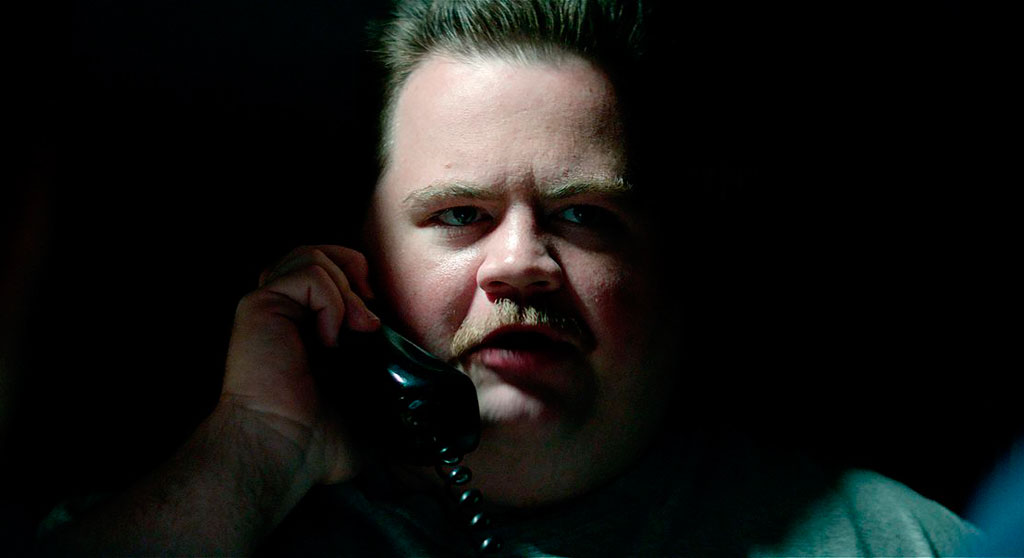 In talking with a friend about “Two Popes,” the excellently acted and well-shot papal bore-fest, one point that came up about films dealing with “true events” was that flawed characters and quirky happenings on the fringe often made for a more compelling narrative. Take “Sully” (2016) or “I, Tonya” (2017). The former did an end run around on Miracle on the Hudson pilot Chesley Sullenberger, chronicling the hero’s personal hell while being investigated and under suspicion by the Federal Aviation Administration, while the latter peeled back the mask of villainy on the scorned figure skater for her husband’s misguided hit on a publicly adored rival. 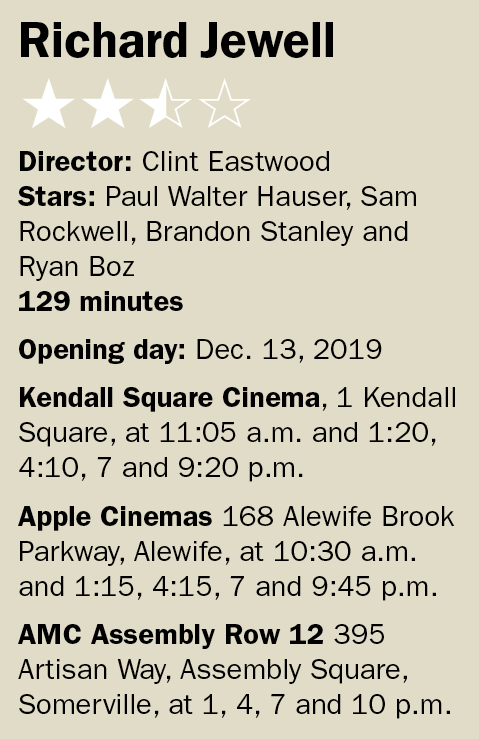 Clint Eastwood directed “Sully” and Paul Walter Hauser played one of the goons who took a lead pipe to Nancy Kerrigan’s knee in “I, Tonya,” so it’s fitting that the two pair up for “Richard Jewell,” about the surreal ordeal surrounding the portly security guard of the title, once under investigation for a bombing in Centennial Park during the 1996 Olympic Games in Atlanta. Nicely, the story bookends with the relationship between Jewell (Hauser) and Watson Bryant (Sam Rockwell), a snippy, dismissive lapdog of an attorney. It’s at his law firm that we first meet Jewell as a mail delivery clerk, before he moves on to pursuing his dream of being a law enforcement officer and ends up at Centennial Park.

Up to the bombing – which comes midway through – the character illustration of Jewell is quite something. Sure he’s got the countenance of a rube, lives at home with mom (Kathy Bates, perfectly understated) and has buddies with mullets who look like white supremacists, but his expressed desire to serve and protect comes off as genuine. It’s hard to fault a man with ambitions – that is, until you learn that as a college campus security officer, Jewell’s something of an overreaching megalomaniac, pulling over students on the highway outside campus when suspected of drinking and driving and barging in for dorm room searches. At once, you pity Jewell and see the seeds of George Zimmerman.

Given that MO in the aftermath of the explosion, it’s no surprise that Jewell comes under the suspicion of the FBI (led by Jon Hamm), which runs a sloppy investigation, settling on Jewell solely because he fits a profile. Agents allege he stashed the bomb (which he found and reported to police authorities so people could be evacuated before it went off) so he could claim hero status and gain a foothold on the ladder of his law enforcement ambitions. When he realizes he is the investigation and not part of the effort, Jewell dials up Bryant. From there, the legal wrangle, the cheap manipulative machinations by the FBI (Hey, Richard, why don’t you come by for a training video and pretend you’re a terrorist) and some seedy investigative techniques (boozing and sleeping her way to a scoop, a tiresome and unwanted fiction) by Atlanta Journal-Constitution reporter Kathy Scruggs (Olivia Wilde, who bites into the role and owns it with spit and verve), gives the film lift when it’s already soaring.

The cast is top-to-bottom one of the best of the year (“Knives Out,” “Bombshell” and “The Report” also in that conversation), but the film should be noted for Hauser’s breakout performance. In “I, Tonya” and “BlacKKKlansman” (2108) he was handed 2D scuzzballs and played them with pizazz; here he gets to go a level deeper, imbuing Jewell with everyman soul and vulnerability so fully that one can only hope he gets the chance to range out and play against type in the short future. The film too marks a nice return to form for Eastwood, who after the dull and listless “15:17 to Paris” and flat “The Mule” (both 2018), made you wonder if his genius wasn’t on the wane. Age should not be mentioned as a factor, but it’s fair to note that at 90, the filmmaker’s acumen for human connection is as sharp as ever. The script by Billy Ray (“Captain Phillips”) based on the Vanity Fair article “American Nightmare: The Ballad of Richard Jewell,” by Marie Brenner, holds Jewell (who died in 2007 from diabetes) as a clear victim – he was later vindicated when the real bomber was captured and confessed – but in execution, Eastwood and Hauser wisely don’t play him like one. Eastwood and Ray do, however, take the FBI and the fourth estate to task, not just in the form of Hamm’s manipulative operative or Wilde’s scrappy snoop (one has to wonder how their real-life counterparts feel about the near villainous portrayals – through Scruggs only has family and friends for recourse, as she died in 2001), but in clips of the revered Tom Brokaw pointing the finger at Jewell. (NBC was later sued). It’s a telling portrait of society’s rush to judgment, and illuminating as that may be, the real pull of “Richard Jewell” is the evolving relationship between its wronged protagonist and his attorney. Their dynamic and bond propels the film beyond the factual record, and makes the tragedy and travesty, human and universal.