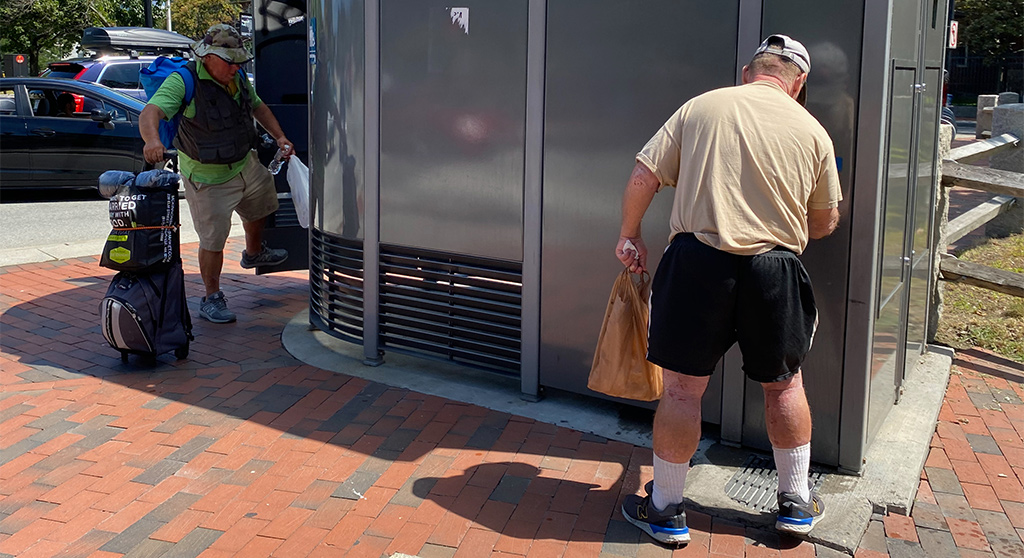 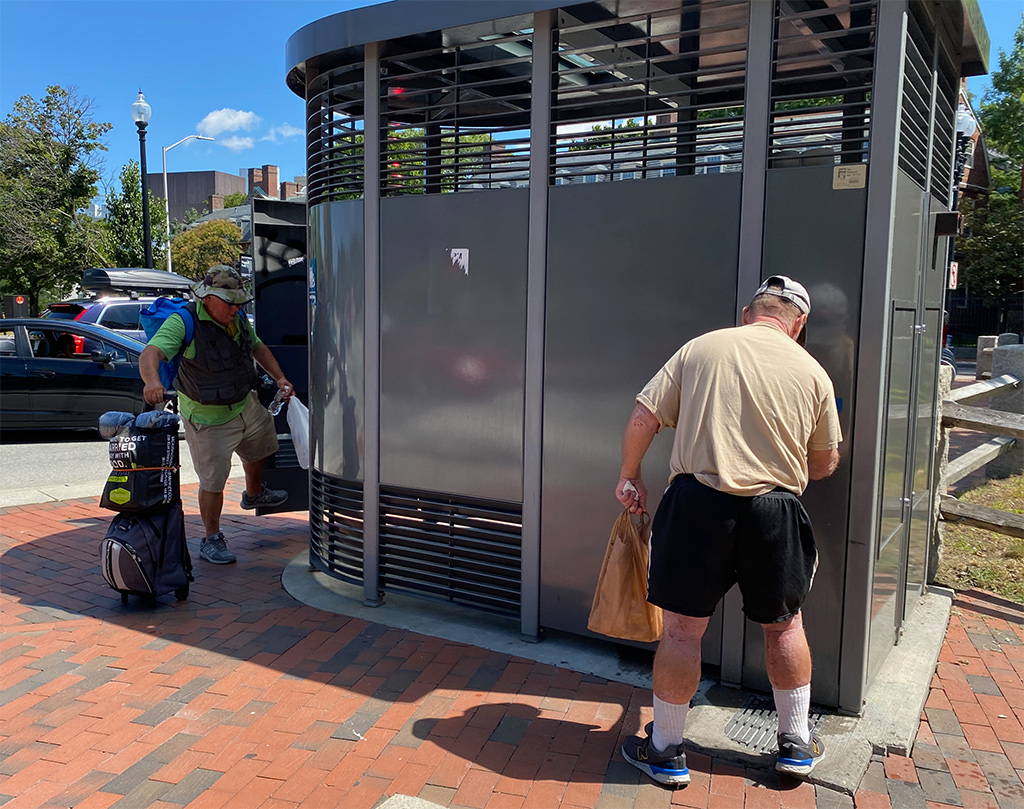 The public toilet in Harvard Square, in use in August. (Photo: Marc Levy)

City Council, 5:30 p.m. Monday. One of the most persistent complaints of the past couple years of housing crisis has been about Cambridge’s HomeBridge program, which helps residents buy homes affordably, but fails to help families build wealth through equity because the homes cannot be passed down to children; they must ultimately be returned to city stock and become available to another buyer. The mayor and vice mayor are calling officially for HomeBridge and the city’s Affordable Home Ownership Program to address the problem of failing “to address the impacts of historic racist housing policies, such as redlining, that have historically [hurt] people of color,” while two councillors are asking for a big increase in housing stability support, such as boosting rental assistance funds by $100,000 to a total of $315,000 for the year. Yet there are other things important to the community beside affordable housing, and a group from The Port is asking the city to secure the parking lot of the Margaret Fuller Neighborhood House for open space and relocate the affordable housing planned for the site. (And for the homeless, a group of councillors want city staff to adopt the access principles of the Bathroom Bill of Rights.)

One returning issue Monday is also about housing: a plan to increase the affordable homeownership stock over the next 10 years, paying for construction with a bond issue of “no less than $500 million” that can undo some racial discrimination by offering the units first to black and brown people who grew up in Cambridge. It was bumped for extended discussion from last week by councillor E. Denise Simmons using her “charter right,” even though she was a co-sponsor – and she charter righted also an order to demilitarize our police department, including destroying (and recycling) all rifles and shotguns and getting rid of the city’s armored vehicle. There’s a city task force already working on such issues, and the charter right meant order author Quinton Zondervan didn’t get a chance to explain his thinking. Other councillors, meanwhile, want the city to apply for state Shared Streets and Spaces grants, even though city staff have shown a lot of resistance to such programs over the past pandemic.

A one-year BIPOC Business Advisory Committee will begin meeting this summer to boost minority-owned commerce, though early action items are expected at the six-month mark, the city manager says. And the city is keeping an eye on water levels, considering recent droughts, and reporting that reservoir system storage is above 90 percent capacity and growing – below where it was in March 2020, but “significantly above” the drought periods of 2016-2017.

Planning Board, 6:30 p.m. Tuesday. The board’s less contentious topic comes first: the Broad Canal Zoning Petition, which vows to revitalize Kendall Square’s Main Street and Broad Canal – creating a pass-through between buildings that will connect the two and adding 7,000 square feet of commercial and entertainment space. Then comes the case of 2072 Massachusetts Ave., North Cambridge, a mixed-use proposal for a storefront and 48 affordable apartments over nine floors, where a neighborhood group has organized to protest the project’s size and question its implications for traffic, parking and safety, including its impact on the neighboring senior housing. Televised and watchable by Zoom video conferencing.

School Committee, 6 p.m. Thursday. The committee will consider which of two candidates to appoint as interim superintendent of schools. Superintendent Kenneth Salim will be gone as of June 30, two years before his contract is due to expire; an interim leader must begin work July 1 and serve through the end of the academic year, so a search for a permanent superintendent can begin in the summer. Televised and watchable by Zoom video conferencing.