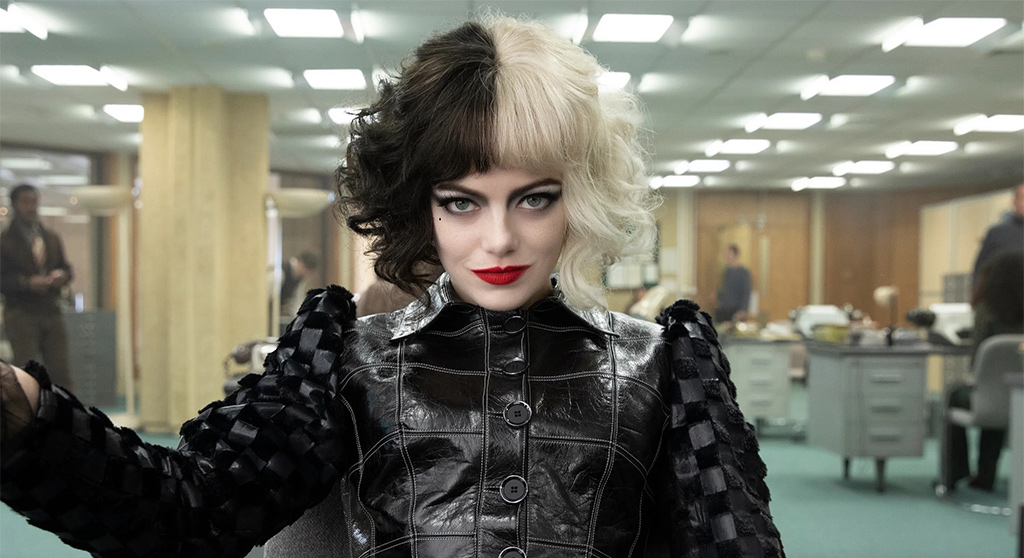 The backstory on Cruella de Vil, the villainess so indelible (that hair!) in Disney’s 60-year-old “One Hundred and One Dalmatians” franchise, is a dark one in the new “Cruella,” a bit more over the line than that of the studio’s “Maleficent” (2014). You could even say that its moody atmosphere and use of raucous era pop makes it feel more like “Joker” (2019) than a family friendly product from the Walt-O-Sphere.

Directed by Craig Gillespie, whose previous – and more dramatic – efforts such as “I, Tonya” (2017) or “The Finest Hours” (2016) don’t really feel like a pathway to a Disney go, competently rekindles a series opportunity here. The original 1961 adaptation of the Dodie Smith tale was the 17th animated film by the then burgeoning Disney empire; later (in the 1990s) there was a live-action take with Glenn Close as the yin-and-yang tressed dog-snatcher. In this prequel, we get a young Cruella/Estella, whose mom is harried by a trio of vicious Dalmatians on the grounds of a grand British estate (something up high and oceanside, akin to Manderley in “Rebecca”) and falls off a cliff, leaving Estella to fend for herself. Down on her luck and short on opportunity, the orphaned Estella falls in with a gang of street kids, grafting and scrapping to get by. Then, poof, some 15 years later in the ’60s/’70s (That soundtrack! The Clash, Supertramp, The Doors and ELO) she’s a cleaning lady (now played by Emma Stone, “La La Land” and “Birdman”) scrubbing the loo at a high-end designer’s boutique studio with the deep-seated goal of making trendy dresses herself. “Cruella,” it turns out, is more about haute fashion than Dalmatians.

The real fun to “Cruella” kicks in when Emma Thompson shows up as a brassy incarnation known as The Baroness, the Anna Wintour of British high society and fashion – anyone arriving at one of her galas with a more eye-grabbing dress than her is promptly escorted off the premises, and none too gently. After an accidental glimmer of Estelle’s talents (a boozy night of ambition rage sets it up) The Baroness rescues Estella from toilet duty and gives her the opportunity to design and create. It’s a happy working union for a moment, until Estella begins to learn of The Baroness’ sordid past and its possible impact on her childhood. To get at the truth, Estella hatches her Cruella alter-ego, with electric black and white shocks embossed by a vampy, Michelle Pfeiffer-esque Catwoman sass-itude. By day, the dour Estella toils under The Baroness’ demands; at night Cruella hosts flash mob fashion shows that steal The Baroness’ thunder, scoring all the critical high-fashion praise in the papers the next day.

It’s here that the game of catty cat-and-mouse between the two (or is that three?) becomes a bit overplayed. The film for the most part is imbued with a kind of dark, Tim Burton fairytale sprightliness, but it gets lost in the back-and-forth and the film sags some where it feels like there should be lift. Stone and Thompson bite deep into their roles and both succeed – especially Thompson – but the kitschy snazziness of caricature is mostly what registers. The film, written by committee, is clearly looking to turn Cruella the villain into something more heroic (which didn’t happen in the “Joker”) and it accomplishes that, if underwhelmingly. One of my favorite touches besides that soundtrack (some may see it as an unnecessary detraction; I didn’t) was Cruella’s pop-up fashion show band riffing Iggy Pop’s “I Want to be Your Dog.”